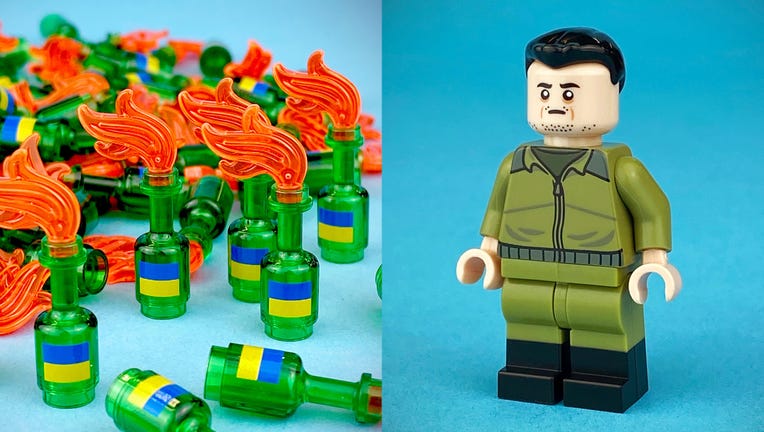 CHICAGO - A U.S.-based company putting its own unique twist on LEGO toys used its skill to create custom LEGOs of Ukrainian President Volodymyr Zelenskyy and toy Molotov cocktails and raised nearly $150,000 for Ukrainians affected by the war.

Independent retailer Citizen Brick, based in Chicago, launched a fundraiser earlier this month in response to the Russian military assault on Ukraine. The company debuted a custom Molotov cocktail for $10 and the mini-figure of Zelenskyy for $100 in a "limited" supply — all to benefit Direct Relief, a nonprofit humanitarian organization helping to bring medical supplies to people in Ukraine.

RELATED: Ukraine's Zelenskyy cites Pearl Harbor, 9/11 in appeal to US Congress for help against Russia

Citizen Brick says they use genuine LEGO products, which they then melt down and inject to create their own more eccentric designs.

The sale began on March 5 and quickly raised $16,540 within the first 24 hours, the company said.

"As you may have noticed, the minifigs sold out almost immediately. We made as many as possible in a frantic 24 hrs, with the CB crew coming in on their day off to print," Citizen Brick wrote in a March 6 update on Facebook. "We know there were some folks who tried to get one and couldn't. We hope they'll consider making a direct donation to a relevant charity nonetheless."

But this week, Citizen Brick offered another chance at purchasing the Ukrainian president figure "due to overwhelming interest." The company had said it hoped to raise $100,000.

Joe Trupia, Citizen Brick's owner, told FOX Television Stations on Thursday morning that the company had again sold out of the custom-made items and had raised a total of $145,387 — all to benefit Direct Relief.

"As of this morning, we're completely sold out of these items. It's not likely we'll be making more as we've exhausted our supplies of parts," Trupia said.

Direct Relief said it has deployed more than 30 tons of medical aid to Ukraine since the war broke out, which has now entered its fourth week.

Russian forces on Thursday continued bombarding major cities and shelling them from a distance, raining havoc on civilians. The death toll remains unknown, though Ukraine has said thousands of civilians have died.

The fighting has led more than 3 million people to flee Ukraine, according to U.N. estimates.