Repairs on cracked asphalt of Interstate 4 causes traffic slow down

The crack was on a new part of Interstate 4 in Orlando.

ORLANDO, Fla. - All lanes are back open in Downtown Orlando after asphalt had to be replaced on a brand new portion of I-4, causing a big slow down on Thursday morning.

A Florida Department of Transportation (FDOT) spokesperson said that the asphalt was resurfaced last night. However, it had to be removed and replaced on Thursday morning after a pothole was discovered in the center lane of I-4 eastbound, between Anderson and the 408.

Hany Elbanna, the President of HSE Contractors, told FOX 35 Orlando that "obviously it’s a high-traffic highway and you would want people to be more cautious when they’re cleaning off the dust, measuring the moisture level."

FDOT said that the problem could be blamed on the moisture that caused the asphalt to crack but they are still investigating.

Elbanna added that "the most likely reason it happens in Central Florida is the moisture. The moisture comes when you have a lime rock layer. After you compact that lime rock very well, the moisture can come from the rain or the base course under the lime rock."

He said that there could also be a problem with the asphalt design mix or with the dirt not being cleaned off from the asphalt.

"If that’s not done properly, you’re putting the sand with the two layers -- so with the friction of the cars moving back and forth that ends up causing the potholes, Elbanna explained. "It is common, but it’s avoidable."

He said the issue can be avoided by moving quickly, especially with summertime showers, citing that "whenever we put down the lime rock layer, we try to quickly put the asphalt structure layer on top of it. And not wait because during that time rain could happen and moisture might accumulate and that’s when cracks start." 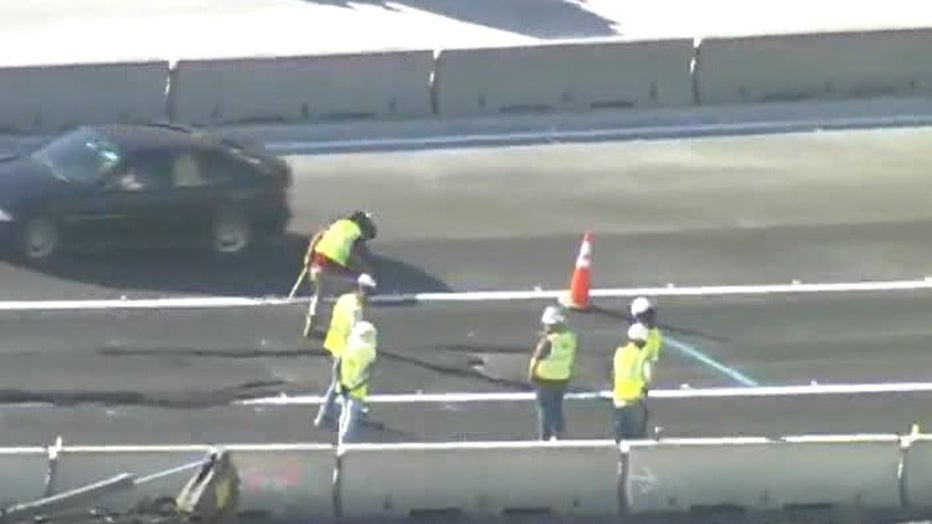 Lanes were back open by noon.