A 2-year-old child is in critical condition at the hospital after being attacked by a coyote in Dallas. Game wardens are now actively searching for the animal. The coyote is considered extremely dangerous.

DALLAS - A 2-year-old child is in critical condition at the hospital after being attacked by a coyote in Dallas.

Police said it happened around 8:30 a.m. Tuesday morning in the Lake Highlands area while the child was sitting on the front porch of a home on Royalpine Drive, which is not far from White Rock Creek.

The attack is unusual, but it's not the first aggressive coyote sighting in that area.

The child that was attacked underwent surgery.

Multiple agencies, including Texas Parks & Wildlife and USDA Wildlife Services are involved in the search. They are looking in a wooded area along White Rock Trail.

"This is extremely unusual," said Dallas Parks & Rec Urban Biologist Brett Johnson. "My understanding is the kid was on the porch, and the coyote approached."

A Dallas police officer later spotted the animal in a nearby park and shot at it, but it disappeared into the woods, where authorities set traps to capture it.

"When a coyote attacks, it’s usually an unwell coyote, a coyote that’s not healthy," explained Sam Kieschnick with Texas Parks & Wildlife. "That’s a coyote that should be removed from the population."

"The coyote most likely has a pretty good case of mange, and you can see the ribs on the side of it," Johnson said. "Looks like it’s fairly emaciated." 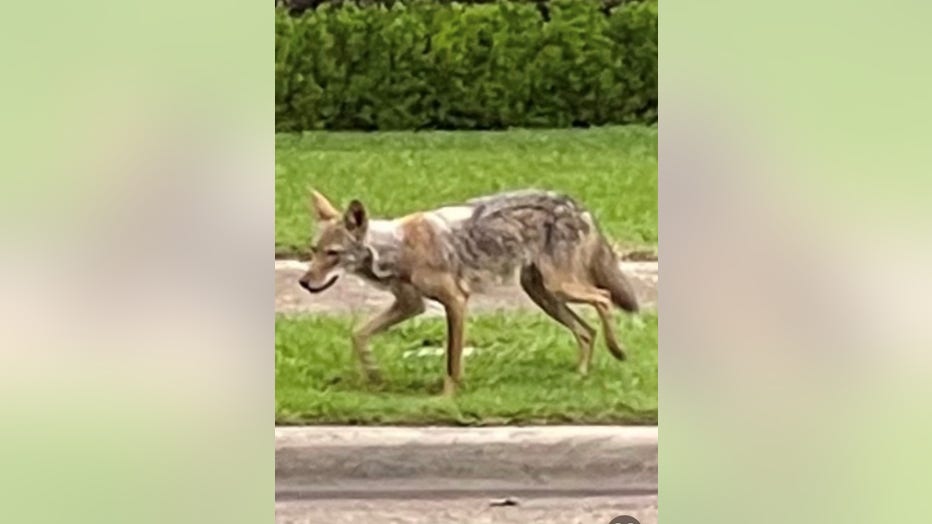 Nearby White Rock Elementary kept students inside for the day and asked students to be picked up by an adult at dismissal.

Neighbors in the area believe the same coyote has been spotted multiple times before and showed FOX 4 cell phone video of one roaming the neighborhood a few days earlier.

"It’s been unusual to see during the day," said neighbor Anthony Divenuti. "This has been probably five or six daytime sightings."

Another neighbor shared a surveillance video from the morning of April 25 showing their son running back inside the house as a coyote moved aggressively in his direction. It moved all the way up onto the front lawn.

Later that same day, neighbor Adam King ran a coyote off that was following a boy walking his dog.

King shared a Ring video of the incident.

Neighbors say they reported to the city multiple times. City officials say they are currently reviewing call records about coyote sightings in the area near the White Rock Trail Greenbelt, but so far they say the calls reviewed don’t describe concerning behavior.

Game wardens are now actively searching for the animal. Anyone who spots it is asked to call 911.

People who live in or visit the area should be on high alert. The coyote is considered extremely dangerous.