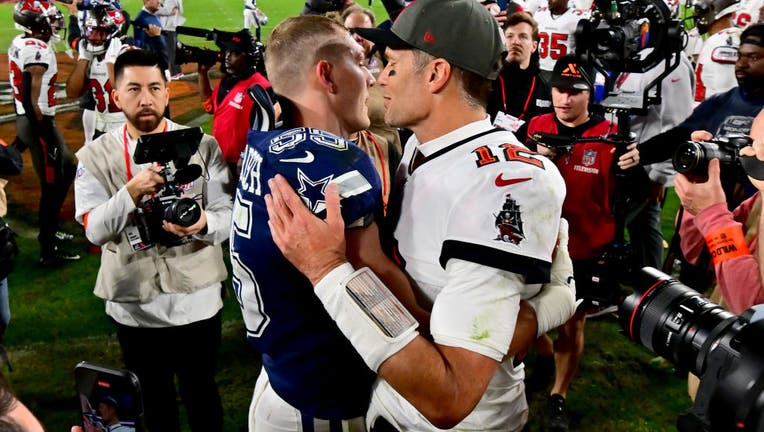 TAMPA, FLORIDA - JANUARY 16: Leighton Vander Esch #55 of the Dallas Cowboys and Tom Brady #12 of the Tampa Bay Buccaneers embrace on the field after their game in the NFC Wild Card playoff game at Raymond James Stadium on January 16, 2023 in Tampa, F

A scintillating wild-card weekend in the NFL playoffs ended with a snoozer.

The Dallas Cowboys cruised to a 31-14 win over Tom Brady and the Tampa Bay Buccaneers on Monday night. The Cowboys’ first road playoff win in 30 years was largely devoid of drama after a weekend full of tight games and incredible comebacks.

Now it’s on to the divisional round, which begins Saturday. In the AFC, the Chiefs will host the Jaguars while the Bills host the Bengals. In the NFC, the Cowboys travel to the 49ers while the Giants hit the road against the Eagles.

Wrapping up wild-card weekend on Monday night, Dallas quarterback Dak Prescott completed 25 of 33 passes for 305 yards and played turnover-free ball for the first time in eight games as the Cowboys dominated the listless Bucs in what may turn out to be Brady’s last game in a Tampa Bay uniform.

The blowout was an outlier after a weekend when no lead was safe.

The Bills blew a 17-point advantage before recovering to beat the Dolphins on Sunday. That narrow escape came less than 24 hours after the Jaguars overcame a 27-point deficit in one of the most stunning rallies in playoff history.

A loaded Sunday schedule saw the Bills escape with their 34-31 win over the Dolphins, the Giants outlast the Minnesota Vikings 31-24 and the Bengals hang on to beat the Baltimore Ravens 24-17.

All three of Sunday’s games were decided in the final minutes. In the nightcap, Sam Hubbard returned Baltimore quarterback Tyler Huntley’s fumble 98 yards for a tiebreaking touchdown in the fourth quarter, a stunning turn of events after the Ravens were poised to take the lead.

Huntley tried to go over the top of the line for the go-ahead score. But he was stood up by Germaine Pratt and stripped by Logan Wilson.

The ball went right to Hubbard at the 2, and the defensive end took off down the field for the longest fumble return for a touchdown in NFL postseason history. It also was the longest go-ahead TD in the fourth quarter in the playoffs.

In Sunday’s opener, Bills quarterback Josh Allen shrugged off a three-turnover outing by throwing two touchdown passes 3:11 apart in the third quarter. He finished 23 of 39 for 352 yards and three TDs, but also threw two interceptions and lost a fumble.

Giants quarterback Daniel Jones became one of the stars of wild-card weekend by leading sixth-seeded New York to its road win over No. 3 Minnesota. Jones — in his first playoff game — threw for 301 yards and two touchdowns and ran for 78 yards in a stellar all-around performance. Saquon Barkley rushed for two scores, including the tiebreaker midway through the fourth quarter.

On Saturday, rookie Brock Purdy and San Francisco beat the Seattle Seahawks 41-23, while Jacksonville capped its comeback by beating the Los Angeles Chargers 31-30.

The No. 1 seeds in the AFC and NFC — the Chiefs and Eagles — both got a bye through the wild-card weekend.

WHAT’S THE FORMAT FOR THE PLAYOFFS?

This is the third straight year of the current playoff format, which includes the top seven teams from both the AFC and the NFC.

The NFL re-seeds teams after each playoff round. That means no matter how the bracket started, the lowest-seeded team always travels to the highest-seeded team.

There are four rounds to the playoffs: The wild-card round just finished, the divisional round is during the upcoming weekend, the conference championship games are on Jan. 29 and the Super Bowl is scheduled for Feb. 12 in Glendale, Arizona.

WHAT CHANGED WITH BILLS-BENGALS CANCELLATION?

Players and fans watched in horror on Jan. 2 as Buffalo Bills safety Damar Hamlin collapsed on the field at Cincinnati when his heart stopped and he received CPR before leaving the field in an ambulance. Over the next week, those same players and fans reacted with joy at news of Hamlin’s recovery.

Even better news came Saturday: Hamlin visited with teammates at the Bills’ facility for the first time since being discharged from a Buffalo hospital.

The cancellation of the Bills-Bengals game because of Hamlin’s injury could lead to one big change to the AFC playoff format.

The AFC championship game would be played at a neutral site if the Chiefs and Bills reach that point under a rule adjustment approved by NFL owners. That’s because Buffalo (13-3) played one fewer game than Kansas City (14-3) and missed out on a chance to earn the top seed. The Bills beat the Chiefs 24-20 on Oct. 16 and would have held the tiebreaker had the teams finished with the same record. Buffalo lost 42-36 at Kansas City in a divisional-round classic last season.

The Chiefs would host the AFC title game against any other team, including the third-seeded Bengals (12-4).