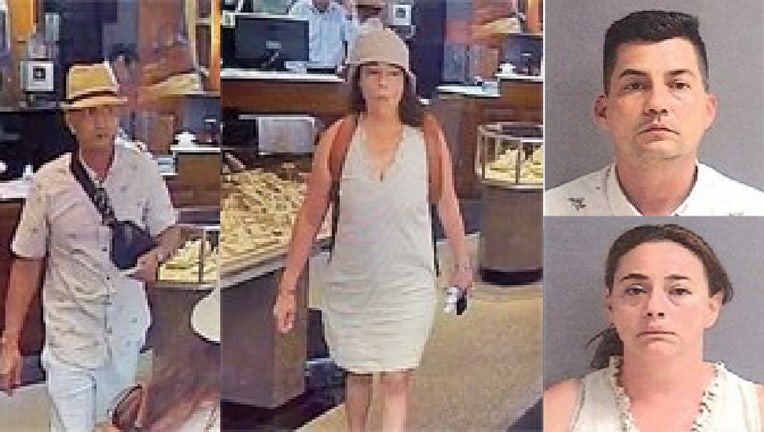 COCOA, Fla. - A man and a woman were arrested Tuesday for allegedly stealing a $29,000 diamond ring from a Central Florida jewelry store, according to police.

The Cocoa Police Department said Orlando Sanchez and Fatima Reyes-Gomez were arrested two hours after that theft as they reportedly attempted to steal from another jewelry store in the area.

Officers said the couple walked into a jewelry store on Brevard Avenue shortly after 11 a.m. Sanchez reportedly distracted one of the employees, as Reyes-Gomez reached over the counter and stole the ring, police said in a news release. The pair then left the store, and employees reported the theft a short later.

Store employees provided officers with surveillance video and a description of the suspects. According to police, officers alerted law enforcement statewide about the theft, and detectives were later contacted by authorities in Daytona Beach who said the same suspects had been arrested for a similar crime in their jurisdiction.

Police said the couple had multiple fraudulent passports and identifications along with large amounts of cash in their possession when they were found. The stolen ring, however, was not found.