Russia-Ukraine: Putin has 'significant combat power' he hasn't used yet

Russia's invasion of Ukraine continues to intensify, with troops moving closer to the capital of Kyiv from the ground. Pentagon spokesperson John Kirby said Russia clearly has intentions with respect to Kyiv but that Ukrainian forces have been quite effective at combating the incoming soldiers. Kirby noted that Russian President Vladimir Putin continues to escalate and still has "significant combat power" that he has yet to put into play.

The two big men standing shoulder to shoulder in The Associated Press photo taken Sunday in the mayor’s office in beleaguered Kyiv, Ukraine, were instantly recognizable to most boxing fans. Vitali and Wladimir Klitschko, the sons of a Soviet major general, are both former heavyweight champions and whenever one was in the ring, the other was always helping from the corner.

Now they’re in a fight unlike any they ever imagined. The prize for this one isn't a gaudy championship belt but the survival of their country.

Vitali Klitschko is helping lead it as mayor of Kyiv. His younger brother plays the role of chief second. 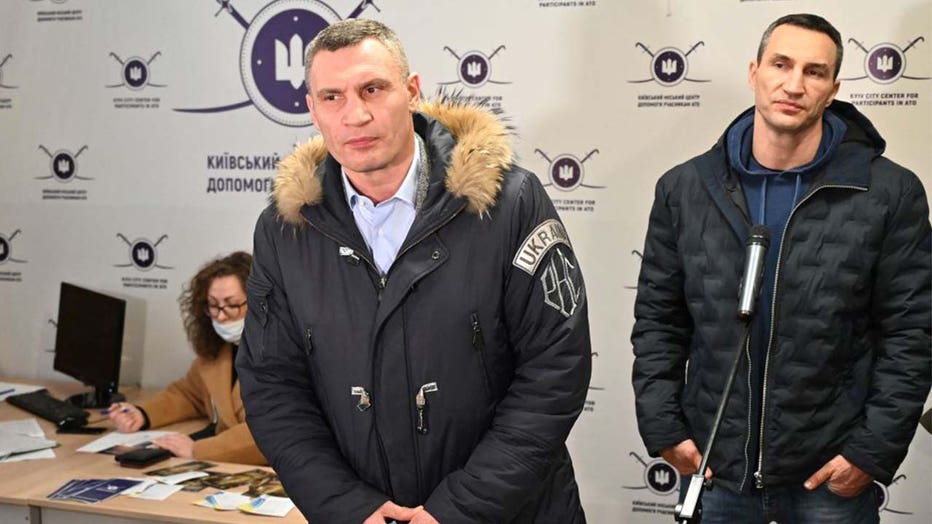 FILE - Kyiv mayor Vitali Klitschko (L) and his brother and former Ukrainian boxer Wladimir Klitschko (R) speak to the press during visit to a volunteers recruitment centre in Kiev on Feb. 2, 2022.

They’re a formidable pair, ready to do whatever it takes to defend their country against invading Russians. So far that hasn’t included armed combat, but both have made it clear they will fight in the streets if it comes to that.

And, in a rich Ukrainian boxing community, they’re not alone.

Vasiliy Lomachenko, a two-time Olympic gold medalist who some consider the best pound-for-pound fighter in the world, hastily flew home from Greece to don combat fatigues as a member of a defense battalion. He was pictured on his official Facebook page over the weekend with an assault rifle slung over his shoulder near Odessa. 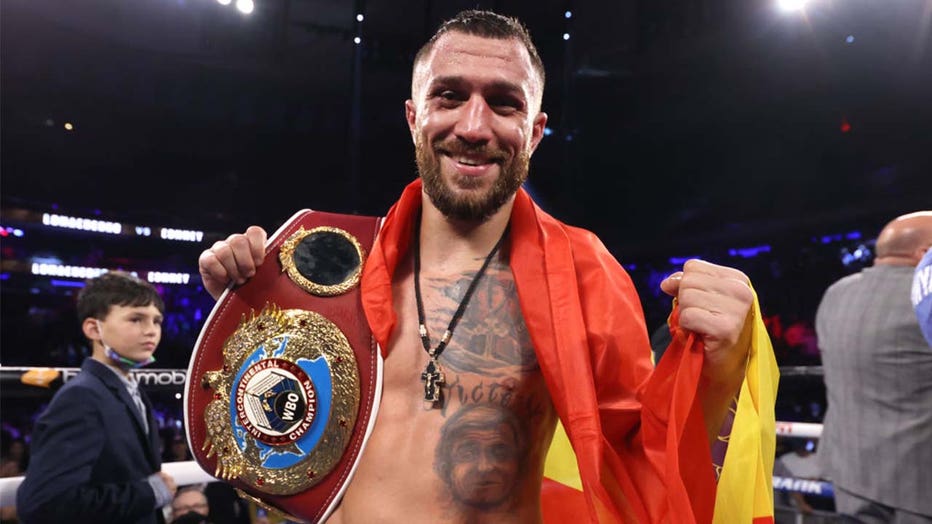 "The Belgorod-Dnestrovsky Territorial Defence Battalion has been formed and armed," the caption read. "In the territorial defence, boxer Vasiliy Lomachenko informed the mayor."

The current heavyweight champion is also in on the fight. Oleksandr Usyk returned home from London when Russia invaded his country and, instead of preparing for a possible rematch against Anthony Joshua this spring, he is getting ready to fight against Russians in his native land.

Both are potentially losing million dollar paydays — in Usyk’s case, the biggest purse of his career in a rematch with Joshua. But defending a belt and defending a country are two very different things.

On Sunday, Usyk posed not with gloves but an automatic rifle, flanked by three other armed men in the Kyiv Territorial Defense force. 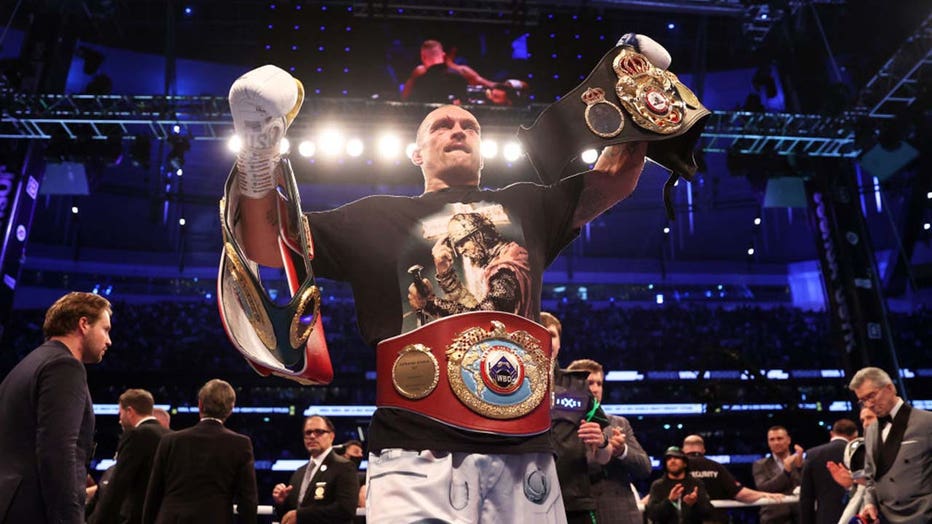 They’re all great fighters with proud legacies in the ring. When Wladimir Klitschko last fought in 2017, he and Joshua engaged in a thrilling knockdown bout before 90,000 at Wembley Stadium in London. Klitschko came off the canvas that night to deck the British champion before ultimately being stopped by the younger fighter.

And people in boxing still talk about Vitali Klitschko nearly getting the upper hand on Lennox Lewis in their heavyweight clash in Los Angeles in 2003 that ended only because the ring doctor stopped it when there was so much blood flowing down Klitschko’s face he couldn’t see.

None of the Ukrainian prizefighters ever backed down with gloves on. And they show no sign of backing down now, even with so much stacked up against them.

"Go back home," Vitali said when asked what he would tell Russian soldiers. "You have nothing to find here."

Usyk was even more blunt with his message.

"You are not at war with our government, our army," he said in a video posted on Twitter. "You are at war with the people. This is our land. We are at home."

Vitali Klitschko has been mayor of Kyiv since 2014, two years after he finally called it quits on a boxing career that earned him an Olympic gold medal and a world title. His brother was arguably even more successful, holding pieces of the heavyweight title while going 11 years without a defeat.

They grew up fighting in the Soviet amateur system and, while their technical styles didn’t endear them to boxing fans everywhere, they were extremely popular in Germany where they sold out arenas and stadiums for big fights.

And both have friends in high places.

"I am thinking of you, my friends," actor and politician Arnold Schwarzenegger tweeted, along with a picture of the brothers. "You were my heroes in the ring and you’re my heroes now."

On the Boxrec.com website that is the closest thing boxing has to a record book, the home page on Monday featured a picture of Vitali Klitschko holding an automatic rifle above the ratings.

Sadly, this is war, not sport. There is no referee, very few rules and extremely deadly weapons.

Still, with Russian troops threatening the city on Sunday, the brothers tried to stay upbeat inside the mayor’s office even as Vitali Klitschko warned of a looming humanitarian crisis as the city’s food and medicine supplies dry up.

"Right now, the most important question is to defend our country," he told the AP’s Francesca Ebel and Efrem Lukatsky.

They will be there for that defense, like so many brave Ukrainians. The courage they’re showing in the face of great force is the same courage they took into the ring, multiplied by a factor of 10.

Knowing them, it’s no surprise they’re willing to shed blood in defense of their country.

They're fighters, and they're in the fight of their lives.

Tim Dahlberg is a national sports columnist for The Associated Press who first began covering the Klitschko brothers in 2002. Write him at tdahlberg@ap.org or http://twitter.com/timdahlberg