An Ocala family discovered a collection of wrapped Christmas presents in the attic of their late grandfather. They also found an old Christmas card with money in it from their great-grandparents. (Credit: Holly Pomeroy)

A Central Florida family recently discovered some old wrapped Christmas presents from their late grandparents that they never received when they were kids!

Holly Pomeroy, of Ocala, posted several videos to TikTok of the presents she discovered in the attic of their grandfather. Pomeroy captioned the video: "My grandfather recently passed away and my cousin found super old wrapped Christmas presents in the attic to my dad, my sister and I. We also found an old Christmas card with money in it from my great-grandparents who passed around 2002."

This is wild! Mine say from Nana who passed in 2015. The rugrats wrapping paper makes me think these are way before then even. ##grandparents ##crazy

Pomeroy takes the box full of wrapped presents out one by one and can be heard saying, "These are probably from when we were kids."

The original video has racked up over 8 million views. 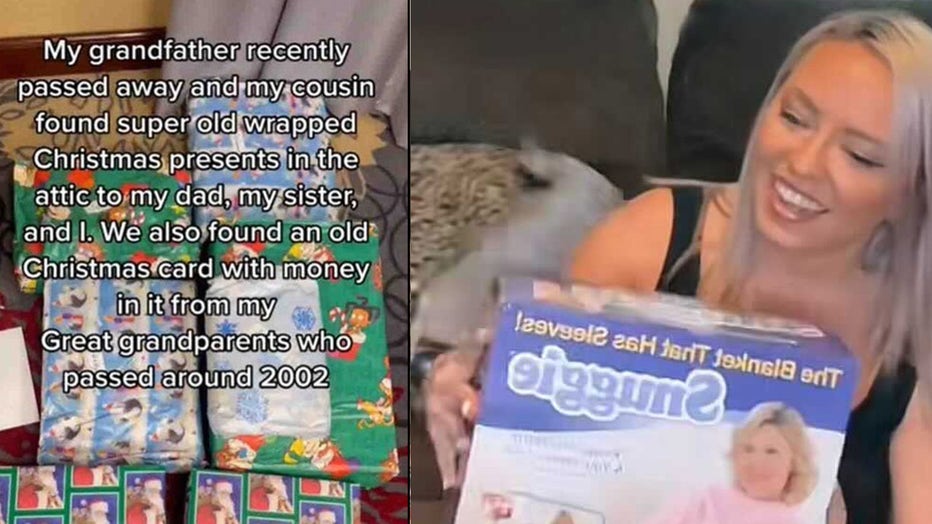 Pomeroy told FOX News in a message that her grandfather died on Nov. 16 and soon after, her cousin started going through his house the next week, around Thanksgiving. That's when they found the gifts, along with some Christmas cards containing cash from their great-grandparents who passed away in 2008.

Crazy this was just stored away for so long. I can’t wait to see what time period the gifts are from. ##crazy ##greatgrandparents ##lostchristmaspresent

Some of the gifts included a fleece robe, a Snuggie and a massage chair!

"It was definitely emotional opening them and knowing it was the very last thing I would ever receive from my grandparents," Pomeroy told FOX.

One commenter wrote: "Like an extra hug from them to keep you warm when they’re not here."

Pomeroy said she’s not exactly sure why the gifts had been forgotten about, or when exactly they were from. She did point out that one of the gifts was from her grandmother who died in 6 years ago.

Reply to @allisonannmiles this is so my grandpas humor though. 2 almost identical gifts but the most amazing thing I could have received from them❤️

"It’s possible that it was from Christmas of 2014 that we weren’t able to come down for," Pomeroy told FOX. "And then her health started really declining in January of 2015 and my grandpa probably just packed them away and forgot about them because of her death."

According to FOX, Pomeroy thinks the Christmas cards with money in them – which were signed by her great-grandparents – could be from as long ago as the 1990s, since the bills were from the 1995 series.

"We didn’t get to spend a whole lot of Christmases with my great-grandparents though, so could have just been forgotten as well," Pomeroy said. 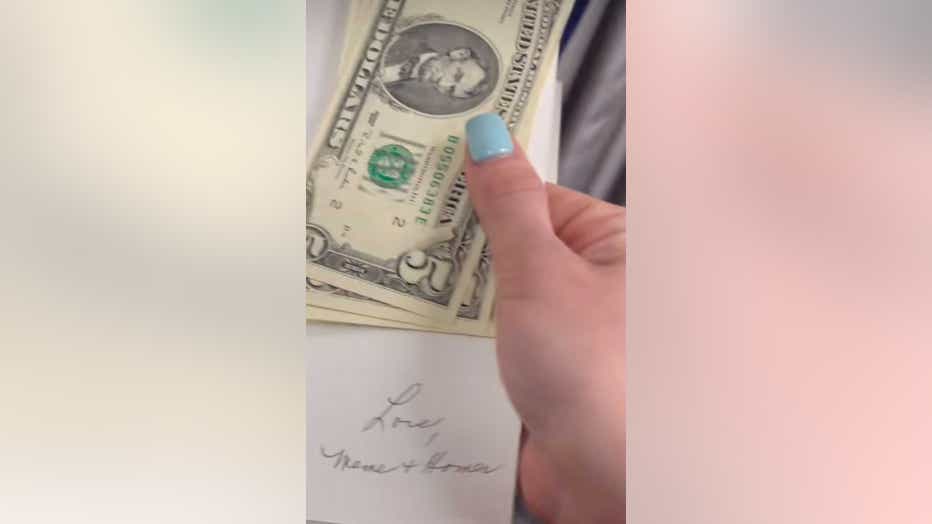 Despite not knowing why the gifts were in the attic for so long, Pomeroy tells FOX 35 it's been pretty exciting to find them.