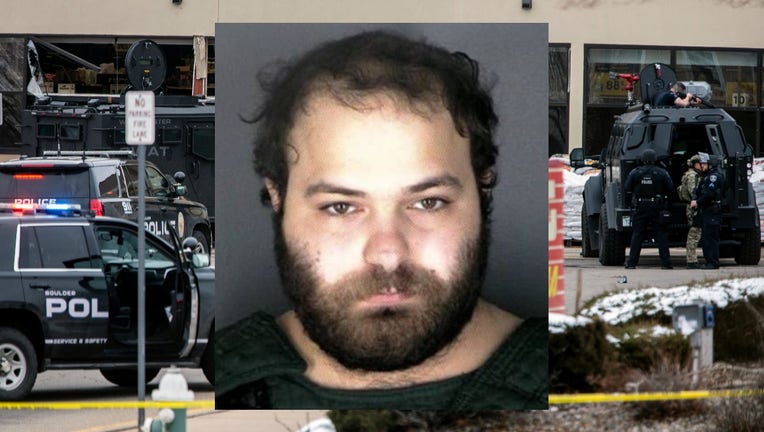 BOULDER, Colo. - More details are emerging the day after a 21-year-old identified as the alleged suspect killed 10 people, including a police officer, during a mass shooting at a Boulder, Colorado, grocery store this week.

The suspect allegedly bought the firearm used in the attack six days earlier, and was known by former classmates to be short-tempered and paranoid, according to reports and an arrest affidavit released Tuesday.

The document did not disclose where Ahmad Al Aliwi Alissa, from the Denver suburb of Arvada, bought the Ruger AR-556 but stated he did so on March 16. Just six days later, he allegedly shot multiple people outside the King Soopers on Table Mesa before entering the store and continuing the killing spree inside.

Alissa was booked into Boulder County Jail on Tuesday after receiving treatment for a gunshot wound. He has been charged with 10 counts of first-degree murder.

Police are still investigating the motive in the attack and said they are collecting statements from him. Officials did not provide much information about the suspect, but Boulder County District Attorney Michael Dougherty said Alissa had lived "most of his life in the United States."

Dougherty's office would not provide additional information when contacted by Fox News on Tuesday.

The affidavit also describes how one of Alissa’s relatives recalled seeing Alissa "playing with a gun she thought looked like a ‘machine gun’ about two days" prior to the attack.

The relative said she and other family members "were upset with Alissa for playing with the gun in the house and took the gun," and believed that by the time of her interview with police on Monday, the gun was back in Alissa’s room, according to the document.

On a Facebook page purported to belong to Alissa, he wrote messages that criticized former President Donald Trump's response to immigration and refugees, allegedly writing "Trump is such a d---." He also purportedly complained about not having a girlfriend and shared wrestling photos.

Speaking to the Denver Post, a former classmate, Dayton Marvel, said Alissa was "kind of scary to be around" and had once made threats against people during a wrestling match.

"His senior year, during the wrestle-offs to see who makes varsity, he actually lost his match and quit the team and yelled out in the wrestling room that he was like going to kill everybody," said Marvel, who reportedly graduated in Arvada West High School’s Class of 2018. "Nobody believed him. We were just all kind of freaked out by it, but nobody did anything about it."

Marvel also told the Post how Alissa "would talk about him being Muslim and how if anybody tried anything, he would file a hate crime and say they were making it up."

"I just know he was a pretty cool kid until something made him mad, and then whatever made him mad, he went over the edge -- way too far," Marvel continued, according to the report.

The Denver Post also cited an affidavit in describing how Alissa reportedly assaulted an Arvada West classmate in 2017, when he was 18, by punching him repeatedly, including in the head. According to the reported affidavit, the person Alissa was said to have attacked "had made fun of him and called him racial names weeks earlier."

"He was always talking about [how] people were looking at him and there was no one ever where he was pointing people out," Hernandez told the Post.

Hernandez added: "The sad thing about it is that if you really were to get to know him, he was a good guy … But you could tell there was a dark side in him. If he did get ticked off about something, within a split second, it was like if something takes over, like a demon. He’d just unleash all his anger," the newspaper reported.

Police first received a call around 2:40 p.m. local time Monday for a report of an active shooter at the supermarket on Table Mesa Drive. One of the callers described the shooter "as a White male, middle-aged with dark hair, a beard, a black vest and a short-sleeved shirt," according to the affidavit. Another caller claimed he was "wearing an armored vest and was about 5'8" tall, with a chubby build."

Witnesses also called to describe the shooter as having a black AR-15-style gun and blue jeans.

Multiple people described how the suspect shot at people inside and outside the store, including outside his vehicle.

The affidavit also said employees of the supermarket told investigators that the suspect allegedly shot an elderly man multiple times outside the store before going inside. Another person was found shot and in a vehicle next to a car registered to the suspect’s brother, the affidavit said.

Other people called to say they were hiding inside the grocery store as the suspect opened fire on customers.

"There were reports of ‘parties down’ from witnesses and a report that the male suspect shot at police," the affidavit continued.

The wounded police officer, Eric Talley, could not be saved. Talley. 51, was an 11-year veteran of the force and leaves behind seven children, including one as young as 5 years old.

Another officer who responded to the shooting discovered Talley, and then saw Alissa "with an assault rifle of an unknown make and brand, who was shooting toward him," the affidavit states.

By the time Alissa was in custody, he had been struck by a bullet that passed through his leg, the affidavit said. According to the document, police suspect he rid himself of his "gear" inside the King Soopers, leaving behind items including "a green tactical vest, a rifle (possible AR-15), a semiautomatic handgun, a pair of jeans and a dark-colored long-sleeved short."

Several video clips -- both on the ground and from aerial cameras -- showed a shirtless, bearded man being led out of the store in handcuffs, while he limped and appeared to be bleeding from one of his legs.

Police said Alissa did not answer officers’ questions when they first arrested him but did ask to speak to his mother.

Boulder Police Chief Maris Herold said Tuesday she did not believe Alissa was known to her department. Meanwhile, law enforcement officials told The New York Times his identity was known to the FBI because of his alleged connection to a different person whom the bureau was investigating.

Fox News' Louis Casiano contributed to this report, as well as The Associated Press.