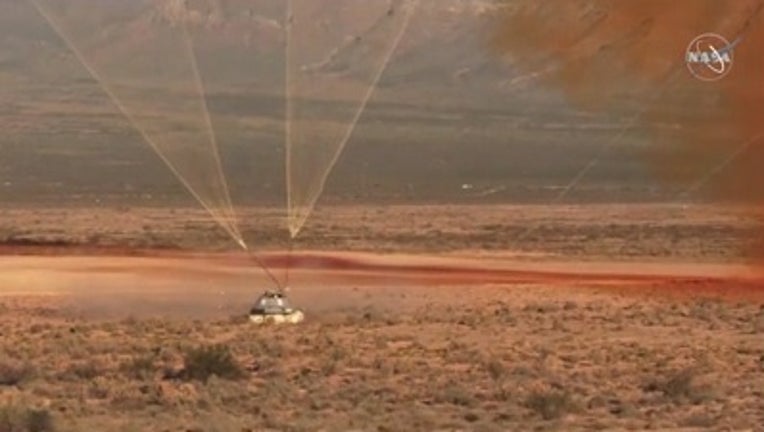 KENNEDY SPACE CENTER, Fla. - One of NASA‘s partners, contracted to build the next generation of space vehicles to take American astronauts to the International Space Station, tested its capsule’s critical abort hardware on Monday.

Under NASA guidelines, Boeing’s Starliner capsule needs to have the capability of separating from a rocket and landing in one piece, thereby saving the astronauts.

The capsule that could one day send astronauts back into space is undergoing extensive testing at Cape Canaveral. Boeing's Starliner is designed for land-based returns rather than water returns, a first for a space capsule built in the United States. The Starliner landing system includes parachutes as well as airbags, seen here, which are designed to absorb the shock of impact.

In New Mexico on Monday, the company launched the capsule about 4,000 feet into the sky.

Parachutes then deployed and it came sailing back down.

However, those who follow space closely noted that three parachutes were supposed to open. Only two did.

“And when we have people in there, we want everything to work perfectly,” said Dr. Ken Kremer.

Kremer runs the website SpaceUpClose.com. He says even though Boeing is downplaying the third parachute’s failure, he is concerned.

“You’ve got to remember, about 40 years ago, on Russian’s spacecraft, the parachutes tangled and the astronaut was killed because they didn’t deploy.”

Boeing isn’t the only company testing a capsule.

SpaceX has its Dragon Crew Capsule.

The vehicle malfunctioned during a test on the Cape in April. But this weekend, the company released photographs of successful parachute tests.

That speaks to the spirit of competition. It's the new space race.

“I think Boeing is a little bit ahead of SpaceX at this point,” Kremer said.

The next step for Boeing is to send the capsule unmanned to the International Space Station on December 17.

That will launch from Kennedy Space Center.

Crews are currently stacking the rocket it will ride on.

Despite the third parachute mishap, in a statement, Boeing calls the abort test “successful” and says it will review all of the data.