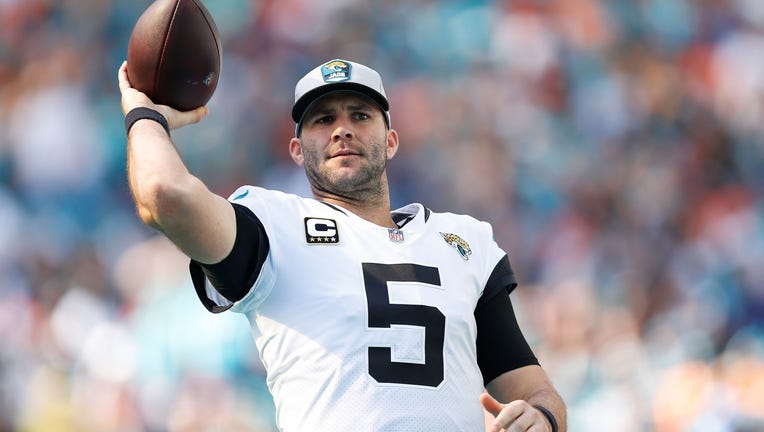 MIAMI, FLORIDA - DECEMBER 23: Blake Bortles #5 of the Jacksonville Jaguars warms up on the sideline in the first half against the Miami Dolphins at Hard Rock Stadium on December 23, 2018 in Miami, Florida. (Photo by Michael Reaves/Getty Images)

The Jacksonville Jaguars surprised the NFL in 2014 when the team selected quarterback Blake Bortles with the No. 3 overall pick, and eight years later, he has walked off into the sunset.

Bortles revealed to Barstool Sports’ "Pardon My Take" in a recent podcast episode that he has retired.

"I have not touched a football since January. I quietly, I didn’t tell anybody, I retired. I guess you guys are kind of the first to hear it publicly," he said.

"I’m pretty set with where I’m at in the decision … if somebody were dumb enough to offer that kind of money, then it’s kind of hard to pass on."

Bortles was the first quarterback taken off the board in 2014 – ahead of players like linebacker Khalil Mack, wide receivers Mike Evans and Odell Beckham Jr. and defensive tackle Aaron Donald.

Bortles led the Jaguars to the playoffs in 2017 and nearly got the team to the Super Bowl with the help of an incredible defense. He played for Jacksonville from 2014 to 2017. He recorded 17,646 passing yards and 103 touchdown passes.

He made three appearances for the Los Angeles Rams in 2019. He bounced from the Denver Broncos, Green Bay Packers and New Orleans Saints before coming to the decision to retire.