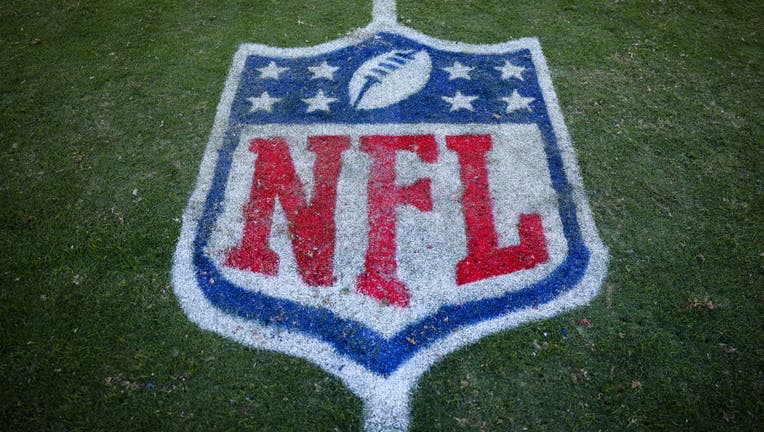 LANDOVER, MD - OCTOBER 09: A general view of an NFL logo on the field during the game between the Washington Commanders and the Tennessee Titans at FedExField on October 9, 2022 in Landover, Maryland. (Photo by Scott Taetsch/Getty Images)

The NFL will expand to Black Friday beginning next season.

The league announced Tuesday that Amazon Prime Video will stream a game on the day after Thanksgiving. The first Black Friday game will kick off at 3 p.m. ET on Nov. 24, 2023. The teams will be announced in May when the regular-season schedule is expected to be released.

Prime Video is in its first season as the exclusive carrier of "Thursday Night Football" and will expand to 16 games next season.

The package, which goes through the 2033 season, averages $1.2 billion per season, but Amazon will pay between $50 million and $70 million per year for the additional game.

NFL owners passed a resolution during the league meetings in March that gave the league permission to schedule another short turnaround game the week of Thanksgiving.

Marie Donoghue, Amazon’s vice president of global sports video, said discussions about a Black Friday game began while the original contract was being negotiated last year, but that it picked up more steam this year.

Donoghue said Amazon will treat the game like one of the biggest of the season.

"Given what that day already means to millions of Americans, and how many of them interact with Amazon and what a strong presence Amazon has. And also, the fact that there were no NFL games on that day, we thought we could treat it like a Super Bowl," she said.

The NFL has regularly played three games on Thanksgiving Day since 2006. The prime-time game was originally carried by NFL Network before NBC took it over in 2012. CBS and Fox alternate carrying the early game from Detroit and the late afternoon matchup from Dallas.

There were rumors this summer that the Black Friday game would be fast-tracked to this year, but the day is already packed with the World Cup and high-profile college football matchups.

The United States will face England in a World Cup group stage match on Fox at 2 p.m. ET. College football has long used Black Friday as a day to showcase rivalry games, and this year is no exception with Texas vs. Baylor, North Carolina vs. NC State, Missouri vs. Arkansas, Iowa vs. Nebraska and Florida State vs. Florida among the matchups.

"This year we were focused on the 15 Thursdays they already had. But now as we get here almost to the halfway point and see the great success out of the gate with Amazon, it felt like the right time to take the next step forward, and add to the partnership and expand onto Black Friday," said Hans Schroeder, the executive vice president of NFL Media.

According to Nielsen, Prime Video is averaging 10.8 million viewers through the first five games. The past two games have not been must-see TV as Indianapolis defeated Denver 12-9 in OT and Washington held on for a 12-7 victory over Chicago.

The game this Thursday will be a matchup of 2-4 teams when New Orleans visits Arizona. The Oct. 27 matchup features Lamar Jackson’s Baltimore Ravens and Tom Brady’s Tampa Bay Buccaneers.

The league has eight weeks set aside to cycle through byes, but all 32 teams are in action for Week 12 this season, which is the week of Thanksgiving.

The additional game also means there will be eight windows to fill with intriguing matchups while satisfying five broadcast partners. Schroeder said the league had the same case this year with Christmas week and that they will use that as a template for how to build the week of Thanksgiving.