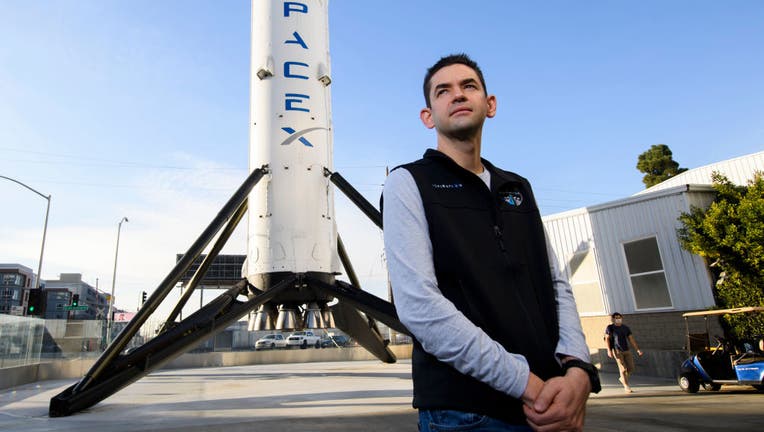 Inspiration4 mission commander Jared Isaacman, founder and chief executive officer of Shift4 Payments, stands for a portrait in front of the recovered first stage of a Falcon 9 rocket at Space Exploration Technologies Corp.

Isaacman, who turned a payments-processing firm he started as a teenager into a multibillion-dollar company, periodically indulges his passion for aviation with head-turning flights. Each time, a prominent charity has joined the ride — and the stakes keep getting bigger.

In 2009, Isaacman set a speed record for flying around the world in a light aircraft, raising tens of thousands of dollars for Make-a-Wish in the process.

Last September, he took both his flying and his philanthropy to a much higher level. Isaacman led the first all-civilian trip to space, accompanied by a physician assistant, a community-college professor, and a data engineer. Isaacman paid for and commanded the SpaceX flight, known as Inspiration4, and he vowed to donate even more than the cost of the flight to St. Jude Children’s Research Hospital.

Isaacman and his wife, Monica, personally donated $125 million to the hospital, and contributions by SpaceX founder Elon Musk ($55 million) and many others ultimately raised the total given to St. Jude to more than $243 million.

"You’re not fulfilling your purpose in life if you’re not maximizing the various opportunities that come your way," Isaacman says. "But it would be selfish to do that if you were not also trying to make the world a better place."

The Isaacmans’ giving earned them the No. 20 spot on the Philanthropy 50, the Chronicle of Philanthropy’s 22nd annual ranking of America’s biggest donors.

The payments-processing business Isaacman started in his parents’ basement had 100 employees when he was just 19. That same company, now known as Shift4, made him a billionaire when it was listed on the New York Stock Exchange in June 2020. Isaacman also founded Draken International, which operates the largest fleet of privately owned former military tactical jet aircraft in the world. Last year, the Isaacmans signed the Giving Pledge, committing to give the majority of their wealth to charity in their lifetimes.

Isaacman has always aspired to give back. Even when he was in his early 20s, he was making regular contributions to the Goodwill Rescue Mission, in Newark, not far from where he grew up in Westfield, New Jersey.

Isaacman says his urge to help stems from seeing families and children "living out of tires" during a family vacation to Cancun when he was young.

"Sometimes it’s just an unfortunate hand that you get dealt — I find that very, very unfair," Isaacman says. "My initial exposure was of people living in horrible circumstances. But there are other examples of that — such as getting a bad cancer diagnosis. So I want to support the treatment of that cancer, or, if that’s not possible, give children a memory through Make-a-Wish."

The contributions to St. Jude are unrestricted and will support work in a new 625,000-square-foot research facility, named the Inspiration4 Advanced Research Center. The funds will also go toward St. Jude’s six-year, $11.5 billion strategic plan to accelerate cancer research and treatment worldwide. Monica Isaacman’s family is originally from Chile, and she’s especially interested, according to Jared, in seeing St. Jude treatments get to other parts of the world.

"In the United States, overall survival rates for pediatric cancer have increased from around 20% when St. Jude opened in 1962 to more than 80% today," says Richard Shadyac Jr., president of Alsac, the fundraising and awareness organization for St. Jude. "And yet, in many developing countries, those survival rates still remain around 20%."

Isaacman made two other large donations in 2021. He gave $10 million to the National Naval Aviation Museum Foundation for a display honoring Dale Snodgrass, a celebrated former F-14 fighter pilot and close friend of Isaacman’s who died in a plane crash in Idaho last summer.

He gave another $10 million to the U.S. Space and Rocket Center Education Foundation, in Huntsville, Ala., which supports the educational program known as "Space Camp." More than 1 million children and adults have graduated from a Space Camp program since its inception in 1982 — including Jared Isaacman.

Isaacman first visited as a 12-year-old to participate in a program that focuses on simulated fighter-jet pilot training. The center was hard hit by the pandemic, and donations from University of Alabama football coach Nick Saban and Blue Origin, the spaceflight company owned by billionaire Jeff Bezos, helped keep it afloat. Isaacman’s gift will help pay for a new training center to provide simulated flights.

He and the rest of the Inspiration4 crew visited Space Camp this summer, and Isaacman spoke to kids going through the same type of program that he had experienced. "He told our students that he had been just like them, a young person with a dream that became a reality through hard work and a vision," says Kimberly Robinson, the center’s CEO.

Isaacman said he plans to remain focused in his philanthropy and that St. Jude and Space Camp will remain priorities going forward. Space Camp and the accompanying space and rocket center expose students to crucial STEM topics like robotics, artificial intelligence, and cybersecurity, Isaacman says.

"If you can get 100,000 kids per year through there and dramatically expand their footprint," he says, "it’s just going to make us a better, stronger nation."