President Joe Biden highlighted how the $1 trillion infrastructure law will benefit Great Lakes cleanup during an afternoon visit to Lorain, Ohio, on Feb. 17, 2022.

LORAINE, Ohio - President Joe Biden on Thursday traveled to Ohio to highlight how the bipartisan infrastructure law will dedicate $1 billion toward a long-delayed cleanup and restoration program for "areas of concern" along the Great Lakes.

Biden, who visited the northeastern Ohio city of Loraine on Lake Erie, announced how funding from the $1 trillion package will benefit the lakes — which hold about one-fifth of the world’s fresh surface water. Both the $1 billion boost and annual funding through an ongoing recovery program will help finish work on 22 sites designated 25 years ago as among the region's most degraded.

"We’re investing like never, ever in history," the president said.

The lakes provide drinking water for 40 million people and underpin the economy in eight Northeastern and Midwestern states and two Canadian provinces. They fueled a 20th-century industrial boom that generated wealth and jobs but caused ecological devastation.

Notorious images from the region including flames on the surface of the Cuyahoga River, which flows through Cleveland and into Lake Erie, helped inspire the enactment of the Clean Water Act and other signature environmental laws.

Biden noted how in 1987, the U.S. and Canada listed 43 sites along the Great Lakes — a majority of them in the U.S. and five sites shared by both countries — as "areas of concern." Many of these areas have been contaminated with industrial sediments that make the waters unsuitable for fishing, swimming and other uses.

"For decades, there was a lot of talk, a lot of plans, but very little progress," Biden said. "That changes today."

The Biden administration hopes to accelerate cleanup of sites across six U.S. states, spanning in places from Duluth, Minnesota to Buffalo, New York. Of 25 U.S. sites on the list, only three are expected to need further work by 2030, officials said. They include the St. Lawrence River in New York and Michigan's Kalamazoo River and Saginaw River and Bay. 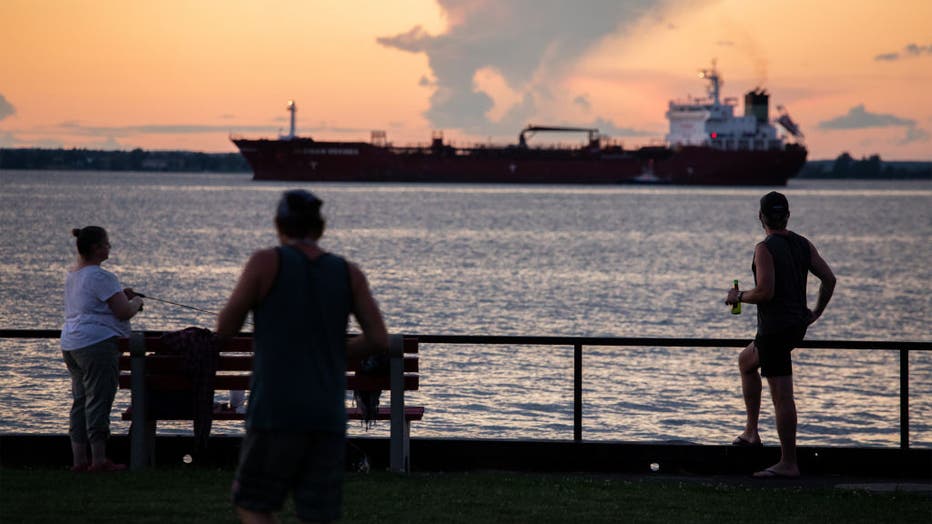 Other sites where work should be done prior to 2030 include Waukegan Habor, Illinois; the Grand Calumet River in Indiana; the St. Louis River in Minnesota and Wisconsin; the Black and Cuyahoga rivers and Maumee, Ohio; the Niagara and Buffalo rivers, Eighteenmile and the Rochester Embayment in New York; Wisconsin's Fox River, Milwaukee Estuary and Sheboygan; and Michigan's Muskegon Lake, River Raisin and Torch Lake along with the Clinton, Detroit, Manistique, Rouge, St. Clair and St. Marys rivers.

In the past, little funding came toward cleanup plans until the Obama administration kicked off the Great Lakes Restoration Initiative in 2010. Because of progress under the initiative, which has received nearly $4 billion, the Environmental Protection Agency has dropped six areas of concern from the list and finished work at 11 others. They'll also be removed after scientists determine they have recovered, depending on factors such as whether wildlife populations are thriving.

The more than 6,000 projects funded under the restoration initiative also deal with some of the lakes' other biggest problems. They include invasive species such as quagga mussels that unravel food chains; toxic algae blooms caused by agricultural runoff and sewage overflows; and loss of wetlands and other wildlife habitats.

Officials said the $1 billion boost from the infrastructure package will enable the EPA and other federal agencies to devote more resources to those issues from the program's core budget. Congress voted separately in 2021 to increase the initiative's annual funding from $300 million to $475 million over five years.

What's in Biden's signature infrastructure bill? Here's a look at the $1 trillion investment in the United States.

Collin O’Mara, president of the National Wildlife Federation, called the Great Lakes "North America’s most important source of freshwater" and applauded the news.

Meanwhile, critics say the program has shortchanged low-income, minority communities and its focus on fixing past damage ignores the need for tougher rules to prevent future harm.

"Why restore a lake while another degrades?" Michael Isham, executive director of the Great Lakes Indian Fish and Wildlife Commission, said during a recent workshop sponsored by the nonprofit Institute for Journalism and Natural Resources.

The EPA said it will distribute the $1 billion from the infrastructure measure in keeping with a Biden pledge to deliver at least 40% of benefits from crucial federal investments to "underserved communities."

Most of the infrastructure funds will be used for the hot spot cleanups, officials said during a news briefing ahead of Biden's Ohio trip.