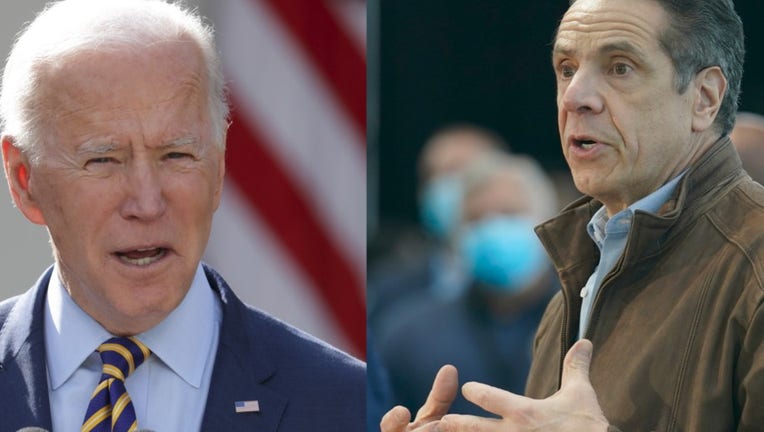 President Joe Biden broke his silence on Gov. Andrew Cuomo's mounting allegations of sexual misconduct on Sunday – but fell short of calling on the embattled New York Democrat to resign.

The president and longtime Cuomo acquaintance finally addressed the scandal in an unscheduled question-answer session from the White House South Lawn after several Democrats joined the growing chorus of lawmakers who have demanded the governor's resignation following the seventh allegation of sexual misconduct.

When asked whether he agreed with other Democrats calling for Cuomo's immediate resignation, Biden said plainly, "I think the investigation is underway and we should see what it brings us."

New York Sen. Kirsten Gillibrand said ‘it’s clear’ that Gov. Cuomo has lost the confidence of governing partners and people of New York, and that he ‘has to resign.’

With the exception of House Speaker Nancy Pelosi, D-Calif., Biden's wait-and-see approach is not a common sentiment within his own party. New York Democratic Sens. Kirsten Gillibrand and Chuck Schumer joined New York Democratic Reps. Alexandria Ocasio-Cortez and Jerry Nadler on Friday in calling for their state's governor to leave his position as allegations of inappropriate conduct continue to emerge.

Pelosi on Sunday reaffirmed that she has "zero tolerance" for sexual harassment – but refused to echo their calls for his resignation until an investigation is completed.

New York Attorney General Letitia James is investigating harassment allegations, and Cuomo has said he will "fully cooperate" with her probe, but expressed no plans to resign. A defiant Cuomo addressed the allegations during a press call on Friday afternoon, insisting that he "did not do what has been alleged."

Despite this, nearly 90% of New York's congressional delegation has called for the governor's resignation or impeachment, as have more than 80% of state senators. Last week, the state Assembly initiated what could be the first step toward impeachment by opening an investigation with full subpoena power into sexual misconduct allegations against the governor and his handling of COVID-19 at nursing homes.

RELATED: With Cuomo under fire, No. 2 Kathy Hochul treads carefully

Biden's weeks-long silence surrounding the scandal came under question over the weekend by former Cuomo aide and first accuser Lindsey Boylan, who called out the president and vice-president in a since-deleted tweet for refusing to publicly address the mounting allegations.

"The governor has denied all wrongdoing," Boylan wrote on Twitter. "He got on his platform today and said ‘there are many motivations of why people do things.’ He is calling up hate and speculation to be directed to his accusers. All harm and hate directed at the women sits squarely on @NYGovCuomo."

Boylan later added, "It also calls into question the judgment and courage of both @POTUS and @KamalaHarris." She later deleted the second tweet.

This is a developing story. Check back here for updates.