Biden asks Congress for another $33 billion in Ukraine aid

President Joe Biden asked Congress for an additional $33 billion to help Ukraine fend off Russia's invasion in remarks on April 28, 2022.

When Ukrainian President Volodymyr Zelenskyy autographed a baseball for an American collector in 2019, he likely had no idea it would one day be used to help his nation during a time of need.

The official Rawlings Major League baseball is being sold by Randy Kaplan, a renowned collector of balls signed by world leaders, with a portion of the proceeds going to war relief efforts in Ukraine, auctioneer RR Auction of Boston said Tuesday.

The ball was expected to sell for at least $15,000 but the leading bid as of Tuesday had already exceeded that amount, an RR spokesperson said.

"With what's going on in the world right now it makes sense to auction it at this point because the proceeds will help the people in Ukraine," Kaplan said in a telephone interview "What's going on in Ukraine is a disgrace and it's breaking my heart to see the people dying there. Their needs are just so dire right now."

The ball is signed with black felt tip both in Ukrainian Cyrillic and in Latin letters. It is accompanied by a transmittal letter signed by Volodymyr Yelchenko, Permanent Representative of Ukraine to the United Nations, which reads: "Dear Mr. Kaplan, Please find enclosed a baseball, signed by the President of Ukraine, H.E. Mr. Volodymyr Zelenskyy during the visit to New York in September 2019." 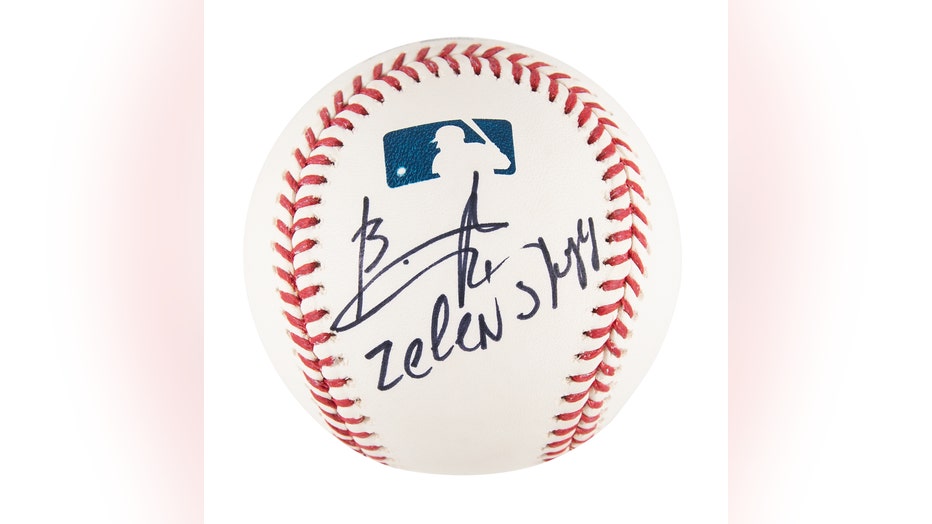 In addition to the unspecified percentage of the sale that will be donated through the global nonprofit Americares, RR Auction will contribute its buyer’s premium and seller’s commission to war relief efforts. Americares’ website describes its humanitarian response in Ukraine as focused on the medical needs of millions of refugees.

Kaplan is a governmental affairs specialist from New York who has many contacts with the U.N. and in U.S. politics. He doesn't buy his baseballs at auction, instead acquiring them himself through those contacts.

He started his collection in 1996 when former President Bill Clinton signed a baseball for him at a meeting in Washington, D.C. The collection, which now numbers more than 500 items, has been displayed at museums and presidential libraries around the country.

The auction that ends May 11 also includes autographs and artifacts from Johann Sebastian Bach, Nikola Tesla, and Albert Einstein.