Astronauts prepare for next crewed mission

The Crew-1 astronauts arrived in Florida to prepare for their mission, scheduled for next weekend.

NASA and SpaceX are targeting November 14th for the launch of the first crew rotation mission to the International Space Station. Liftoff is planned for 7:49 p.m. EST from Launch Complex 39A at NASA's Kennedy Space Center in Florida on Saturday, November 14th.

RELATED: Meet the astronauts going on the next crewed NASA, SpaceX mission

The crew arrived at Kennedy Space Center in Cape Canaveral on Sunday afternoon.

The astronauts arrived at Kennedy Space Center in Cape Canaveral on Sunday afternoon. They spoke, along with leaders at NASA and JAX, about the upcoming launch. It was described as a transitional launch, as the Kennedy Space Center becomes the base for routine launches to the International Space Station (ISS) and hopefully commercial flights.

Mike Hopkins was the first of the crew to speak and he said that "we’re ready. We spent the last couple of weeks fine-tuning our training. And we’ve also had the opportunity to spend a little time at home with our families. And we’re are truly honored to be apart of this transition.”

Victor Glover spoke next and said that "we have this great mission ahead of us and we all look forward to getting into orbit and make you really proud of us.”

Shannon Walker, who has never launched from Kennedy Space Center before, spoke third and said that "I’m just so happy to be here, in Florida, getting ready for this launch.”

Finally, JAXA's Soichi Noguchi went last and expressed that "We go to space with pride. Our name is Resilience. Resilience is power to recover, will to restore, and strive to survive.” 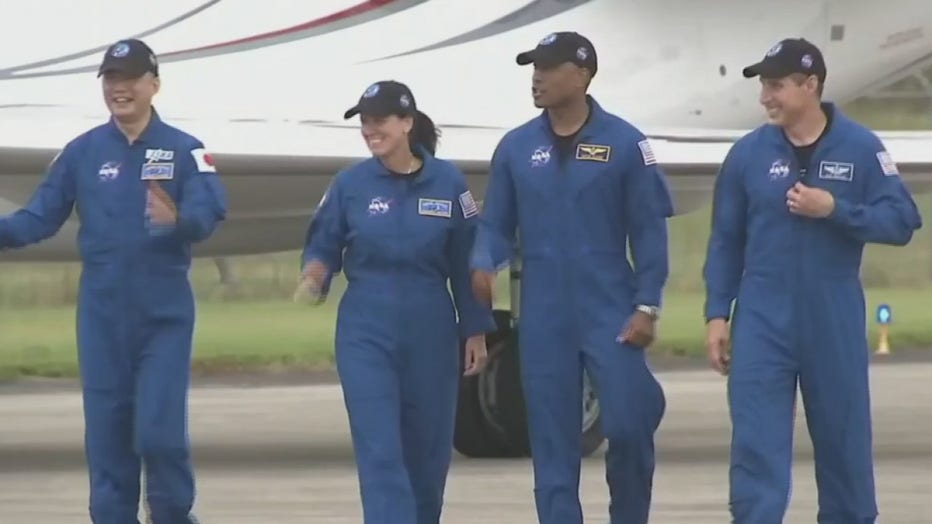 NASA's SpaceX Crew-1 mission will launch the four astronauts to the International Space Station (ISS), where they will join the Expedition 64 crew of Commander Sergey Ryzhikov, and Flight Engineers Sergey Kud-Sverchkov, and NASA astronaut Kate Rubins. This will increase the regular crew size of the space station’s expedition missions from six to seven astronauts, adding to the amount of crew time available for research.