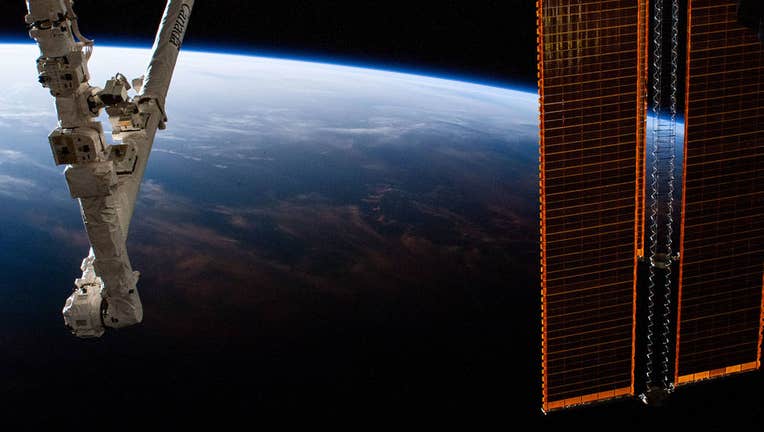 The space station orbits into a sunrise 257 miles above the Pacific Ocean.Photo via NASA's website.

A fleet of satellites that could all fit in the trunk of a car will launch ahead of peak hurricane season to help scientists better understand rapidly-changing tropical systems.

NASA's TROPICS mission stands for Time-Resolved Observations of Precipitation structure and storm Intensity with a Constellation of Smallsats, and the acronym is very literal.

Six CubeSats, the size of a loaf of bread, weighing about 10 pounds apiece, will rapidly fly over the tropical cyclone belt, taking microwave measurements that will provide details of storm structure, thermodynamics and precipitation throughout the lifecycle of a tropical system.

"We're trying to understand the fundamental processes of the storms, but the endgame is to improve the forecasting, use that understanding, to improve the modeling and the assimilation so that we can better forecast the track of the storm and the intensity of the storm," TROPICS Principal Investigator William Blackwell, with MIT Lincoln Laboratory, told FOX Weather.

The first pair of TROPICS CubeSats is scheduled to launch in June from Cape Canaveral Space Force Station on Astra's rocket. All six satellites were built by Blue Canyon Technologies in Boulder, Colorado and are currently being prepared now to ship to the Florida launch site.

The mission is research-focused as the team will be trying to answer fundamental physics questions behind a storm.

While the NASA requirement doesn't call for help with day-to-day forecasting, Blackwell said interest in the mission quickly grew from forecasters who saw the benefits. The TROPICS team is now going above and beyond to turn around that data to NOAA within an hour. Previously, the timeline put the data to NOAA within 6 to 12 hours.

"We've been trying to work on and improve the mission so that we can get data into the hands of our NOAA partners as quickly as possible," Blackwell said.

A TROPICS pathfinder, or demonstration mission, launched last year on a ride-sharing mission with SpaceX and performed incredibly well. In April, Blackwell said an NOAA-funded test showed that the satellite could achieve download times under 1 hour.

"We've gotten fantastic imagery of tropical cyclones with better structural resolution than we've ever seen before," Blackwell said. "We have a new channel that measures at 205 gigahertz that provides a lot of new information on the structure near and around the eye and the rain bands. It responds very well to the ice and the cloud tops, so we get very nice images from that channel."

The hope is that by using the KSAT Global Ground Station Network, every time a TROPICS satellite flies over one of the ground stations worldwide, data will downlink, which gets sent to forecast offices.

WHAT A TOXIC INFERNO LIKE VENUS CAN TELL US ABOUT EARTH

Blackwell explained that TROPICS would eventually improve forecasts, which will help emergency managers know when to begin telling people to prepare.

"All very important, obviously, for disaster management and managing the emergency situations that always arise when you have a hurricane barreling down on the coast of the U.S.," Blackwell said. "We want to be able to prepare the people, warn them to get out of the way and cut down on the false alarms. Right? So we don't have the de-sensitivity to the warnings."

Even though the payloads are tiny, it was essential for the mission to get a dedicated launch vehicle instead of ride-sharing. NASA's Launch Services Program selected Astra to get all six TROPICS spacecraft to orbit over three launches.

"We have very specific orbital requirements so that these six CubeSats will be in orbits that are inclined by 30 degrees to the equator, and that puts the satellites right over the tropical cyclone belt," Blackwell said.

NOAA satellites currently in orbit are mostly polar-orbiting, or sun-synchronous, putting only a fraction of their orbits over the tropical cyclone belt.

After launch, Astra will send each pair of satellites in opposite directions.

The tiny satellites have a lot going on to function in orbit. The MIT Lincoln Laboratory video above shows the final constellation in orbit.

At the end of the satellite, the payload, a microwave radiometer developed by MIT Lincoln Laboratory, will turn 30 times a minute, scanning the Earth to take measurements. A solar array will provide power, turning to track the sun as the satellite orbits the Earth, and the satellite is rolling as well to stay facing the sun.

"So we have all this motion on the satellite, and we have to GEO locate the pointing of the payload when all that is happening, so we know where we're pointed," Blackwell said.