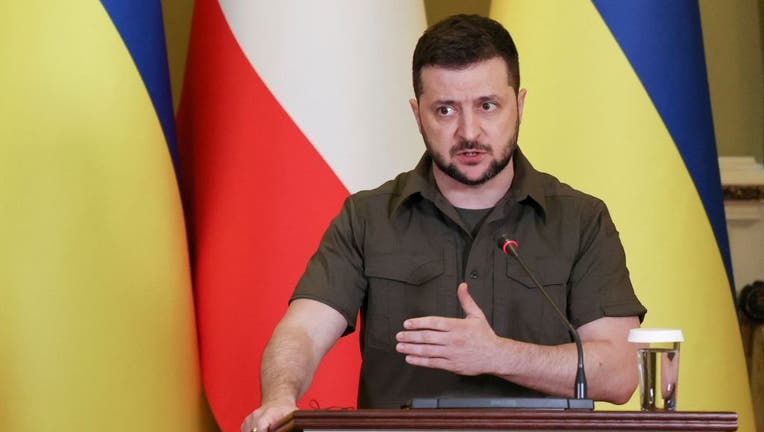 "To continue heroically defending the world from Russian aggression, Ukraine needs a specific list of weapons," he posted on Telegram. "I appeal to citizens of the whole world to help convey to your governments, presidential administrations, and leaders of your countries the real needs of Ukraine, which will help stop the war."

"We are asking the whole world to unite and help us fight this cruel aggression," he continued.

Russia invaded Ukraine on Feb. 24 with the goal, according to Western officials, of taking the capital, Kyiv, toppling the government and installing a Moscow-friendly one. But the ground advance slowly stalled and Russia lost potentially thousands of fighters in seven weeks of war. The conflict has killed untold numbers of Ukrainian civilians and forced millions more to flee. The fighting has also rattled the world economy, threatened global food supplies and shattered Europe’s post-Cold War balance.

Meanwhile, a day after he called Russia’s actions in Ukraine "a genocide," President Joe Biden approved $800 million in new military assistance to Ukraine, saying weapons from the west have sustained Ukraine’s fight so far and "we cannot rest now." The weapons include artillery systems, armored personnel carriers and helicopters.

Following those setbacks, Russian troops are now gearing up for a major offensive in the eastern Donbas region, where Moscow-allied separatists and Ukrainian forces have been fighting since 2014, and where Russia has recognized the separatists’ claims of independence. Military strategists say Moscow believes local support, logistics and the terrain in the region favor its larger, better-armed military, potentially allowing Russia to finally turn the tide in its favor.

A key piece of the Russian campaign is Mariupol, which lies in the Donbas and which the Russians have pummeled since nearly the start of the war. Ukrainian presidential adviser Mykhailo Podoliak tweeted that the city’s defenders were short of supplies but were "fighting under the bombs for each meter of the city."