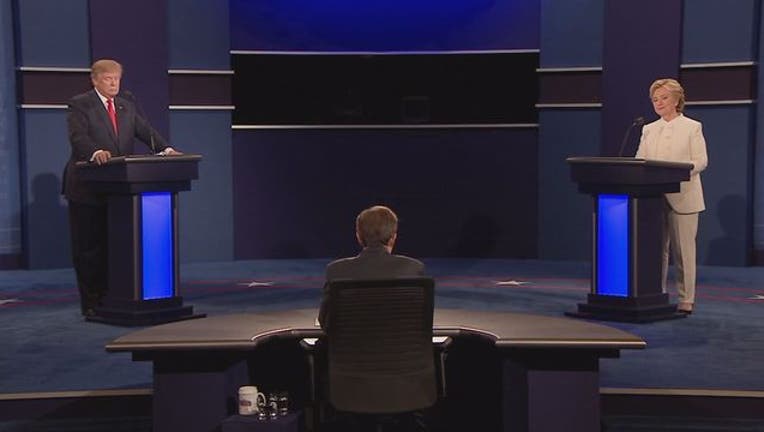 WASHINGTON (AP) — Donald Trump painted an inaccurately dark portrait of manufacturing in America while Hillary Clinton stretched credulity in boasting that her spending plans won't add to the country's debt. As well, both struggled in the presidential final debate to explain comments from their past.

A look at some of the claims in the debate and how they compare with the facts:

THE FACTS: Despite his "relatively speaking" hedge, the assertion is wrong. U.S. factory production has more than doubled since 1979, when manufacturing employment was at its peak.

The problem is that it takes fewer people to produce more. The United States has lost more than 7 million factory jobs, a drop of nearly 40 percent, since the 1979 manufacturing employment peak.

Factory production, minus the cost of raw materials and certain other expenses, reached $1.91 trillion last year, according to the Commerce Department, which uses 2009 dollars to adjust for inflation. That's a notch below the record set on the eve of the Great Recession in 2007. Factories have used robotics and computers to increase output even with fewer workers. The U.S. still produces plenty of autos, planes, steel and other metals, and large industrial machinery.

CLINTON: "I don't add a penny to the national debt."

THE FACTS: Not true, according to the nonpartisan Committee for a Responsible Federal Budget. It estimates her increased spending in areas such as infrastructure, more financial aid for college and early childhood education, would increase the national debt by $200 billion over 10 years. That is far less than their estimate for Trump, who they predict would add $5.3 trillion over 10 years. But it's plenty more than a penny.

TRUMP, referring to a 2010 U.S.-Russia treaty limiting both countries to 1,550 strategic nuclear warheads: "They create warheads. We can't."

The FACTS: Incorrect. The New START treaty, which Trump called "Start Up," does not prevent either the U.S. or Russia from building nuclear warheads. It restricts each country to a total of 1,550 warheads deployed on bombers, submarines and in underground silos and requires that this limit be reached by February 2018.

CLINTON, on Trump's charge that she called for open borders in a 2013 speech to a Brazilian bank: "I was talking about energy."

THE FACTS: She was actually talking about more than energy, but apparently less than an open border that immigrants can spill across at will, according to the partial transcript released by WikiLeaks.

Clinton said in the speech that "my dream is a hemispheric common market, with open trade and open borders, sometime in the future with energy that is as green as sustainable as we can get it, powering growth and opportunity for every person in the hemisphere." The remarks suggest a broad interest in open trade but were not necessarily evidence that she would support the unfettered movement of people, as Trump charged.

CLINTON: "He held a number of big rallies where he said that he could not possibly have done those things to those women because they were not attractive enough."

THE FACTS: He did say that. At an Oct. 13 rally, Trump criticized the physical attractiveness of People magazine reporter Natasha Stoynoff, who has said Trump forced himself on her at Mar-a-Lago while she was interviewing him for a story. Trump said: "Take a look. You take a look. Look at her, look at her words, you tell me what you think. I don't think so."

THE FACTS: Clinton might aspire to that lofty goal, but she has only proposed making college tuition free for in-state students who go to a public college or university. Even with expanded grant aid, room and board can lead students to borrow.

Clinton would have the government pay for in-state tuition at public colleges and universities for students from families earning less than $125,000 a year. Students would still need to foot the bill for housing and food, which makes up more than half of the average $18,943 sticker price at a four-year public university, according to the College Board.

But Trump is correct that government would shoulder higher costs with Clinton's plan.

Her plan would cost the federal government an estimated $500 billion over 10 years, with additional costs possibly for state governments.

TRUMP: "Her plan is going to raise taxes and even double your taxes."

THE FACTS: Clinton's plan wouldn't raise taxes at all for 95 percent of Americans, according to the nonpartisan Tax Policy Center. The very wealthiest would take the greatest hit, though a doubling is highly questionable.

Two-thirds of her proposed increases would hit the top 0.1 percent of richest Americans, the center estimates. The main components of her tax plan: a minimum 30 percent tax on those earning at least $1 million a year, and a 5 percent tax surcharge for those earning more than $5 million a year. She would also cap the value of tax deductions and exclusions for wealthier taxpayers.

CLINTON on her opposition to the Trans-Pacific Partnership trade deal: "It didn't meet my test."

THE FACTS: It met her test when she was secretary of state and she promoted it worldwide.

Hacked emails from Clinton's campaign, released Wednesday by WikiLeaks, showed that Jake Sullivan, her top foreign policy adviser, called her a "big champion" of the deal and worried about how to handle the issue in the face of Sen. Bernie Sanders' opposition. She later flip-flopped into opposition during the Democratic primaries against Sanders.

Clinton says she no longer backs the proposed trade deal as written because it does not provide enough protections for U.S. workers on wages, jobs and the country's national security. Yet the final deal also includes some of the strongest labor protections of any U.S. trade agreement.

TRUMP: "Hillary Clinton wanted the (border) wall. Hillary Clinton fought for the wall in 2006 or thereabouts. Now, she never gets anything done, so naturally it wasn't built."

THE FACTS: He's partly right. As a senator from New York, Clinton did support the 2006 Secure Fence Act, which authorized the construction of hundreds of miles of fencing along the U.S.-Mexico border.

But it was built, contrary to Trump's assertion. Nearly 700 miles of fencing was put in place during President George W. Bush's second term and the beginning of President Barack Obama's first term.

The fencing is placed largely in urban areas along the nearly 2,000-mile frontier. It is not the type of solid wall that Trump has pledged to construct at Mexico's expense. The fence has miles-long gaps and gates built in to allow landowners access to their property on the south side of the fencing. Immigrants have been known to go over and around the fence.

TRUMP: "So I just left some high representatives of India. They're growing at 8 percent. China is growing at 7 percent. And that for them is a catastrophically low number. We are growing, our last report came out and it's right around the 1 percent level and I think it's going down."

THE FACTS: China and India are growing faster in large part because they're playing catch-up to the United States, the world's largest economy. Those two Asian countries are starting from a much lower baseline with a much larger population than the United States, meaning that by definition they should be growing faster. Economists would warn of a dangerous bubble if the United States grew that quickly and financial markets would fear a devastating recession to follow.

But China and India aren't any better off than the U.S., said former Federal Reserve Chairman Ben Bernanke in an analysis released Wednesday. On a per-capita basis, China has just 10 percent of the United States' income. India has about 6 percent.

Factoring in life expectancy, inequality and leisure, Bernanke notes that the United States comes off even better.

TRUMP: "Last week, as you know, the end of last week, they came out with an anemic jobs report. A terrible jobs report."

THE FACTS: The September jobs report that Trump calls "terrible" is actually viewed by most economists as encouraging. Employers added 156,000 jobs last month and the unemployment rate ticked up to 5 percent because more Americans felt confident enough to start looking for jobs, a positive sign.

THE FACTS: Not quite. That figure is a distortion about a legitimate record-keeping concern. In 2014, the State Department's inspector general released an alert warning that the documentation for $6 billion in State Department contracts was incomplete. But there's no reason to think that all occurred under Clinton. The inspector general, Steve Linnick, specifically disavowed the conclusion that the money went missing.

THE FACTS: That's true. Obama has overseen the deportation of more than 2.5 million immigrants since taking office in January 2009.

During Obama's first term hundreds of thousands of immigrants were deported annually, following a trend of increasing deportations started under President George W. Bush. The administration set a record in 2014 when more than 409,000 people were sent home. During his second term, deportations have steadily declined as he has opted to focus immigration enforcement on deporting serious criminals and those who pose a threat to national security or public safety.

Trump also claims that "nobody knows about it, nobody talks about it" and that's not so. Obama has been dubbed "the deporter in chief" by immigration advocates and opponents of his immigration enforcement policies.

TRUMP: Clinton "has no idea whether it's Russia, China or anybody else" behind recent hacks of Democratic organizations and individuals. "Our country has no idea."

THE FACTS: Trump's refusal to point the finger at Moscow is at odds with the prevailing position of the U.S. intelligence community. "We believe, based on the scope and sensitivity of these efforts, that only Russia's senior-most officials could have authorized these activities," the Office of the Director of National Intelligence said recently in a joint statement with the Department of Homeland Security.

Russia has denied accusations that it was behind the effort.