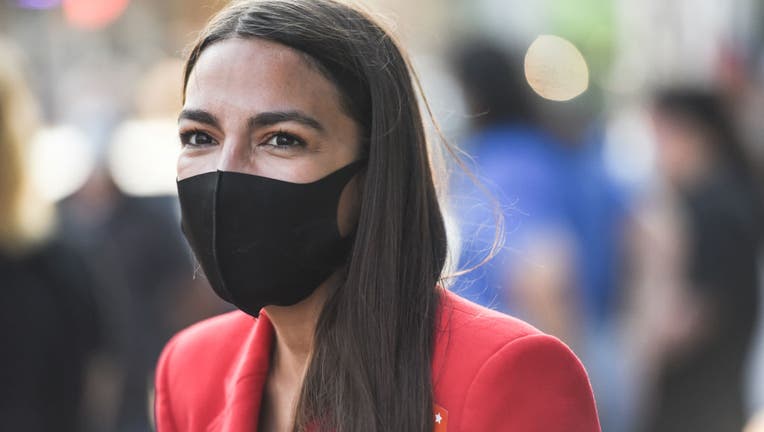 WASHINGTON - Rep. Alexandria Ocasio-Cortez on Thursday reiterated her push for President Biden to unilaterally cancel billions of dollars in student loan debt, warning that whether or not the White House does so "all comes down to public pressure."

The New York Democrat said progressives need to keep pressing the Biden administration to move further left on the matter after the president indicated he was "unlikely" to use his authority to fully forgive student loan debt for individual borrowers.

"The Biden admin NEEDS to be pushed," Ocasio-Cortez wrote during an Instagram Q&A on Tuesday night. "They have said they're comfortable with $10K in forgiveness but we NEED at least $50K minimum and there is support for 50K."

Biden has called for forgiving $10,000 in student loan debt as part of a broader coronavirus relief effort, and extended a freeze on student loan payments through Sept. 30, 2021 immediately upon entering office, benefiting about 41 million Americans — but Ocasio-Cortez said the president needs to go further.

"We cannot take no for an answer," she said. "This will all come down to public pressure. We have a window to ORGANIZE and rally for your public officials to demand forgiveness."

The lawmakers maintained that Biden could use existing executive authority under the Higher Education Act to order the Department of Education to "modify, compromise, waive or release" student loans.

MORE NEWS: Who is eligible for a third stimulus check under the latest COVID-19 relief proposal?

"Canceling student loan debt is the single most effective executive action that President Biden can take to kickstart this economy," Warren said.

Still, canceling student loan debt may disproportionately benefit wealthy Americans: A recent working paper published by the University of Chicago’s Becker Friedman Institute for Economics shows that erasing all student loan debt would distribute $192 billion to the top 20% of earners in the U.S., but just $29 billion to the bottom 20% of U.S. households.

Such sweeping executive action by Biden would almost certainly face a legal challenge, and it's unclear whether it could survive. Critics have argued that using such power exceeds the president's authority granted by Congress.

Erasing student loan debt would also add to the nation's already-ballooning national deficit, which totaled a record $3.1 trillion for the 2020 fiscal year -- not including the $900 billion coronavirus relief legislation that lawmakers approved in December.

Outstanding student loan debt has doubled over the past decade, nearing a staggering $1.7 trillion. About one in six American adults owes money on federal student loan debt, which is the largest amount of non-mortgage debt in the U.S.

It has been cited as a major hindrance in people’s "economic life" by Federal Reserve Chairman Jerome Powell.