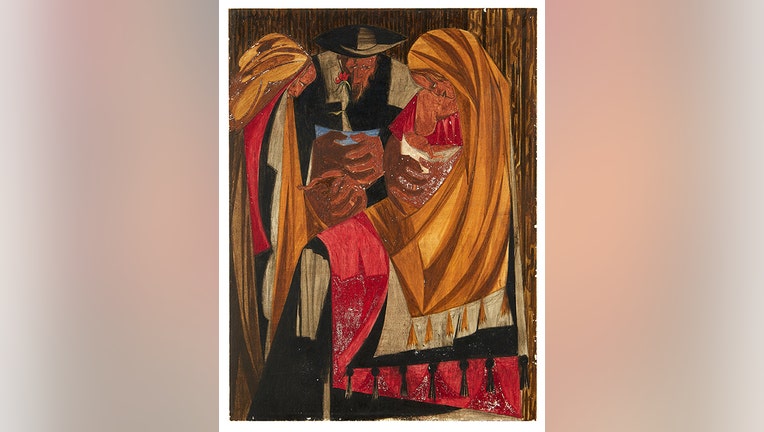 A second panel from American artist Jacob Lawrence's sweeping series "Struggle: From the History of the American People" that has been hidden from public view for decades has been located, the Peabody Essex Museum in Massachusetts announced Tuesday.

Officially entitled Immigrants admitted from all countries: 1820 to 1840 — 115,773, the painting known as panel 28 had not been seen in public since 1960 and was known only through a black-and-white reproduction.

"We are thrilled to share news of this important discovery, especially at a time when Americans are actively engaged with democracy," Lydia Gordon, the museum's associate curator said in a statement. The Salem-based Peabody Essex Museum organized the exhibit.

The painting will now join nearly 30 of the Black artist's other works painted in the 1950s for the last two stops of a national tour in Seattle and Washington, D.C., museum officials said. The 30-piece series remains incomplete, as the whereabouts of three panels remain a mystery, the museum said.

The 12-inch-by-16-inch (30.5-centimeter-by-40.5-centimeter) panel was found in a New York City apartment, like another painting in the series, panel 16, that was rediscovered in a different home in October. The owner, who wants to remain anonymous, inherited panel 28 from family, who — like the figures depicted — were immigrants.

The egg tempera on hardboard piece in vivid reds and yellows depicts two women in shawls clutching babies, one of them nursing, as well as a man wearing a wide-brimmed hat and holding a flower pot containing a single red rose, America's national flower. The subjects have oversized hands, symbolizing what it meant to arrive only with what could be carried, the museum said.

It was inspired by a table of immigration statistics published in Richard B. Morris's Encyclopedia of American History.

"Lawrence created this body of work during the modern civil rights era to interpret pivotal moments in the American Revolution and early decades of the republic as ongoing struggles," Gordon said.

The panel has undergone some restoration work and will join the exhibit, "Struggle: From the History of the American People," starting Friday at the Seattle Art Museum through May 23, and then at The Phillips Collection in Washington, D.C. from June 26 until Sept. 19.

It is the first time in more than 60 years the pieces are being shown together.

Museum officials hope that the discovery of panels 28 and 16 — which depicts Shays' Rebellion, the 1786–87 tax revolt in western Massachusetts, leads to the discovery of the three panels that remain missing.

The whereabouts of three more panels — Panel 14, Panel 20, and Panel 29 — are unknown. The museums involved in the national tour hope the attention to this exhibition will prompt someone to come forward to "help fully reunite this historic painting series for the first time since 1960," the Peabody Essex Museum said in its news release. Any tips or information about the missing panels can be sent to missingpanels@pem.org.

"We are thrilled to share news of this important discovery, especially at a time when Americans are actively engaged with democracy. Lawrence created this body of work during the modern civil rights era to interpret pivotal moments in the American Revolution and early decades of the republic as ongoing struggles. Against the backdrop of the recent attack on the Capitol coupled with the welcoming of a new Presidential administration, Lawrence's work encourages us to look to history and to art so we may understand America as a cyclical project of struggle and hope." —LYDIA GORDON, coordinating curator, Jacob Lawrence: The American Struggle; associate curator, Peabody Essex Museum

Panel 28 will join the final two stops of the national exhibition tour:

This is an excerpt from the Peabody Essex Museum description.

Jacob Lawrence: The American Struggle is the first museum exhibition of the series of paintings Struggle: From the History of the American People (1954–56) by the best known Black American artist of the 20th century, Jacob Lawrence (1917–2000). Created during the modern civil rights era, Lawrence’s thirty intimate panels interpret pivotal moments in the American Revolution and the early decades of the republic between 1770 and 1817 and, as he wrote, "depict the struggles of a people to create a nation and their attempt to build a democracy."

Reunited for the first time in more than sixty years, the Struggle paintings revive Lawrence's way of reimagining American history as shared history. Utilizing historical fact to underscore universal values, he created a broader narrative of U.S. history by pairing image and text, quoting a range of voices and rendering figures from prominent Founding Fathers to underrepresented historical actors. The exhibition, organized by PEM, tours nationally through 2021.