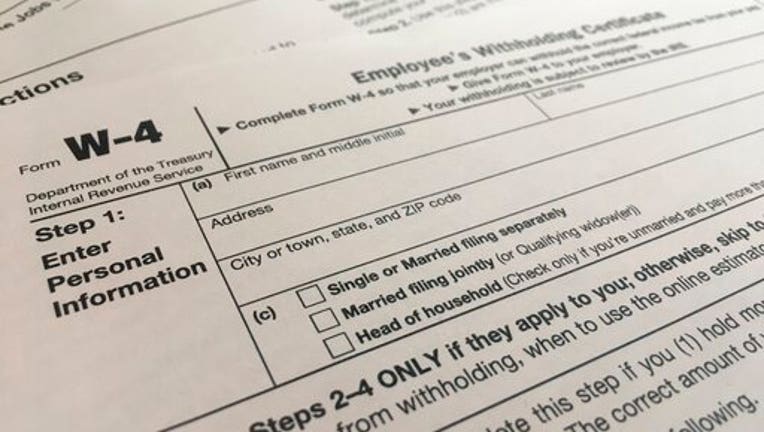 FILE - This Wednesday, Feb. 5, 2020 photo shows the W-4 form in New York. The majority of individual taxpayers in the U.S. are eligible to file their taxes for free, yet many may be unaware or confused by how to do so. Improvements have been made and

The IRS urged Americans to file their taxes electronically this year as the agency deals with a backlog of nearly 7 million unprocessed paper returns from last year.

On Friday, the IRS announced that it was delaying the start of the 2021 tax season, which usually begins at the end of January, to Feb. 12 to prevent further backlogs.

"If filing season were opened without the correct programming in place, then there could be a delay in issuing refunds to taxpayers," the IRS said in a news release.

The IRS received about 16 million paper returns last year; as of Dec. 25, the agency said it still had about 6.9 million individuals returns in the "processing pipeline" — or about 40%.

MORE NEWS: Bucs one win away from Super Bowl in Tampa

The delay means that people who claim Earned Income Tax Credit or Additional Child Tax Credit won't receive their refunds until the beginning of March, so long as they file electronically with direct deposits and there are no issues with their tax returns, the IRS said.

The agency said it expects nine out of 10 taxpayers to receive their refund within 21 days of filing electronically.

"Given the pandemic, this is one of the nation’s most important filing seasons ever," IRS Commissioner Charles Rettig said in a statement. "This start date will ensure that people get their needed tax refunds quickly while also making sure they receive any remaining stimulus payments they are eligible for as quickly as possible."

MORE NEWS: What time is the inauguration? Answers to your questions about Inauguration Day 2021

Like it charges interest when taxpayers don’t pay on time, the IRS also pays interest to taxpayers when the government issues refunds too slowly. The decision stems from a quirk in the tax code and in the way the filing deadline was extended, according to The Wall Street Journal.

In March, the Treasury Department extended the tax filing deadline from April 15 to July 15 as a result of the virus-induced pandemic, which dragged the nation's economy into the worst downturn since the Great Depression. During that time, the agency continued to process electronic returns and issued refunds via direct deposits.

But when the IRS directed most of its employees to work remotely in mid-March, bringing a host of the agency's typical functions to a grinding halt, it created a tremendous backlog in paper returns. At one point, the overflow was so great that the IRS had to rent tractor-trailers and separate storage space to store the documents until workers could return and start sorting through them, Nina Oldson, the director of the Center for Taxpayer Rights, told NPR.

The problem was further exacerbated by the task of delivering two stimulus checks to tens of millions of Americans. Americans who have not yet received the payments and are entitled to the money will have to claim a Recovery Rebate Credit on their 2020 tax return.

The IRS on Friday opened up Free File, free online tax preparation software, for taxpayers to prepare and file their income tax returns. The tool is available to anyone who earned $72,000 or less in 2020.