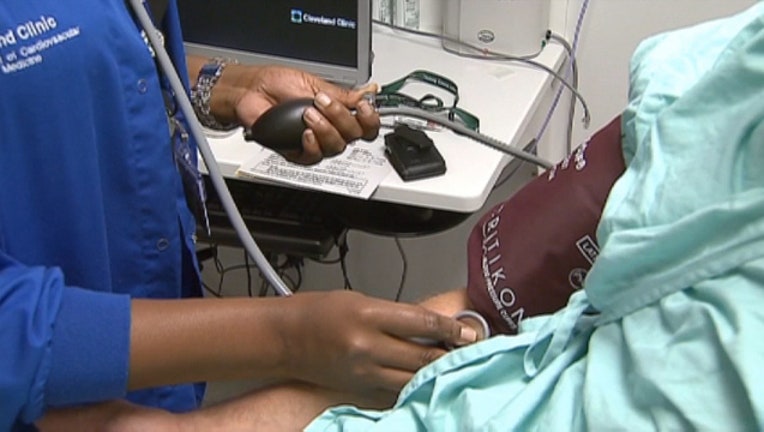 High pressure, which for decades has been a top reading of at least 140 or a bottom one of 90, drops to 130 over 80 in advice announced Monday by a dozen medical groups, including the American Heart Association and American College of Cardiology.

"That now means 30 million Americans will be labeled with hypertension, because of these new guidelines," said Dr. Jamin Brahmbhatt.

The change means an additional 14 percent of U.S. adults have the problem, but only an additional 2 percent will need medication right away; the rest should try healthier lifestyles, which get much stronger emphasis in the new advice. Poor diets, lack of exercise and other bad habits cause 90 percent of high blood pressure.

WHAT THE CHANGES MEAN

The guidelines set new categories and get rid of "prehypertension":

That means 46 percent of U.S. adults have high pressure (stages 1 or 2) versus 32 percent under the old levels.

How common it is will roughly triple in men under 45, to 30 percent, and double in women of that age, to 19 percent.

For people over 65, the guidelines undo a controversial tweak made three years ago to relax standards and not start medicines unless the top number was over 150. Now, everyone that old should be treated if the top number is over 130 unless they're too frail or have conditions that make it unwise.

Certain groups, such as those with diabetes, should be treated if their top number is over 130, the guidelines say. For the rest, whether to start medication will no longer be based just on the blood pressure numbers. The decision also should consider the overall risk of having a heart problem or stroke in the next 10 years, including factors such as age, gender and cholesterol, using a simple formula to estimate those odds.

Those without a high risk will be advised to improve their lifestyles — lose weight, eat healthy, exercise more, limit alcohol, avoid smoking.