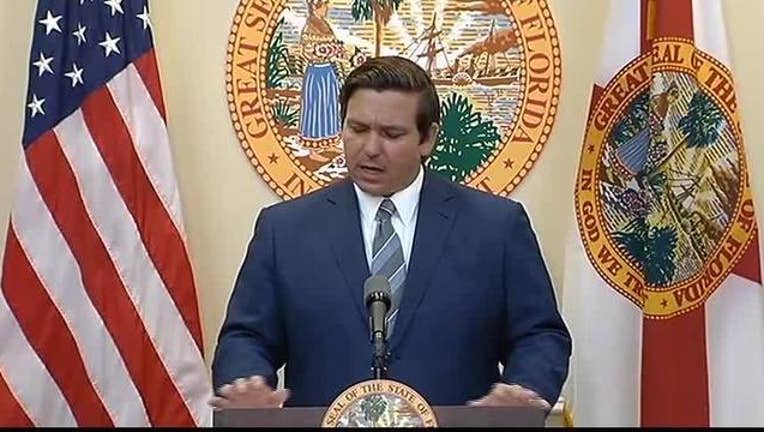 TALLAHASSEE, Fla. (NSF) - Gov. Ron DeSantis said Tuesday an inspector-general investigation must be completed before he and Florida Cabinet members could take action on the state’s embattled top financial regulator, who faces a sexual-harassment accusation.

“Obviously, if action needs to be taken, we will take it swiftly,” DeSantis said after a Cabinet meeting. “This process is going on, and I think it’s best for us to get the facts.”

The issue of suspended Office of Financial Regulation Commissioner Ronald Rubin and his office did not come up during the Cabinet meeting.

After the meeting, state Chief Financial Officer Jimmy Patronis, who released information about the investigation last month, continued to call for Rubin’s resignation --- something Rubin’s attorneys have said will not happen.

Patronis, who initially championed Rubin for the financial-regulator job, also said the investigation must be completed before action is taken, while implying that Rubin will be replaced.

“We will do an exhaustive nationwide search on his replacement when that vacancy is created,” Patronis added.

Patronis and Fried have reviewed a preliminary report from Patronis’ inspector general, though that report didn’t include an 11-page statement by Rubin contesting the allegations.

Rubin’s statement sought to tie the sexual-harassment complaint to a separate decision not to hire Kimberly Grippa, the ex-wife of a friend of Paul Mitchell, a prominent Tallahassee lobbyist with the Southern Strategy Group firm.

“I want that to happen as soon as possible, certainly as soon as we have a report that is complete,” Moody said Tuesday.

The report won’t be made public until the investigation is completed.

Rubin, hired to the $166,000-a-year position by DeSantis and the Cabinet in late February, has through his attorneys strongly refuted the harassment allegation and refused to resign.

Rubin in his statement contended Mitchell was angered when told Grippa wasn’t qualified. In his statement, Rubin said Mitchell argued, “Her qualifications are irrelevant. You were just supposed to hire her!”

The statement also claims Mitchell was aware of the sexual-harassment accusation before the complaint was formally filed and had already drafted a resignation letter for Rubin. It also said Mitchell later texted and called Rubin’s father to try to force a resignation.

Patronis on Tuesday continued to defend the background check his office did on Rubin. However, Patronis said changes will be made.

“Only a damn fool won’t change,” Patronis said. “We will embrace the newest types of technology that unfortunately, are part of the new world we live in, including looking at social media.”

Questions about the state’s background check have been raised after Bloomberg Law published a report last month detailing allegations of inappropriate behavior by Rubin toward female colleagues at prior jobs and inconsistencies in his self-reported employment history.

Rubin in his statement described an “ensuing media campaign” against him, including “an article that incorrectly reported that I had falsified my resume, and that I had been fired from my last job for sexual harassment,” as part of pressure tactics.

At the end, Patronis said Rubin’s credentials were “fitting for the job.”

“Unfortunately, the allegations that have come up have shown that a workplace environment he has created are unacceptable,” Patronis said.