Actor and producer Daniel Dae Kim testifies before the House Judiciary Subcommittee on the Constitution, Civil Rights and Civil Liberties.

LOS ANGELES - Asian American and Pacific Islander Heritage Month celebrates the diversity of cultures and the groundbreaking contributions AAPI people have had in the United States.

Celebrating the AAPI community for the entire month of May in the U.S. began in June 1977 when U.S. Rep. Frank Horton, R-N.Y., introduced a joint resolution that called for the first 10 days in May to be proclaimed Pacific/Asian American Heritage Week.

A month later, Sen. Daniel Inouye, D-Hawaii, introduced a similar bill, but instead called it Asian/Pacific American Heritage Week. Neither of the bills passed. 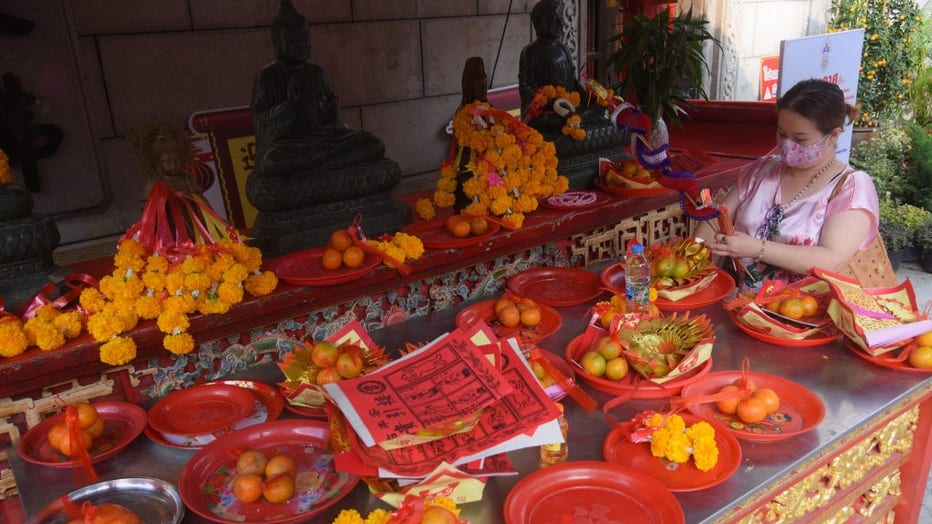 Nearly a year later after he first introduced his original resolution, Horton presented House Joint Resolution 1007 in June 1978 which called for President Jimmy Carter and future presidents to "proclaim a week, which is to include the seventh and tenth of the month, during the first ten days in May of 1979 as ‘Asian/Pacific American Heritage Week.’"

The joint resolution passed and Carter signed it into law on Oct. 5, 1978.

"In 1992, Congress passed Public Law 102-450 (PDF, 285kb) which annually designated May as Asian/Pacific American Heritage Month," according to AsianPacificHeritage.gov. 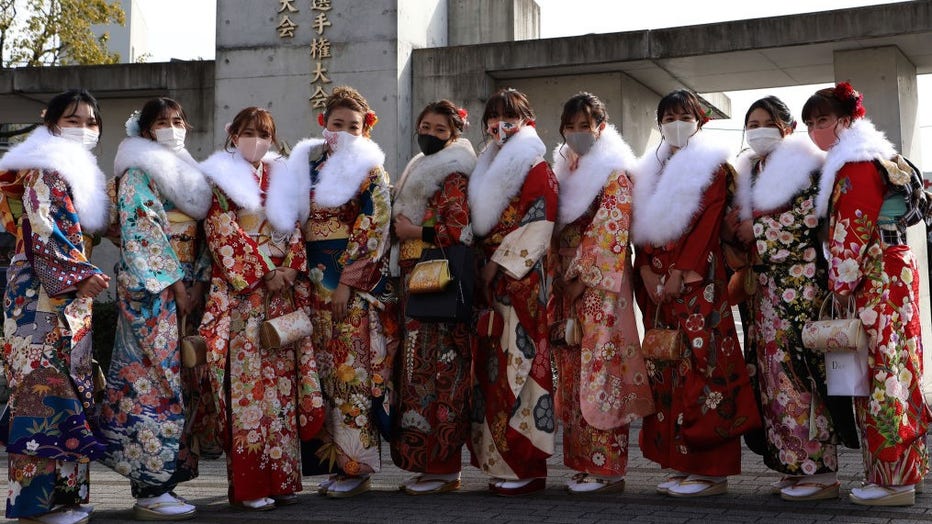 "The month of May was chosen to commemorate the immigration of the first Japanese to the United States on May 7, 1843, and to mark the anniversary of the completion of the transcontinental railroad on May 10, 1869. The majority of the workers who laid the tracks were Chinese immigrants," the website reads.

AAPI communities are growing in the U.S.

Asian Americans and Pacific Islanders make up about 5.7% of the entire U.S. population, which was about 23 million people as of 2019, according to the U.S. Department of Health and Human Services Office of Minority Health (OMH).

AAPI are defined as people having origins in East Asia, Southeast Asia, or the Indian subcontinent and the Pacific islands of Melanesia as well as Polynesia. 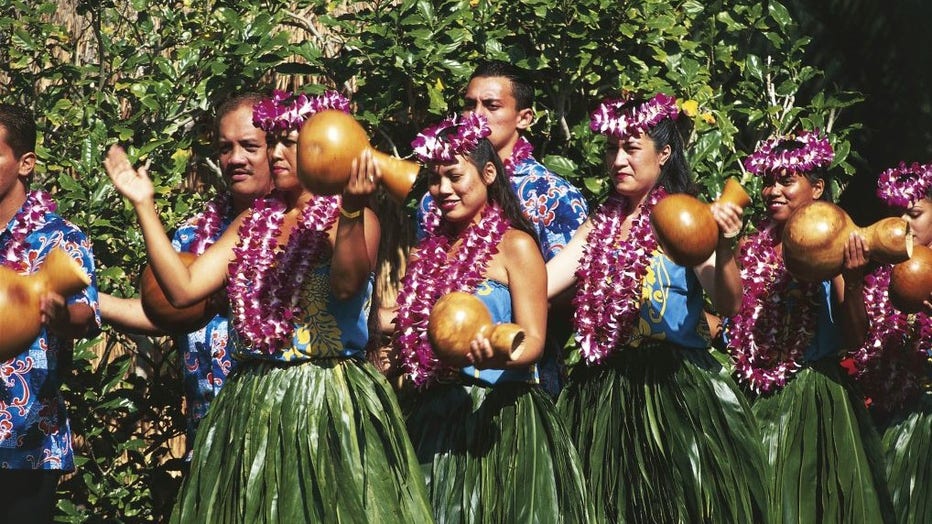 As one of the largest ethnic groups making a home in the U.S., AAPI are also the fastest-growing group in the country whose population is projected to surpass 46 million by 2060, according to the Pew Research Center.

Contributions made by people who are part of the AAPI community are wide-ranging, from science and technology to politics and film.

Chien-Shiung Wu, known as the first lady of physics, was the only known Chinese person to work on the Manhattan Project in 1944. She made major contributions in detecting radiation poisoning and decay and was the first woman to be president of the American Physical Society, according to the National Park Service. 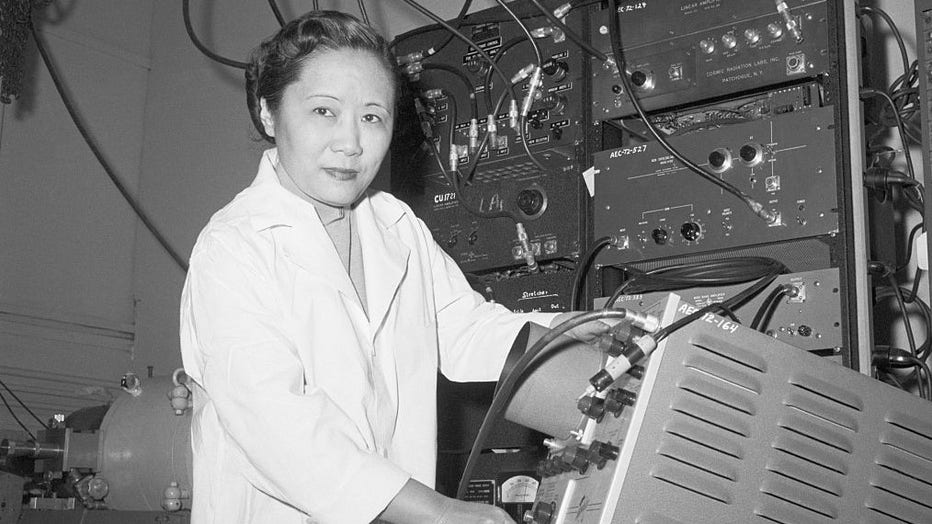 Ajay Bhatt is an Indian-born computer architect who led the team at Intel who created the Universal Serial Bus, more commonly known as a USB.

Bhatt also created the PCI Express which is a connector most computers possess that increases bandwidth and speeds up computers.

"I had a hard time when people said things couldn't be done, but that's when I got more energy," Bhatt told NPR in 2019. "When you get a lot of opposition, you got to feel that you're working on a problem that needs to be solved." 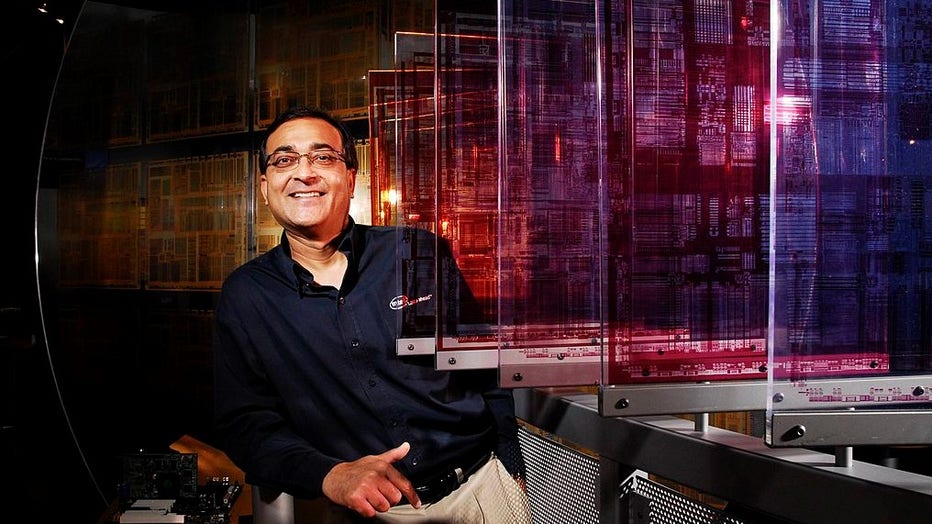 In 1957, Dalip Saund, who was often referred to as "Judge," was the first Asian-American, Indian-American and first Sikh U.S. Representative to be sworn into Congress.

The former judge was a fierce advocate for the farmers in his southern California district and championed efforts to open citizenship to people of Indian descent who were living in the states in the 1940s.

"He worked long hours to build support, and, eventually, Congress passed a bill allowing Indian immigrants to pursue naturalization. Saund became a U.S. citizen three and a half years later on December 16, 1949," according to the U.S. House of Representatives. 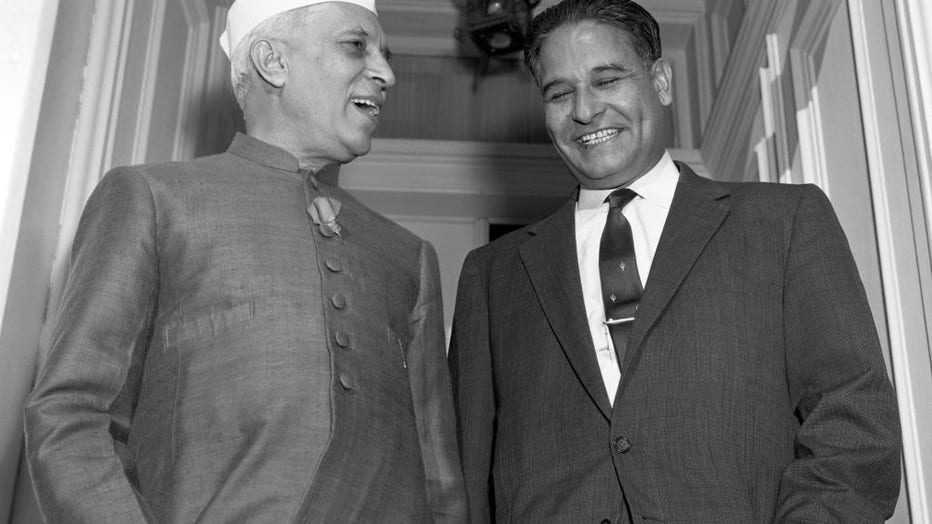 Another notable figure in AAPI history is Larry Itliong. Itliong emigrated from the Philippines to Stockton, California in 1929 when he was 15 years old. He had dreams of being an attorney, but due to poverty and the racism he endured, he was unable to achieve that dream.

But when one door closes, another opens. Itliong instead became a labor leader who organized West Coast agricultural workers and co-founded the United Farm Workers and was involved in a lifelong fight for the farmworkers union, according to AsianSociety.org.

Itliong convinced thousands of grape workers to go on strike against local vineyards, demanding better pay and the right to form a union. 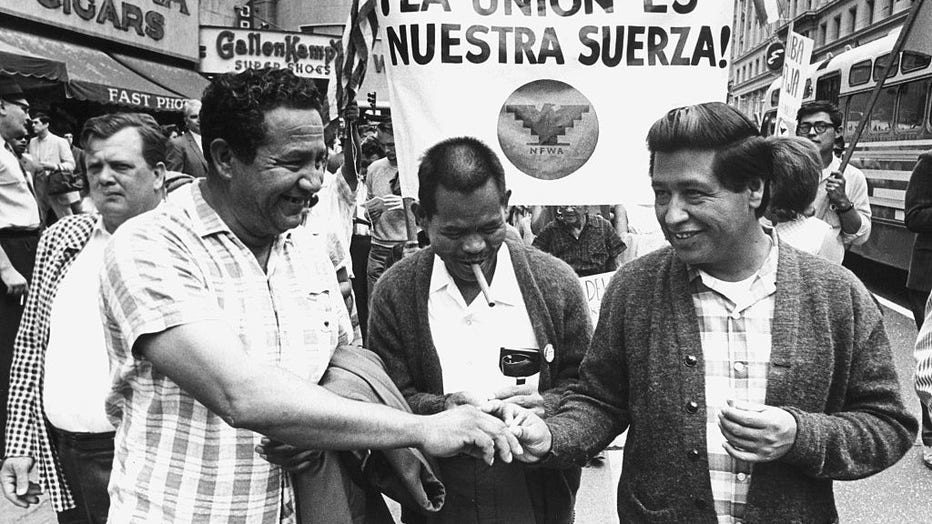 The United Farm Workers was created in 1966 and "Itliong negotiated with the growers that a percentage of each grape box picked would support the retirement facility. Over the course of five years, the strike garnered international recognition and was supported by major celebrities and politicians of the time, with people from across the U.S. donating money, food and clothing to the UFW," according to Smithsonian Magazine.

And in 1970, more than 30 Delano grape growers in Delano agreed to a pay increase as well as medical insurance plan and established controls over toxic pesticides.

Yuri Kochiyama, a Japanese American and native of San Pedro, California, is a known political activist who, after the attack on Pearl Harbor in 1941, suffered extreme racism along with her family.

RELATED: Texas Asian-American leaders join together to speak out against hate 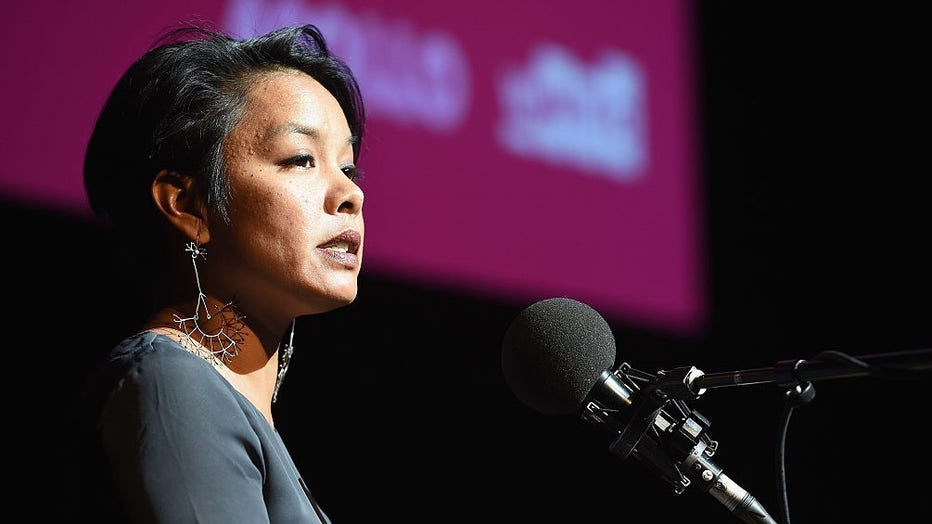 FILE - Yuri Kochiyama tribute by her granddaughter Akemi Kochiyama at The Apollo Theater on Jan. 18, 2015 in New York City.

Kochiyama spent two years in a concentration camp in Arkansas following the Pearl Harbor bombings which fueled a fire in her that would soon lead to her political activism in the 1960s, according to the Zinn Education Project.

"She was a fixture in support movements involving organizations such as the Young Lords and the Harlem Community for Self Defense. As founder of Asian Americans for Action, she also sought to build a more political Asian American movement that would link itself to the struggle for Black liberation," the Zinn Education Project said.

Kochiyama soon met and joined forces with Malcolm X working for racial justice and human rights. Kochiyama was present on the day Malcolm X was shot in 1965. 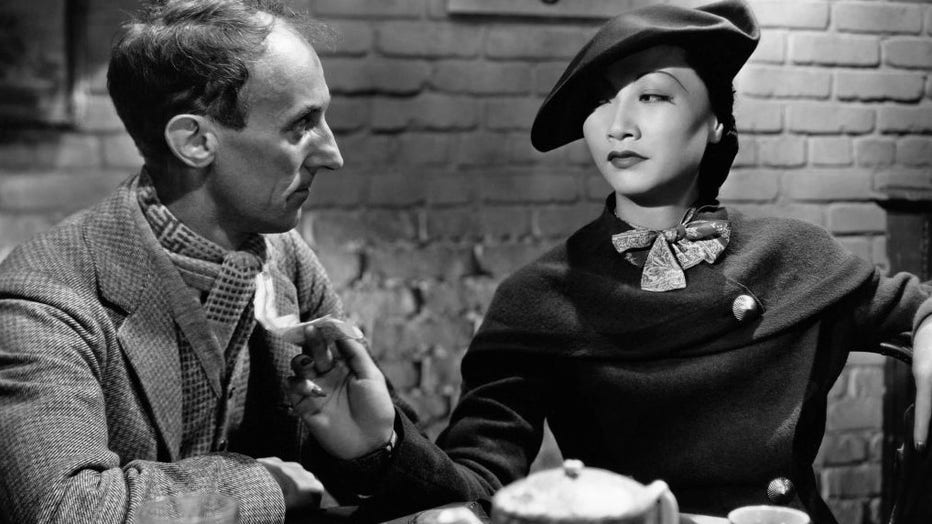 FILE - Actress Anna May Wong and John Rogers in a scene from the movie "Limehouse Blues."

A true trailblazer in Hollywood, Anna May Wong was the first Chinese-American film star in the states and was featured in over 60 movies.

She had various roles in silent movies, television and even landed a role in one of the first technicolor films ever shot, according to WomensHistory.org.

While Wong accepted stereotypical roles as the supporting Asian actress in all-white films, she was outspoken about how unfairly Hollywood typecasted and portrayed minorities, even leaving America for a time to go to Europe and pursue her acting career further.

Wong even attempted opening her own film studio but had to shut down after her business partner was caught allegedly participating in "bad business practices," according to WomensHistory.org. She died at the age of 56 due to a heart attack, but Wong will always be known as the first true Asian American movie star, blazing a trail in the film industry. 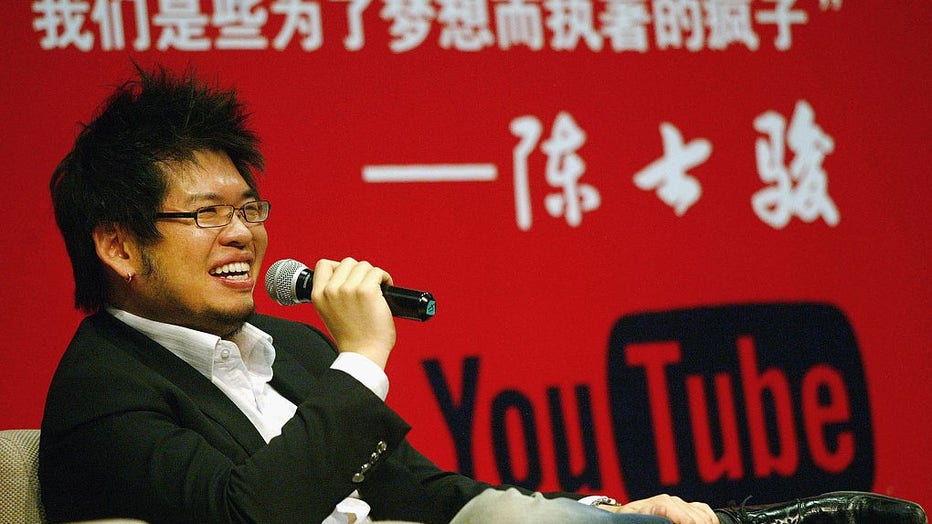 Steve Chen, a Taiwanese immigrant, is the co-founder of YouTube and has contributed to the pivotal shift in online video content production and created a platform for people at home to turn content production into multi-million dollar careers.

The idea for YouTube came after Chen and his friend and co-founder, Chad Hurley, were at a dinner party and couldn’t find an easy way to share videos. "Realizing that digital photos were easier to share thanks to websites like Flickr, they reasoned that a similar software package for videos was possible too. The idea was that it had to be easy to use and not require downloading software," according to the Immigrant Learning Center.

"Chen was named in Business 2.0’s "50 Most Influential People," GQ’s "Men of the Year," Time magazine’s "Best Invention of the Year" and Fortune’s "Most Powerful People in Business." Chen became a multi-millionaire after YouTube was bought by Google in 2009 for $1.65 billion," the learning center said.

President Joe Biden issued a proclamation on May 1 recognizing "the history and achievements of Asian Americans, Native Hawaiians, and Pacific Islanders across our nation."

"In the midst of a difficult year of pain and fear, we reflect on the tradition of leadership, resilience, and courage shown by AANHPI communities, and recommit to the struggle for AANHPI equity," the proclamation read. 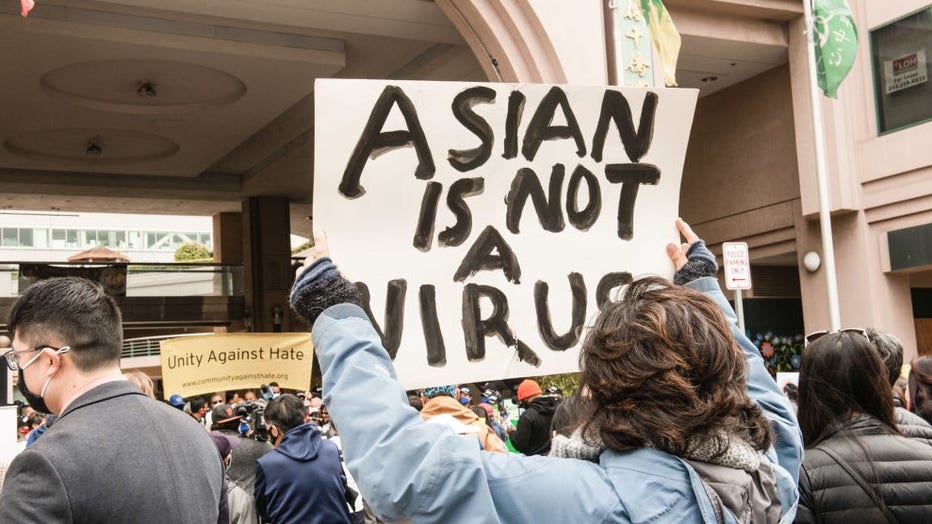 FILE - A protester holding a placard against Asian hate during a demonstration in the Oakland Community.

"We also celebrate and honor the invaluable contributions the AANHPI communities have made to our Nation's culture and the arts, law, science and technology, sports and public service -- including the courageous AANHPIs who have served on the front lines of the COVID-19 pandemic as health care providers, first responders, teachers, and other essential workers," the statement added.

The White House also highlighted Vice President Kamala Harris for her achievements, including the fact that she is the first person of South Asian descent to hold the office.

Most importantly, the proclamation noted the "heightened fear" in the Asian American community.

"Our Nation continues to grieve the senseless killings of six women of Asian descent in Atlanta, and the unconscionable acts of violence victimizing our beloved Asian American seniors in cities across the country," the proclamation read.

Since the onset of the COVID-19 pandemic, Asian Americans and Pacific Islanders have reported an uptick in violence toward their communities. More than 3,000 incidents have been reported to Stop AAPI Hate, a California-based reporting center for such crimes, and its partner advocacy groups, since mid-March 2020. 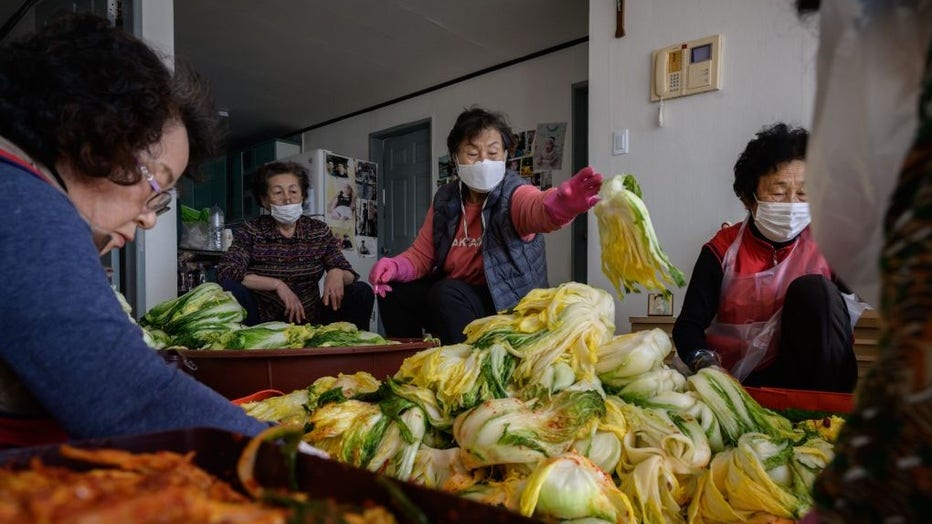 FILE - Lee Young-ja prepare cabbages to make kimchi, during a traditional communal process known as 'kimjang', at her home.

On April 22, the Senate passed the COVID-19 Hate Crimes Act, a bill that aims to end violence specifically targeted at Asian communities in the U.S.

It would assign a point person within the Justice Department to expedite the review of COVID-19-related hate crimes and provide support for local law enforcement to respond to such incidents.

Throughout history, "Asian Americans have confronted a long legacy of exclusion and inequity in relation to school policies and practices, particularly during periods of changing demographics, economic recession, or war. In spite of historic, linguistic differences, distinct Asian nationalities have been grouped together and treated similarly in schools and in the larger society. The grouping of Asian Americans together, then, makes sense in light of historic links from the past to the present," according to AsianSociety.org.

FOX News and Jordan Smith contributed to this report.