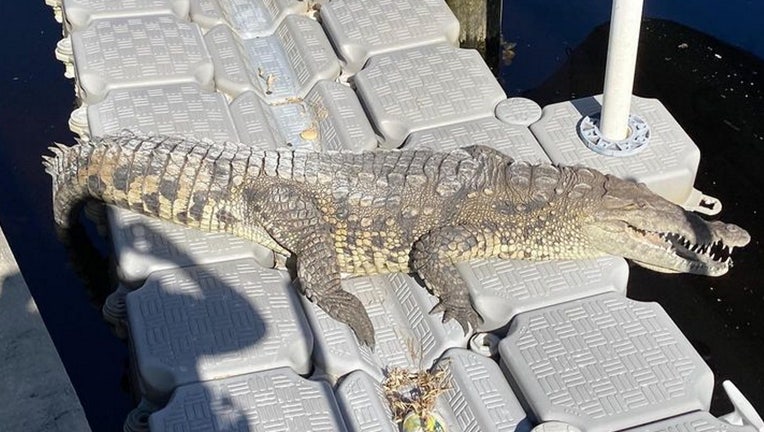 PUNTA GORDA, Fla. - A Florida woman spotted what she thought was an alligator in her backyard -- only to quickly realize the large reptile was actually a rare crocodile.

The Port Charlotte Sun reports that Punta Gorda police responded to the home, finding the crocodile on Mona Vieregg's dock. Officers then contacted the Florida Fish and Wildlife Conservation Commission. A police report said the animal was 10 to 15 feet long.

FWC brought in state alligator trapper Tracy Hansen, who estimated the reptile's age to be about 70 years old. He said it was one of the biggest crocodiles he's seen.

Vieregg said neighbors had spotted the croc in the canal for several weeks, but thought it was an alligator until it climbed up onto her dock.

While American alligators are common sights in Florida, crocodiles are not.

According to FWC, American crocodiles live throughout the Caribbean and can be spotted at the northern end of their range in the most southern tip of Florida and the Florida Keys. Seeing one further north is rare.

"They’re typically considered transient, so if they are seen in northern extremes, they don’t typically establish there," Kilbourne told the paper.

Alligators and crocodiles have similar appearances, but there are ways to tell them apart. Alligators are black in color with a broad, rounded snout, while crocodiles have a more grayish or green appearance and a narrow, tapered snout. When an alligator's mouth is closed, only its upper teeth are exposed; in contrast, a crocodile's fourth tooth on its lower jaw is exposed when its mouth is shut.

American crocodiles are listed as an endangered species in the state of Florida, but are considered threatened at the federal level. Researchers estimate that up to 2,000 crocodiles can be found in the Sunshine State.