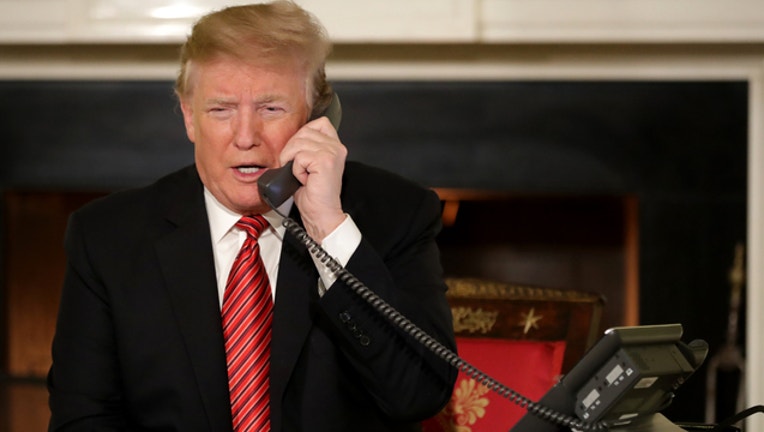 WASHINGTON (AP) - A 7-year-old girl who talked to President Donald Trump on Christmas Eve still left out milk and cookies for Santa despite the president telling her it was "marginal" for a child of her age to still believe.

Then again, Collman Lloyd of Lexington, South Carolina, says she had never heard the word "marginal" before.

Collman had called the NORAD Tracks Santa program Monday night to check on Santa's journey delivering toys. In an interview with the Post and Courier of Charleston, she said the scientist who answered the NORAD phone asked her if she would like to speak to the president.

Six minutes later, Trump was on the line. "Are you still a believer in Santa?" Trump asked. When she responded, "Yes, sir," the president added, "Because at 7, that's marginal, right?"

Trump's chat with Collman was initially reported as being with a boy named Coleman. Only Trump's end of the conversation could be heard by reporters, but Collman's family later posted video of the call on YouTube.

Collman told the Post and Courier that she and her 10-year-old sister and 5-year-old brother left iced sugar cookies and chocolate milk for Santa. She reported that Christmas morning, the food was gone and presents were under the tree.

In addition to the NORAD Tracks Santa program and church services Christmas Eve, Trump participated in another holiday tradition, wishing U.S. troops stationed around the country and the globe a merry Christmas. He spoke Tuesday by video conference to members of all five branches of the U.S. military.

"I know it's a great sacrifice for you to be away from your families, but I want you to know that every American family is eternally grateful to you, and we're holding you close in our hearts, thoughts and prayers," Trump said. "We love what you do and love your work. Amazing people."

The president spent a rare Christmas in Washington because of a stalemate with Congress over government funding that left several departments and agencies shuttered since the weekend, affecting the livelihoods of some 800,000 federal employees.

Trump usually celebrates Christmas at his Florida estate. He scrapped plans to travel to Palm Beach because of the shutdown.

"I thought it would be wrong for me to be with my family," he told reporters in the Oval Office after the give and take with members of the Army, Navy, Air Force, Marines and Coast Guard from their stations in Guam, Bahrain, Qatar and Alaska.

"My family is in Florida, Palm Beach, and I just didn't want to go down and be there when other people are hurting," Trump said. He didn't say which family members were at the Mar-a-Lago estate.