Two couples are behind bars, charged with attempted first-degree murder after leaving an innocent bouncer from 64 North paralyzed last month.

“ I am stoked to get these people off the street,” said Detective Annemarie Esan.

“As they were passing the bar, there was a pedestrian crossing the street, and with little regard for the pedestrian, they bumped into him. The pedestrian said something to them, which got their attention,” Detective Esan said.

That pedestrian quickly realized there was about to be a problem, according to the detective, and ran into 64 North for safety. 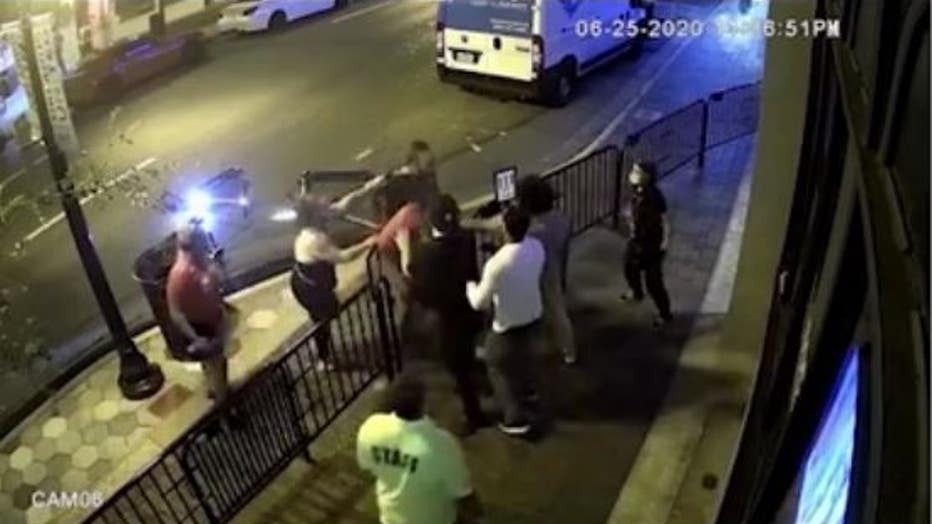 Police say the suspects were after him, and surveillance video caught what happened next.

“One of the subjects throat-punched one of the female security personnel. A large fight ensued. At one point, what would be my victim, later on, delivers one punch to the suspect who continues to deliver punches on everyone else and it causes them to back off a bit,” Detective Esan said.

She says security cameras along Orange Avenue helped detectives piece together the suspects’ next moves.

“You can see the two females removing firearms from the impala and handing them off to the two male subjects,” Esan said.

Thirty minutes later, she says that Impala pulled up to 64 North and the male suspects ran back into the bar.

“He starts yelling for my victim. My victim turns his head, which allows William Johnson to close in on the victim,” the detective said. The bouncer was shot in the shoulder and in his back. “It’s unknown if he’ll ever be out of that wheelchair.”

Detectives arrested one couple in Georgia, the other in Michigan.

All four will be extradited back to Orlando.

“What Michigan police fugitive unit said is that this is a problematic crew. They travel a lot together. They specialize in armed robberies and drive-by shootings,” Detective Esan said.

FOX 35 News reached out to the victim.

He asked that we not publish his name, saying he wants to focus all of his attention on his recovery.