Arrests in I-4 shooting

PLANT CITY, Fla. - Hillsborough County detectives said they have arrested multiple people following the murder of 17-year-old, who was killed during a shooting on Interstate 4.

The shooting occurred on Aug. 24. That day, deputies and Florida Highway Patrol troopers responded to a report of shots fired in the eastbound lanes of the highway, near McIntosh Road. However, when they arrived, there was no obvious evidence of a shooting.

Soon after, a vehicle, riddled with bullet holes, arrived at the South Florida Baptist Hospital in Plant City. The 17-year-old male victim was injured and unconscious when the driver and passenger, both minors who were unharmed, brought him.

PREVIOUS: One dead after shooting on Interstate 4 in Hillsborough County

Investigators said the shooting was not random, but was targeted since the suspects knew the victim. 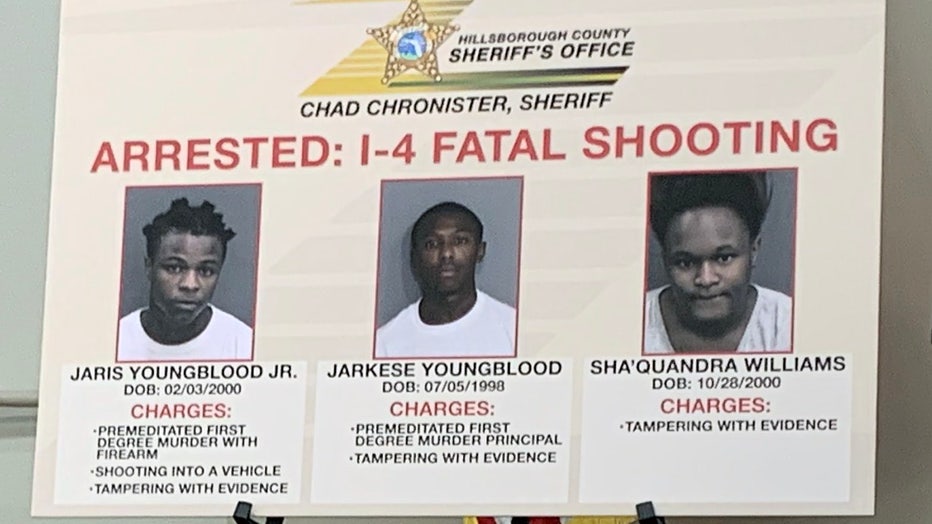 According to investigators, the suspects spotted the 17-year-old traveling in another car on I-4 and decided to open fire on the vehicle.

Witnesses on the highway called 911, reporting a gold Ford Taurus shooting at another car. Chronister said Jaris was the one who fired the shots, while Jarkese was behind the wheel. The sheriff said Williams had an infant in her lap and told the brothers to watch out for the baby during the shooting.

The 17-year-old victim, who had been riding with two friends, was struck in the torso and later died.

"The Youngblood brothers not only worked together to kill the teenage victim, they showed no regard for other innocent drivers on I-4 or even the infant child who was riding in the car with them," Chronister said in a news conference.

All three suspects face charges of tampering with evidence because, Chronister said, they wiped down their vehicle with bleach after the shooting and disposed of the vehicle at a junkyard.

RELATED: Man shot on I-4 in Tampa, suspects on the run

The shooting is one of three that occurred along I-4, while two others occurred on Interstate 75.

The first I-4 shooting happened back on June 15. FHP spotted a vehicle near 21st Street near I-4. Inside a victim had been shot, but survived.

On July 16, two men in their 20s were riding in a white Nissan Altima about 3 a.m. when suspects in a white Jeep Cherokee started shooting near the southbound exit ramp to Dr. Martin Luther King Jr. Boulevard. Responding troopers found the pair dead inside the car.

RELATED: Driver shot at on I-4 in Polk County, troopers searching for suspect

On August 22, the driver of a Toyota was found after being shot at on I-4 near the Hillsborough Avenue exit. FHP says the driver was wounded, but survived.

The most recent shooting occurred on Aug. 26 in Polk County.  A man said someone in a red Mustang shot at his car in Lakeland.