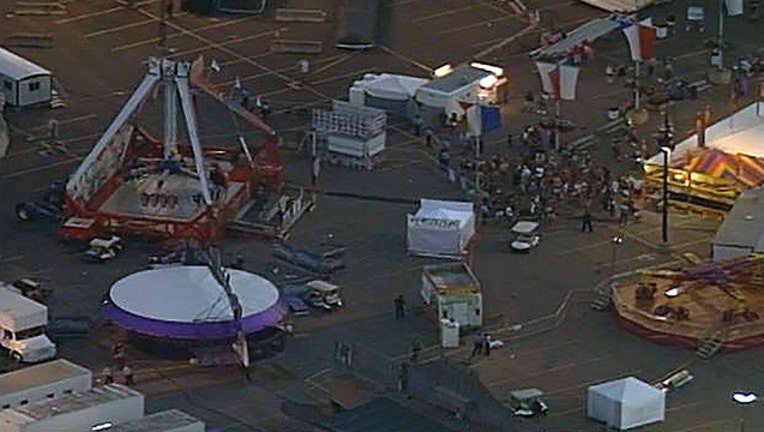 COLUMBUS, Ohio (AP) - Fire officials say one man has been killed and seven others injured in a ride malfunction at the Ohio State Fair.

Five of the injured were in critical condition and the other two were in stable condition Wednesday night at area hospitals, said Columbus Fire Battalion Chief Steve Martin.

The man who was killed was one of several who were thrown from the Fire Ball ride when it malfunctioned, Martin said.

Dramatic video captured by a bystander shows the ride swinging back and forth like a pendulum and spinning in the air when it crashes into something and part of the ride flies off, throwing riders to the ground.  WARNING: Video may be considered graphic and viewer discretion is advised. Watch here.

In a statement, Republican Gov. John Kasich said he is "terribly saddened by this accident, by the loss of life and that people were injured enjoying Ohio's fair."

Kasich said he has ordered a full investigation and also ordered that all fair rides be shut down until additional safety inspections can be completed.

The fair did not immediately respond to a request seeking comment. In a post on its Twitter page it said: "There has been a report of a ride incident. We are investigating and will report information as available."