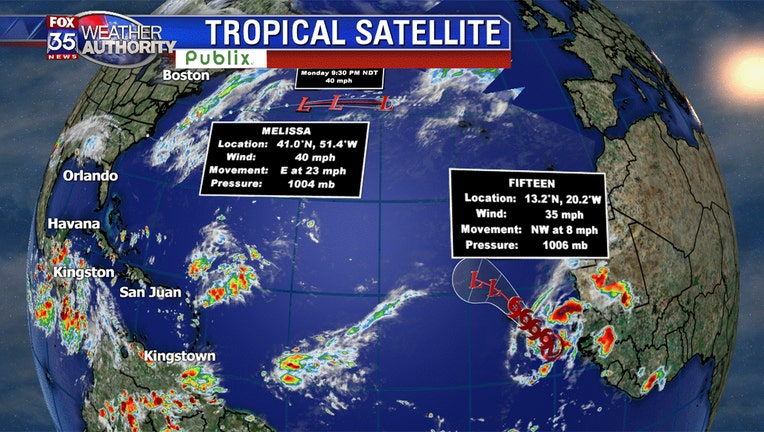 MIAMI (AP) - A tropical depression has formed southeast of the Cabo Verde islands, well offshore of the west coast of Africa.

The storm is moving to the northwest at 8 mph (13 kph). The U.S. National Hurricane Center in Miami says the storm is expected to spread heavy rains over the islands.

"Tropical Depression 15 is expected to become a tropical storm within the next 24 hours as it moves towards the United States," said FOX 35 Chief Meteorologist Glenn Richards. "Long-term forecast models show it will weaken and will dissipate within six days and will not be a threat."

Meanwhile, the National Hurricane Center in Miami says Melissa is no longer a tropical storm and poses no threat to land.   The post-tropical cyclone is weakening as it moves deeper into the Atlantic Ocean, and the dangerous swells it caused are gradually subsiding.

Forecasters said that as of midday on Monday, Melissa was about 405 miles (650 kilometers) south-southeast of Cape Race, Newfoundland, with maximum sustained winds down to 40 mph (65 kph).

No coastal watches or warnings were in effect.