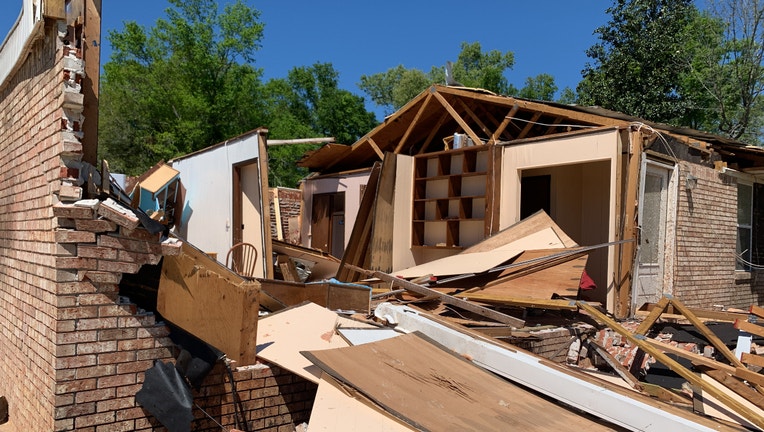 The tornado began as an EF-1 in Washington County, south of Chipley, near Gilberts Mill, where it snapped tree trunks as it moved northeastward.

The tornado crossed Orange Hill Rd. and continued on to Gilberts Mill Rd. On Gilberts Mill Rd. near Stewart Rd., a barn was destroyed, and a manufactured home was damaged and shifted on its foundation, which is in line with EF-1 damage, the NWS said.

"Snapped and uprooted trees were observed all along Gilberts Mill Rd. Further northeast, a manufactured home sustained significant damage and several outbuildings were destroyed. A camper and a greenhouse were also destroyed here, consistent with EF-1 damage," a survey statement read.

The tornado strengthened as it moved toward Jackson County, completely destroying and sweeping away an anchored double wide manufactured home and a newer, anchored single wide home. The double wide home was the site of the two fatalities, authorities said, and one person in the single wide was injured when he was thrown into the tree line grasping his mattress.  A large boat was also thrown from its trailer and overturned and the NWS surveyors said this damage was consistent with strong EF-2 winds.

The tornado continued to strengthen as it moved across Jewell Rd. and at that location, a well-built brick home was partially destroyed and likely was sideswiped by the tornado. A car in the driveway was pushed off of the driveway, and an attached carport was destroyed.

Across the street, a wood frame home with block foundation was completely destroyed and swept from the foundation, leaving only some cinder blocks and a floor joist. The debris from the house was thrown into a pole barn which was also destroyed. An injury occurred at this site when the home occupant ran to the barn and dove under his pickup truck. The damage to this home and the brick home are consistent with EF-3 damage and maximum winds of 150 mph, according to surveyors.

The tornado weakened some as it moved northeast, damaging a home and snapping a couple of tree trunks along Dilmore Rd before lifting just south of Interstate 10 near Standland Rd.

Damage near beginning of the tornado along Orange Hill Rd. Photo: NWS Survey