Toni Pressley back to soccer after battling breast cancer

Two days before the last game of the Orlando Pride's season, Toni Pressley is returning to the sport after months of recovery following a diagnosis of breast cancer.

“It’s going to be an amazing feeling,” Toni said.

She’ll be lacing up her cleats and playing under the big lights for the first time since July.

“Three or four months ago, not knowing what my future held, to now being able to play again the sport that I love is just unbelievable. And, to do it before the season ends I think it’s even greater. “

One morning during the spring, a member of the Pride’s staff shared that she had breast cancer, urging the players to be in tune with their bodies.  Early summer, the 29-year-old Melbourne, Florida native said she started feeling a pain that she couldn’t ignore.

“Just tenderness and a lump.  I was like mmm, okay, I’m pretty sore pretty much every day,” Toni explained.

The pro athlete, in tip-top shape, went to see her doctor for peace of mind.  She never expected the call she got, you have breast cancer.

The lump in her right breast was large enough that she had her only choice was to get a mastectomy. She kept all that a secret until she and her doctor came up with their game plan.

“So I decided to do a double mastectomy, just in case, preventative measures. I just wanted to get it all out. Have no worries. Both sides,” Toni explained. 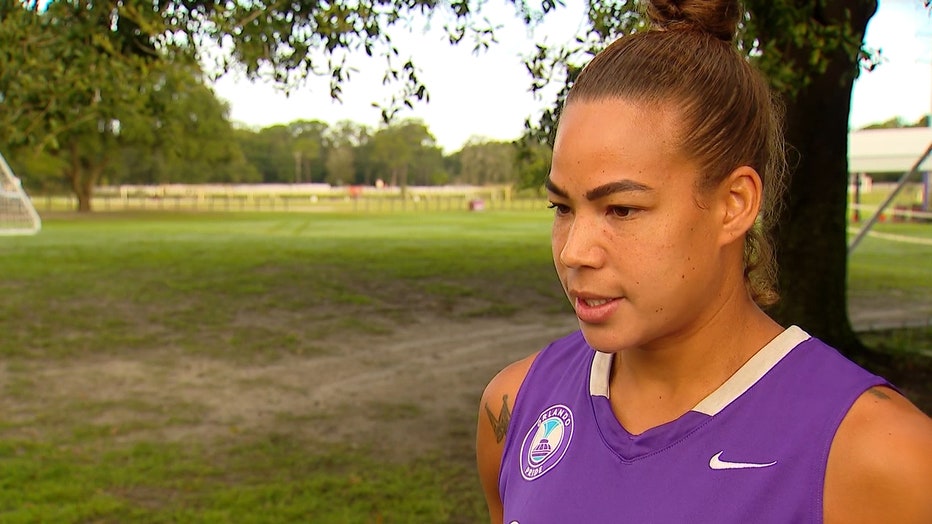 She says once she knew their action plan, she knew it was time to tell her teammates.

“It was the hardest part for me. I think, in part because, I know once I told them, I would have to stop coming to training.  That, that part of my life for a moment would end,” Toni said.

That, and she didn’t want her teammates to worry about her.  With Toni’s permission, the Orlando Pride organization publicly announced that Toni had undergone successful surgery for breast cancer and that she’d be stepping away from the game for a little while.

Fans, opponents, the National Women’s Soccer League and her teammates showed her tremendous support at the stadium, via phone, and on social media.  Several Pride players took the field for their first game in October with their ponytails dyed pink, for Breast Cancer Awareness Month.  While sidelined, Pride Head Coach Mark Skinner says Toni never took her head out of the game.

He says Toni continues to amaze him every single day.

“If you look at the ridiculous time it took her to get back on the field, ridiculously short amount of time.  It shows her character,” Skinner said.

Now she’s back without restrictions.  Coach says she’ll be dressing for Saturday’s final match, which is being dedicated to Breast Cancer Awareness Month.

Toni says taking the field will be her final step in kicking cancer and getting back to feeling 100 percent like herself.

“I’m just going to try to really enjoy Saturday and really be in that moment,”  Toni said.

She said she’ll be undergoing reconstructive surgery in the off-season then start training to get back to full fitness before the start of the next National Women's Soccer League season.