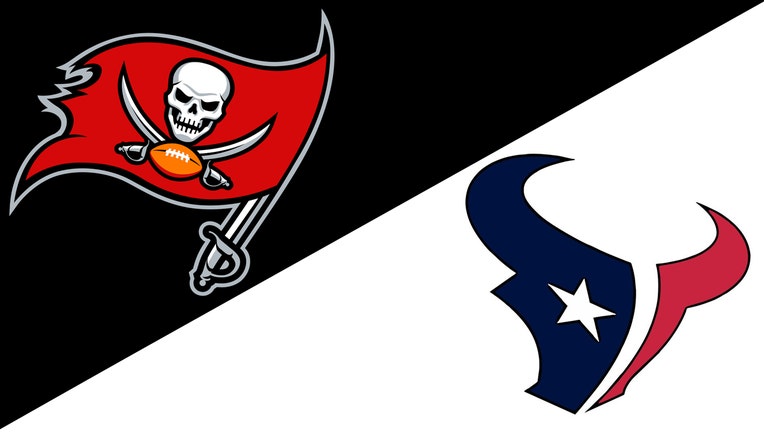 TAMPA, Fla. (AP) - A fourth AFC South title in five years is within reach for the Houston Texans, who are determined to finish the job.

Clinching another division crown and playoff berth doesn’t figure to be easy Saturday against the suddenly red-hot Tampa Bay Buccaneers, who’ve put together a strong stretch run despite already being eliminated from postseason contention.

The Texans (9-5) took sole possession of first place in the division by beating Tennessee 24-21 last week and can clinch their second straight AFC South championship by beating the Bucs (7-7), who have won four straight, with Jameis Winston making a strong case for a new contract.

Houston could also clinch with some outside help, however, the Texans would prefer to take care of business themselves.

“It’s a lot on the line. We all know that. But at the same time, you can’t look past these guys and you can’t take it for granted,” quarterback Deshaun Watson said.

“Tampa Bay is playing good right now, playing with a lot of confidence,” Watson added, “and Jameis is putting up a lot of points and a lot of yards.”

Winston is earning nearly $21 million in the final year of the contract he signed as the No. 1 overall pick in the 2015 draft. His NFL-leading 24 interceptions are one of the reasons the Bucs will miss the playoffs for the 12th consecutive season. Conversely, his league-leading 4,573 passing yards and 30 touchdown passes have helped his team remain in the running for a winning record.

The fifth-year quarterback is coming off back-to-back games with over 450 yards passing, including a career-best 458 last week at Detroit, where he continued to flourish despite playing with an injury-depleted group of receivers.

Pro Bowl selections Mike Evans and Chris Godwin — both 1,000-yard receivers — won’t be available to Winston against the Texans. Nevertheless, the Bucs relish the challenge of gauging their progress against a playoff contender.

“For us, it is a big December game. It’s a good measuring stick even without whoever is not playing. It doesn’t matter. It’s still going to be a team going to the playoffs,” Bucs coach Bruce Arians said. “We’ve beaten one team that was almost in the playoffs. We went to overtime with a No. 1 seed in their place. (Those are) the things I think you judge on when you look back, when you get to that rear view mirror, and you start evaluating where we’re at next year.”

When Watson steps on the field at Raymond James Stadium on Saturday it will be the first time the quarterback has played there since leading Clemson to a national Championship with a 35-31 win over Alabama in 2017.

“It’s going to bring back a lot of memories for sure … it was just a great day overall,” he said. “So, it was a cool environment, cool stadium and definitely a lot of fun.”

Watson threw a 2-yard touchdown pass to Hunter Renfrow with 1 second remaining to seal the victory. He plans to take a minute to return to the end zone where he threw that game winner.

“Yeah, that right corner down toward the tunnel is definitely a spot that I will have to revisit for sure,” Watson said.

With Evans and Scotty Miller placed on injured reserve this week and Godwin also sidelined by a hamstring injury, Winston will have to rely a largely inexperienced group of wide receivers led by Breshad Perriman and Justin Watson. Tight end O.J. Howard and Cameron also figure to have bigger roles in the game plan.

“You’ve got guys that can go out there and get the job done,” Winston said. “Now it gives us a chance to get them the ball.”

Houston’s tight end trio of Darren Fells, Jordan Akins and Jordan Thomas have been important to the team’s success this season. Fells has the second-most touchdown receptions by a tight end in the NFL this season with seven and Akins has two. Their nine TD receptions are tied for the most by tight ends through Week 15 in franchise history and are tied for third most in the league this season.

“They’ve been blocking, catching balls, making plays, catching touchdowns … three tight ends that are all great friends and not selfish at all,” Watson said. “They all want the best for each other and they want the best for this team, so they keep improving each and every week and making big-time plays.”

Fells and Akins have set career highs in receptions and yards this season. Fells has 31 catches for 314 yards and Akins has 31 grabs for 364 yards. Thomas missed the first 10 games this season with a rib injury and doesn’t have a reception as he’s primarily been used for blocking in his four games.

“All three guys have their … different strengths in what they can do best,” Watson said. “You can put all three on the field and all can go out there and produce at the same time. It’s pretty cool to have that.”