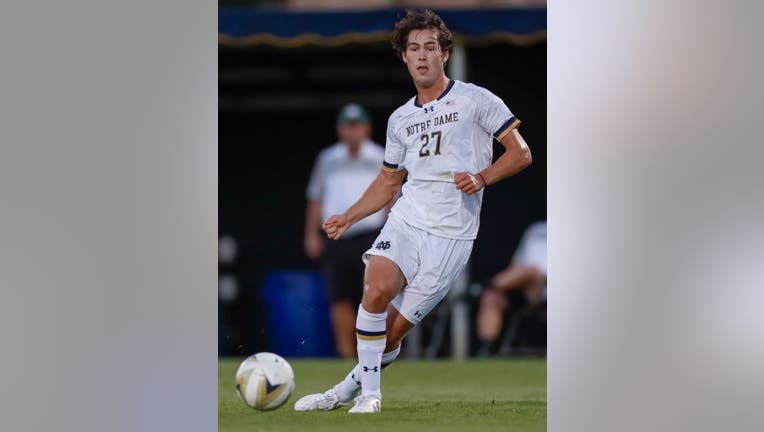 SOUTH BEND, IN - SEPTEMBER 17: Jack Lynn #27 of Notre Dame Fighting Irish passes the ball during the game against the Michigan State Spartans at Alumni Stadium on September 17, 2018 in South Bend, Indiana. (Photo by Michael Hickey/Getty Images)

In addition, the Lions selected defender Nathan Dossantos out of Marshall University at No. 46 overall and Nick Taylor the following round (No. 74 overall) out of the University of Central Florida (UCF).

"Yeah we’re very satisfied, we thought that it was a great draft considering we had number 18," said Orlando City EVP of Soccer Operations Luiz Muzzi. "You don’t expect to have the guy that you wanted at that position, so considering that alone, we’re very happy with the draft. The guys have a chance to come in and show their talent, and right now we’re happy with the characteristics that we found in those guys."

A native of St. Louis, Mo., Lynn comes to Orlando following a four-year career in South Bend, totaling 79 appearances with 57 starts, 31 goals and eight assists in that time. As a senior, Lynn appeared 23 times for the Fighting Irish, tallying 10 goals and four assists in a season that saw Notre Dame win an ACC Championship before making a run to the NCAA College Cup, falling in the semifinal round to eventual NCAA Champions Clemson. A three time All-ACC selection, Lynn earned a First Team nod in each of his junior and senior seasons, as well as United Soccer Coaches All-Region honors those same years.

The 2021 Conference USA Defensive Player of the Year and a United Soccer Coaches First Team All-Southeast Region honoree, Dossantos joins the Lions following a senior season that saw him appear in all 18 matches for Marshall, anchoring a defense that totaled nine clean sheets last season. In two years with the Thundering Herd, Dossantos made 36 appearances, 35 of which were starts, scoring one goal and adding two assists, winning the 2020 NCAA Championship as a junior while earning United Soccer Coaches All-American and All-Region honors, a First Team All-Conference USA selection and NCAA All-Tournament Team recognition that same year. Prior to joining Marshall, Dossantos spent two years at Duquesne University, starting 33 matches and netting one finish in that time.

With their final pick of the afternoon, the Lions elected to take forward Nick Taylor from neighboring UCF at No. 74 overall. In one season with the Knights, Taylor started all 16 matches he played, netting three goals while adding nine assists. Prior to his time in Orlando, Taylor spent two seasons at Southern Methodist University, appearing 30 times, scoring two goals and tallying three assists following a freshman and sophomore season at New Mexico University. With the Lobos, Taylor appeared 29 times, scoring six goals and recording six assists, earning All-CUSA honors as a sophomore.

Midfielder Ben Bender out of Maryland was the first pick in Major League Soccer’s SuperDraft on Tuesday by expansion club Charlotte FC.

Bender was named the 2021 Big Ten Midfielder of the Year after scoring seven goals with five assists over 18 games with the Terrapins as a sophomore.

The Lions open their 2022 MLS campaign on Sunday, Feb. 27, set to host CF Montréal in a 1 p.m. ET kickoff. 2022 Season Ticket Memberships start at just $18 per match, with single-game tickets on sale at a future date. More information on ticket options can be found at the link here.