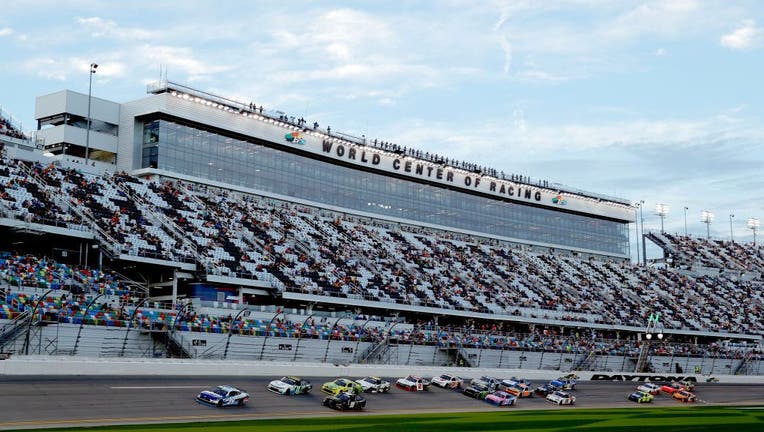 DAYTONA, Fla. - All eyes are on the Daytona International Speedway Sunday as the Daytona 500, NASCAR’s season opener, is underway on FOX. Though just before 4 p.m., the race was stopped on account of weather.

The race was halted after 15 laps because of lightning and then heavy rain. The 2 1/2-mile track takes hours to dry. Prior to the halt, 16 cars were involved in a huge crash 14 laps into the race.

Lightning in the area a few minutes later prompted officials to clear the motorsports stadium, sending socially-distanced fans into a crowded space. Drivers got out of their cars, and once the rain hit, they hit the road.

The Daytona 500 then resumed after a weather delay that lasted more than five hours and prompted several drivers to make fast-food runs outside the track.

Drivers Chase Briscoe, Ross Chastain and Tyler Reddick used the red flag to refuel, giving new meaning to fast food. The drivers left the track and made quick trips across the street to grab some grub.

Live updates from the Daytona 500

As the race began, fans and crews saluted the late Dale Earnhardt by holding up three fingers on Lap 3 during the Daytona 500, recognizing the 20th anniversary of his death, which came on the final lap of NASCAR's signature event. Earnhardt drove the famed No. 3 for Richard Childress Racing.

The death of the seven-time Cup Series champion forced NASCAR to make significant improvements in safety, changes that have saved many lives in the 20 years since. Ryan Newman survived a harrowing crash on the final lap in last year's opener, walking out of a hospital two days after everyone watching feared the worst.

RELATED: Remembering Dale Earnhardt as the 20th anniversary of his death nears

Before Sunday’s race was stopped for weather, Aric Almirola turned into pole-winner Alex Bowman and started a 16-car pileup.

Christopher Bell pushed Almirola and forced the Stewart-Haas Racing driver to bobble as he tried to correct the car. Among the cars that sent cars spinning and flying through the mud and getting torn up include Martin Truex Jr., Erik Jones, Jamie McMurray, Ryan Blaney, William Byron, Ryan Newman and Kurt Busch.

RELATED: Going to the Daytona 500? Here's what you need to know

Hendrick Motorsports had put Bowman and Byron on the front row.

Newman was nearly killed in a horrific accident on the last lap of last year’s Daytona 500. Newman walked away safely on Sunday and even checked on Busch as he sat in his Chevy.

Earlier, Derrike Cope was knocked out after only three laps, an ignominious end for the 62-year-old driver who won the 1990 Daytona 500.

Bubba Wallace’s car also failed inspection twice for the Daytona 500 and had to start at the back of the field. The car chief for 23XI Racing was ejected as punishment. The No. 23 Toyota passed inspection on the third time.

RELATED: How to watch the Daytona 500

Denny Hamlin won the opening stage of the Daytona 500, showing he's got a car good enough to become the first to win "The Great American Race" three straight years.

Hamlin moved to the front shortly after the race restarted following a weather delay that lasted nearly six hours. Joe Gibbs Racing teammate Kyle Busch stayed in line behind him until getting shuffled back on the final lap of the stage, which took more than seven hours to complete.