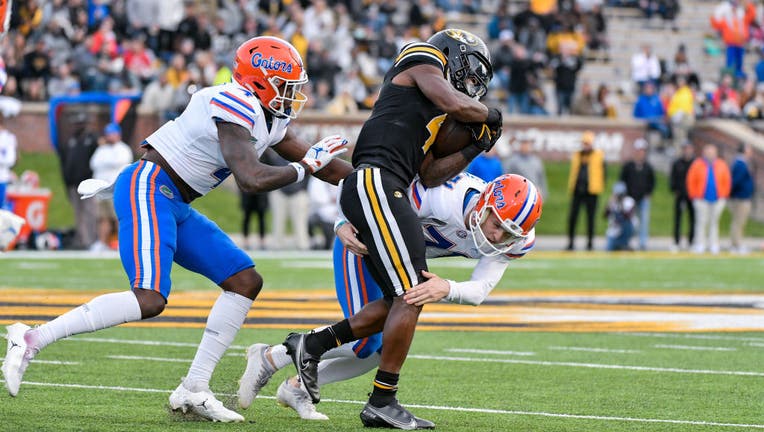 COLUMBIA, MO - NOVEMBER 20: Florida Gators place kicker Chris Howard (71) makes the tackle on Missouri Tigers running back Elijah Young (4) to keep him from getting a long kick-off return during a game between the Florida Gators and the Missouri Tige

The Tigers (6-5, 3-4 Southeastern Conference) drew within a point on Tyler Badie’s 13-yard touchdown run, and Missouri coach Eli Drinkwitz elected to go for 2 rather than send the game to a second overtime with a PAT kick. Parker, a tight end, slipped undetected into the left side of the end zone and caught the lobbed pass.

Florida (5-6, 2-6 SEC) got the ball first in overtime, and Emory Jones caught a 6-yard touchdown pass from wide receiver Trent Whittemore on a trick play to give the Gators a brief lead. Jones completed 20 of 32 passes for 261 yards and a touchdown.

Missouri entered the game with the nation’s 118th-ranked defense, and Florida had yielded 92 points in its last two games. No matter — the defenses dominated in a stingy battle of field position and field goals.

Florida finally broke the touchdown drought on its first drive of the second half. Jones hit Jacob Copeland on a 49-yard pass to set up a Dameon Pierce 2-yard scoring run. Missouri answered early in the fourth quarter when Bazelak connected with tight end Niko Hea on a 41-yard touchdown pass.

Missouri missed a chance to take the lead with 1:04 left in regulation when Mevis — who had made 17 of 18 field-goal attempts this season — pushed a 46-yarder wide right. Florida coach Dan Mullen elected to run out the clock and take his chances in overtime rather than throw the ball.

Florida: With the Gators’ fourth straight SEC loss, the speculation about coach Dan Mullen’s job security will grow even louder. Florida is 2-9 in its last 11 games against Power 5 opponents.

Missouri: The Tigers secured bowl eligibility for the second time in Eli Drinkwitz’s two-year tenure as coach. Missouri had higher hopes than a six-win season, but after losing its first three SEC games, Drinkwitz deserves credit for keeping the team together and salvaging the season.

Florida: The Gators finish the regular season at home against Florida State on Nov. 27.

Missouri: The Tigers play at Arkansas on Friday in their regular-season finale.

Sign up for the AP’s college football newsletter: https://apnews.com/cfbtop25