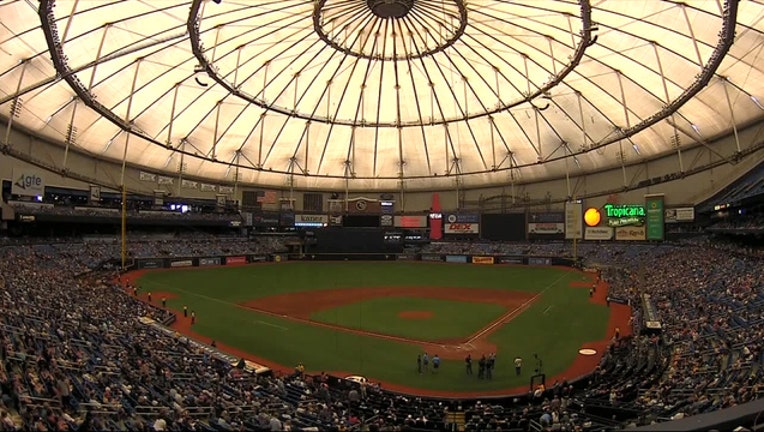 ST. PETERSBURG, Fla. (AP) - J.D. Martinez homered and drove in four runs, including an RBI double in the ninth inning following Tampa Bay's curious decision to put a position player on the mound, and the Boston Red Sox beat the Rays 9-4 Monday night.

Eduardo Rodriguez (12-4) allowed two hits over seven scoreless innings to win his sixth straight decision. He limited the sputtering Rays to a pair of infield singles and four walks before being replaced by Nathan Eovaldi, who returned from a three-month stint on the injured list to pitch for the first time since April 17.

Eovaldi, who had surgery to remove a loose body in his right elbow, labored through two-thirds of an inning, losing the shutout on Travis d'Arnaud's RBI double. Austin Meadows also doubled home a run, and Yandy Diaz added an RBI single off the right-hander.

Despite cutting the lead to five, Tampa Bay manager Kevin Cash sent out rookie infielder Mike Brosseau to pitch the ninth. Brosseau, who started the game at second base, allowed doubles to Xander Bogaerts and Martinez. He was the fifth player to pitch for the Rays in the game.

Major League Baseball and the players union agreed in March on a rule change for 2020 prohibiting position players from pitching through the ninth inning unless the player's team is winning or losing by six or more runs.

Martinez, Andrew Benintendi and Sam Travis homered in the third inning, when the Red Sox scored seven runs against former Boston prospect Jalen Beeks (5-1), who lost for the first time since being sent to the Rays in a trade for Eovaldi last summer. Martinez's three-run blast was the biggest blow.

Rafael Devers also had a two-run double in the third, giving him 27 RBIs this month. Bogaerts' single in the fourth off Chaz Roe drove in an eighth run charged to Beeks, a 26-year-old left-hander making his second career start.

The Red Sox, who are 6-5 since the All-Star break, pulled within one game of the Rays for third place in the AL wild card standings.

Tampa Bay has dropped six of seven and been outscored 41-17 over that stretch.

Beeks, who had won 10 consecutive decisions in relief since joining Tampa Bay in the trade that sent Eovaldi to Boston last July 27, allowed eight runs and seven hits over 2 1/3 innings in his first start since making his major league debut for the Red Sox against Detroit on June 7, 2018.

Rodriguez, meanwhile, improved to 8-1 over his last 11 starts. The lone hits off the left-hander were Guillermo Heredia's broken-bat infield single in the third and Brosseau's single to shortstop with one out in the seventh.

Red Sox: 1B Mitch Moreland, on the injured list since June 8 with a right quad strain, will probably be activated Tuesday. ... INF Michael Chavis missed his second straight game since experiencing back spasms Saturday night. ... RHP Steven Wright, who went on the injured list July 14 with a great right toe contusion, remains sore, according to manager Alex Cora.

Rays: INF Matt Duffy, out all season with a strained left hamstring, could be reinstated from the 60-day injured list Tuesday. ... Cash said All-Star INF Brandon Lowe, sidelined by a right shin bone bruise since July 3, is "still a ways away" from returning. ... INF Daniel Robertson (right knee inflammation) started a rehab assignment with Class A Charlotte and went 0 for 2 with a walk.

Three-game series continues Tuesday, with the Red Sox sending LHP Chris Sale (4-9, 4.05 ERA) to the mound against RHP Yonny Chirinos (8-5, 3.29), who's 1-1 lifetime in five appearances against Boston, including three starts. Sale is 9-6 all-time vs. the Rays. His career 1.92 ERA at Tropicana Field is his lowest in any park where he's made a minimum of five starts.