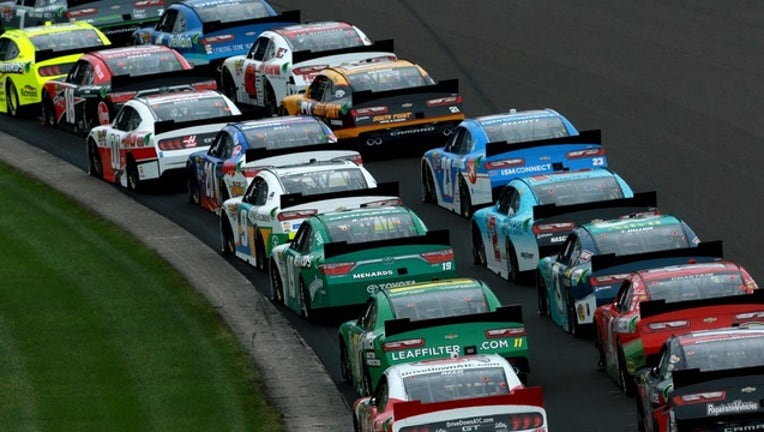 LONG POND, Pa. (AP) - Kyle Busch tossed his young son in the air twice in victory lane and sprayed champagne toward anyone dry within reach. The good times and NASCAR milestones keep piling up for Busch and Joe Gibbs Racing.

Heck, Busch might even give his Pocono Raceway trophy to his wife for a birthday present.

Take Sunday: Busch matched Hall of Fame driver Rusty Wallace for ninth on the NASCAR Cup Series career victory list with 55. He won for the fourth time this season. And the season of JGR that already includes a Daytona 500 championship and a Hall of Fame nod for patriarch Joe Gibbs shows no sign of tapering off.

Busch's enthusiasm was tempered by another race where NASCAR's rules package put passing at a minimum and made it laborious to watch 400 miles of racing. Never one to back down from his opinion, Busch has put the package on blast all season and dodged a fine from NASCAR earlier this month for an expletive-riddled rant about the new rules.

"Stop asking me package questions! I'm done answering them," he snapped at Pocono. "Next."

NASCAR's current rules package was designed to increase side-by-side racing and manufacture competition. Busch made one competitive pass for the lead when he zipped past Clint Bowyer on lap 75 and never really looked back as he closed on his first win in nearly two months. Busch took off on the final restart with nine laps left and cruised to the finish line for his 13th top-10 finish in 14 races this season.

When NASCAR haters point fingers and say racing is just cars going in circles, Sunday at Pocono can be Exhibit A.

Even Fox broadcaster Mike Joy threw up his hands as Busch took the checkered flag: "I don't want to say they made it look easy, but they certainly didn't give us a lot to talk about."

Busch, who topped 200 career wins across all three national series earlier this season, is certainly the rare talent who can make most wins look easy in any season or under any package. But Busch has been especially prickly and stood out as the most vocal critical among many drivers who have groused about the racing this season.

"There's days that I get ultimately frustrated because I don't feel like my true talents can show on the race track because I'm too limited by the air of everything that's kind of going around me," Busch said. "I can't do anything. As a race car driver, when you can't do anything, and you can't showcase what your abilities are and how good you should be, then there's certainly some tense moments and high frustrations."

And that's from the winner.

It was still another wildly successful day for Joe Gibbs Racing: Busch won, Erik Jones was third and Denny Hamlin was sixth. Martin Truex Jr. had a fast car and looked like a contender until engine woes knocked him out of the race. Hamlin opened the season with a win in the Daytona 500 in memory of J.D Gibbs, Joe's son who died earlier this year following a long battle with a degenerative neurological disease. JGR has been the class of NASCAR with a series-best nine wins and Gibbs was elected this month to the NASCAR Hall of Fame.

But a rules package that overshadowed the finish stained one more celebratory day at JGR.

"It's not that it's hard to pass, it's impossible," Hamlin said.

Here's what else happened at Pocono.

Pocono is to set host a Cup Series doubleheader weekend next season. The track traditionally has two NASCAR weekends but surrendered one to try the double June 27 and 28, 2020. The weekend will also include a Truck Series and Xfinity Series race, making it the busiest 48 hours in motorsports.

The Cup races will likely be shorter than the usual 400-milers run at the 2 1/2-mile track.

Pocono CEO Nick Igdalsky said it was his "full intention to lobby for the 400s." The track will hold two oval Cup races and Igdalsky said the track has "no intention" of switching one of the races to its road course configuration.

Igdalsky said NASCAR was still trying to figure out the qualifying procedures.

"It's an opportunity to do something pretty creative," Igdalsky said.

Igdalsky said Pocono was approached by NASCAR over the Daytona 500 weekend about the idea of running a twinbill.

"I feel this initiative is important enough where it would last for more than one year," he said. "Getting a one-year shot at this just doesn't seem realistic to me. I anticipate us trying this for a couple of years and see where it ends up."

Pocono said it will not raise ticket prices for next season, and kids 12 and under can still attend a race for free.

NASCAR recently announced the $2 billion purchase of International Speedway Corp., an aggressive move to gain control of key racetracks. The family-owned raceway is not for sale.

"Open for bids? Hell no," Igdalsky said. "I always like hearing the numbers, but I can't see any number that anybody would dangle in front of us that would make us interested. We love being a part of it. We're here to continue a legacy."

The series heads to Michigan International Speedway where Clint Bowyer is the defending race winner. Hamlin promised a better race at Michigan.