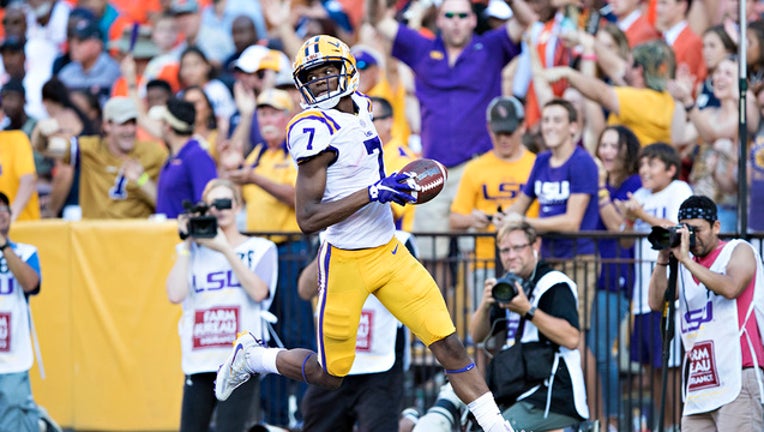 DJ Chark #7 of the LSU Tigers returns a punt for a touchdown in the second half against the Auburn Tigers at Tiger Stadium on October 14, 2017 in Baton Rouge, Louisiana. (Photo by Wesley Hitt/Getty Images)

JACKSONVILLE, Fla. (AP) - The Jacksonville Jaguars have selected LSU receiver DJ Chark in the second round of the NFL draft, giving them a big and speedy pass-catcher to replace Allen Robinson.

The Jaguars chose the 6-foot-3 Chark with the 61st overall pick Friday night.

Chark was college teammates with Jaguars running back Leonard Fournette, the fourth overall pick in the 2017 draft. Both wore No. 7 at LSU, which annually gives the number to its top playmaker.

Chark likely will share repetitions with Marqise Lee, newly signed receiver Donte Moncrief and Keelan Cole as a rookie. All four have enough speed to help loosen up defenses and create more space for Fournette.

Chark covered the 40-yard dash in 4.34 seconds at the NFL scouting combine. He also turned heads at the Senior Bowl.

Chark caught 66 passes for 1,351 yards and six touchdowns in three seasons with the Tigers, never playing alongside a notable quarterback. He had 40 receptions for 874 yards and three scores as a junior in 2017.