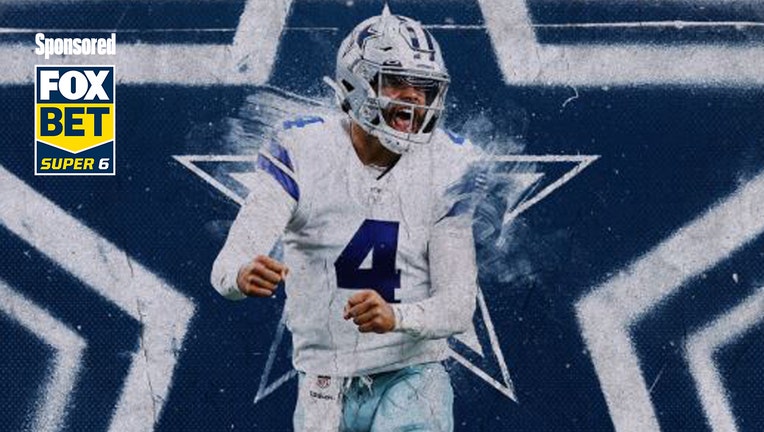 $50,000 is up for grabs in the FOX Bet Super 6 America's Game of the Week Challenge. Find out how you can cash in on Cowboys-Packers! (FOX Sports)

America's Game of the Week between the Cowboys and the Packers on FOX will be one for the ages.

The big showdown has all the elements of a Sunday soap opera. The silver stars, the cheeseheads, a head coach returning to his old stomping grounds, a bombastic team owner whose personality precedes him everywhere he goes, Aaron Rodgers' potential demise and some Odell Beckham rumors.

What more could you ask for?

Truthfully, we wish we could fast-forward to Sunday to watch these two iconic franchises battle for the win.

That's right — FOX Bet Super 6 and the NFL have dedicated a very special contest just for this matchup where you can win $50,000!

America's Game of the Week FOX-NFL challenge is a free-to-play contest in the FOX Bet Super 6 app where you pick six different outcomes from this marquee matchup. From the team with the most rushing yards to the total points scored in the game, predict all six perfectly, and you could be on your way to a $50,000 payout.

Forget about spending cash on Powerball tickets; our contest is free. And it's fun and very easy to play. And people really do win!

All you have to do for your chance at becoming our next lucky winner is download the FOX Bet Super 6 app on your mobile device and get your picks in before the big game kicks off this Sunday.

And just in case you need some help with your picks, we've got you covered.

How many total points will be scored in the game?

In their 49-29 victory over the Bears, the Cowboys showed us they can put up big points. An offense that features Dak, Zeke (if he's healthy), Tony Pollard and CeeDee Lamb could equal offensive fireworks — especially when facing this Green Bay defense.

On the other hand, the Packers are still struggling to find an offensive identity. But based on Aaron Rodgers' post-game presser after last week's loss to the Lions, he is upset. I expect an angry Aaron to let the pigskin fly.

Which team will have the most passing yards and how many will they have?

Since Dallas likes to rely on the run game, we give the edge to the Packers here.

Which team will have the most rushing yards and how many will they have?

This is all Dallas.

Cowboys rush the rock an average of 28.1 times per game. And their 1.3 rushing TDs per matchup is tied for third-best in the league. This season, the Cowboys are averaging 131.5 yards per game. The Packers are averaging 120.7 in that category.

Dallas will do damage on the ground against Green Bay this weekend. Book it!

Which team will have the longest punt, and how long will it be?

Packers punter Pat O'Donnell has posted a 72-yard punt this season, which is tied for the eighth longest in the NFL this season.

Pat the Punter will strike again in this matchup.

Which team will have the longest field goal, and how long will it be?

However, the Cowboys will force the Pack into situations this Sunday where the kicker will need to save the day.

Which team will win and by how many points?

This is coach Mike McCarthy's return to Lambeau, and he has said, "I really want to win that game." Dak is on a post-injury hot streak. The Packers are on a five-game skid and are being led by a disgruntled quarterback.

So many storylines jampacked into a single 60-minute matchup, making this game even more intriguing.

But Dallas will own those 60 minutes and escape Lambeau with its seventh win of the season.

Are you ready to try your luck at winning 50 grand on America's Game of the Week?

Download the FOX Bet Super 6 app right now and make your selections. This could be the weekend you strike green on Sunday's biggest game!