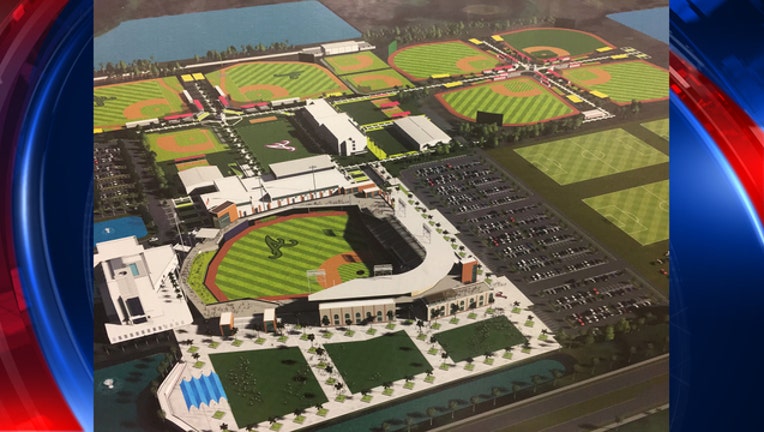 NORTH PORT, Fla. - The Atlanta Braves may soon have a new spring training site along the Gulf Coast of Florida.

Tuesday, the city of North Port approved the development agreement for the proposed facility. The franchise has been "exclusively negotiating" with the city and Sarasota County for several months to move their facilities there from Kissimmee.

The Braves have been training at Disney’s ESPN Wide World of Sports Complex, but their lease on Champion Stadium is up at the end of the 2018 season. The team in the past has expressed a desire to be closer to more Grapefruit League teams.

The move to the estimated $100 million complex on about 70 acres would put the Braves between the winter homes for the Baltimore Orioles in Sarasota and the Tampa Bay Rays in Port Charlotte along Interstate 75 corridor. The move also put them on the exact opposite side of Florida from NL East rivals the New York Mets.

The stadium plans call for 6,500 fixed seats and 1,500 berm seats with the outfield dimensions mimicking those of SunTrust Park.

The complex will also include a team clubhouse, training facilities, a half-dozen practice baseball fields, six multi-use fields and space for the team's sports medicine academy.

It will eventually become part of a planned mix-use town center which would include a new elementary and middle school campus.

Atlanta considered other possible sites, including Palm Beach County, before locking in on Sarasota County as a proposed home for spring training in 2019.

This is the last apparent hurdle before moving forward with the project. No word on the next step or a possible groundbreaking.