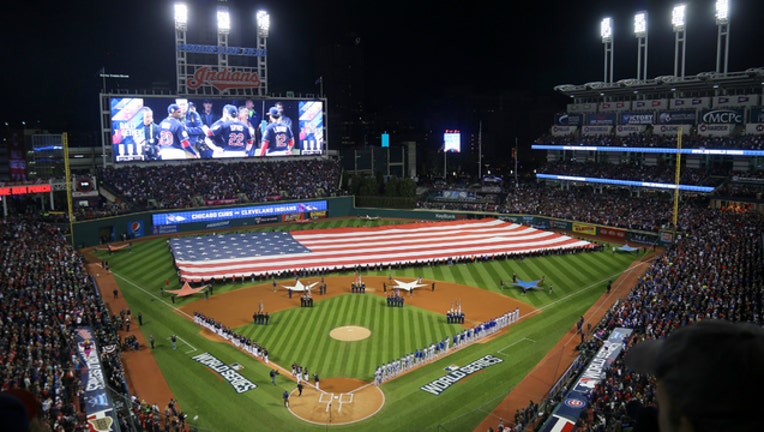 CLEVELAND (AP) - Most fans around the country can sit back and savor Game 7. Not so easy for anyone who has spent a lifetime rooting for the Cubs or Indians.

All those years of hope and heartbreak collide Wednesday night when Chicago and Cleveland meet one last time this season to decide the World Series.

With the Cubs seeking their first championship since 1908 and the Indians trying to stop a drought that dates to 1948, the stakes could hardly be higher.

"No one says Game 3 or 5. This is what you want," said shortstop Francisco Lindor, who leads the Indians with a .364 Series average.

"The game has changed," the 76-year-old Lolich said Tuesday. "It's a totally different game than what we played back in our days. It just doesn't happen."

Addison Russell hit a grand slam and tied a Series record with six RBIs in Chicago's 9-3 win Tuesday night that forced this captivating matchup to the limit.

Chicago is trying to become the first club to overcome a 3-1 Series deficit since the 1985 Kansas City Royals and the first to do it by winning Games 6 and 7 on the road since the 1979 Pittsburgh Pirates.

Now it's one night, winner take all.

Even after losing two straight, the Indians remain confident.

Kluber is 4-1 with a 0.89 ERA in four postseason starts, starting with 16 consecutive scoreless innings against Boston in the Division Series and Toronto in the AL Championship Series.

A 30-year-old right-hander, Kluber started on three days' rest for the first time in his big league career in Game 4 against the Blue Jays. He left after five innings with the Indians trailing 2-1 in a 5-1 defeat, then threw 88 pitches over six innings as Cleveland beat the Cubs 6-0 last Tuesday in the Series opener.

He came back on three days' rest in Game 4, needing 81 pitches for six innings of one-run, five-hit ball in a 7-2 win that gave Cleveland a 3-1 lead.

"Obviously, he's a special guy," Hendricks said. "You can just see it, the way he takes to the mound. He's always locked in."

Nine pitchers have won three starts in a single Series, none since Lolich went 3-0 with a 1.67 ERA and 21 strikeouts while tossing three complete games against the St. Louis Cardinals.

"Good players, good pitchers, can do special things. He's in that category," Indians manager Terry Francona said. "It was kind of an easy decision after talking to him."

The 2014 AL Cy Young Award winner, Kluber was 18-9 with a 3.14 ERA this season as Cleveland won the AL Central for the first time since 2007. His win in the All-Star Game at San Diego in July gave the American League home-field advantage in the Series.

"I never connected those dots at that point in time," he said.

Already, he is the first pitcher to win Games 1 and 4 in the Series since Cincinnati's Jose Rijo in 1990. In addition to Lolich, the only others to win three Series starts were Charles "Deacon" Phillippe of Pittsburgh and Bill Dinneen of the Boston Americans (1903), the New York Giants' Christy Mathewson (1905), the Philadelphia Athletics' Jack Coombs (1910), Pittsburgh's Babe Adams (1909), Cleveland's Stan Coveleski (1920), Milwaukee's Lew Burdette (1957) and Bob Gibson (1967).

"This is the ultimate dream," he said. "When you're out in your backyard as a kid, playing Little League at the field with your friends, this is the moment you dream about: Game 7, 3-2, two outs, something like that, bottom of the ninth. But it's always Game 7 of the World Series."

Behind the starters, Chicago closer Aroldis Chapman has thrown 62 pitches in the last three days. Cleveland's Andrew Miller hasn't pitched since Saturday and closer Cody Allen has been rested since Sunday.