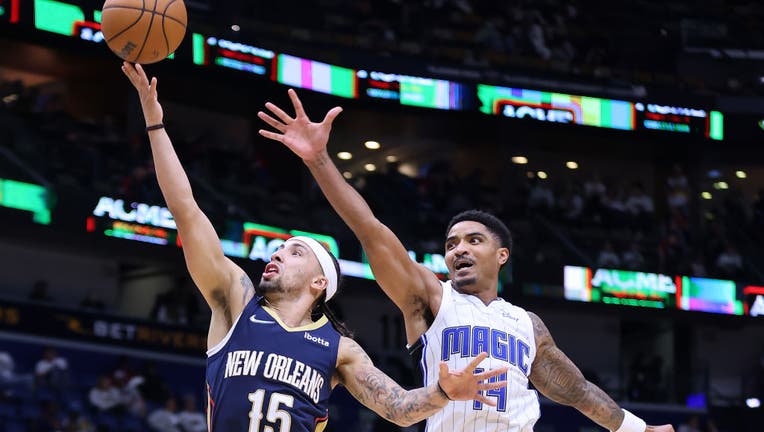 NEW ORLEANS, LOUISIANA - MARCH 09: Jose Alvarado #15 of the New Orleans Pelicans shoots against Gary Harris #14 of the Orlando Magic during the second half at the Smoothie King Center on March 09, 2022 in New Orleans, Louisiana. NOTE TO USER: User ex

Terrence Ross scored 12 of his 14 points in the fourth quarter, highlighted by a pair of 3s and a 360-degree, right-handed dunk that helped Orlando stunt a New Orleans comeback bid that had briefly cut the Pelicans' deficit to six. He capped his night with a pair of clutch free throws with 10 seconds left.

Franz Wagner had 15 points for Orlando, which snapped a two-game skid by leading for nearly the entire game, and by as many as 16 points.

CJ McCollum scored 32 for the Pelicans, who were playing without leading scorer Brandon Ingram (hamstring) and have lost three straight on the heels of a four-game winning streak. Jonas Valanciunas had 30 points and 15 rebounds for New Orleans.

Despite shooting 22.6% (7 of 31) from 3-point range, the Pelicans got as close as 103-100 when McCollum hit a shot from just inside the 3-point line with 13 seconds to go, but Chuma Okeke made two free throws, and Valanciunas cut the lead to three once more before Ross's free throws all but sealed it.

The Magic's lead got no larger before halftime, but the Pelicans also never got closer than 11 in the period, hindered by 35.4% (17 of 48) shooting overall during the opening 24 minutes, when they missed 12 of 15 from deep.

Wagner's cutting layup on a feed from Anthony put the Magic up 56-41 at halftime.

New Orleans rallied to tie the game in the first nine minutes of the third, during which McCollum scored 14 on a combination of jump shots and runners, including a 3 that tied it at 73 and brought the crowd to its feet. Valanciunas scored 10 of his points during that same stretch, hitting four times from between eight and 13 feet.

But only moments after New Orleans tied it, Okeke's driving layup as he was fouled ignited an 10-0 Orlando run that also included Harris' 3, and the Magic took an 83-73 lead on Harris' reverse layup early in the fourth quarter.

Pelicans: New Orleans announced shortly before tip-off that Ingram will be out at least a week because of a strained right hamstring that has already caused him to miss two games this week. The timeline for Ingram's recovery would have him miss at least three more games. ... While injured forward Zion Williamson had returned from Oregon to New Orleans to continue rehabilitation of an offseason foot injury, he did not attend the game. ''He will be part of what we're doing moving forward with practices and games in the future,'' Pelicans coach Willie Green said. ''I'm not sure if we'll meet and do all of that, but he's definitely a part of our group and we'll see him tomorrow and the next few days.''

Magic: Host Minnesota on Friday night in the first of six straight at home.

Pelicans: Host Charlotte on Friday night in the second of four straight at home.