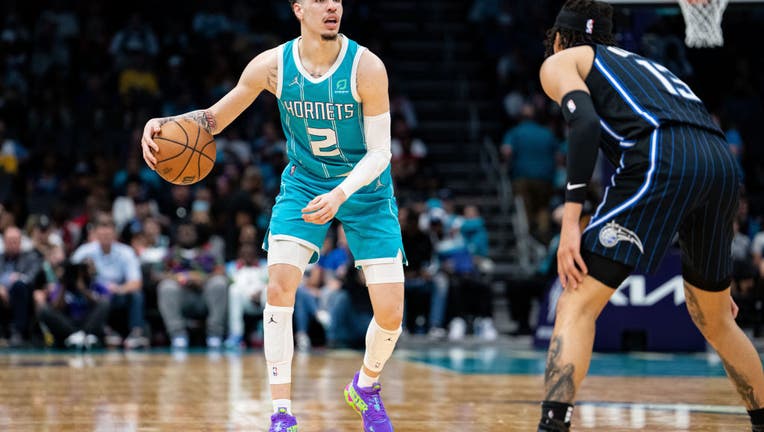 CHARLOTTE, NORTH CAROLINA - APRIL 07: R.J. Hampton #13 of the Orlando Magic guards LaMelo Ball #2 of the Charlotte Hornets in the fourth quarter during their game at Spectrum Center on April 07, 2022 in Charlotte, North Carolina. NOTE TO USER: User e

CHARLOTTE, N.C. (AP) - LaMelo Ball had 26 points, nine assists and eight rebounds, and the Charlotte Hornets routed the short-handed Orlando Magic 128-101 on Thursday night to get back on the right track after two lopsided losses.

Terry Rozier added 22 points as Charlotte pulled within one game of the Atlanta Hawks and Brooklyn Nets, who are tied for eighth place in the Eastern Conference with two games remaining in the regular season. The Hornets have already locked up a spot in the play-in tournament and are hoping to improve their seed.

Chuma Okeke had 20 points and Moritz Wagner scored 17 for Orlando, which has lost seven of its last eight games.

The game included a shoving match between several players in the fourth quarter with the Hornets up by 25 points, resulting in Orlando’s Robin Lopez and Admiral Schofield and Charlotte’s Montrezl Harrell being ejected. Lopez and Schofield waved to the crowd as they left the floor.

Charlotte broke the previous franchise record for points scored (9,081) in a season, surpassing the mark set in the 2018-19 Hornets season.

But offense hasn't been the issue of late.

The defense has been another matter, as Charlotte entered the game having surrendered 144 points in back-to-back road losses to the Philadelphia 76ers and Miami Heat.

But Charlotte held the Magic to 40% shooting on the night.

The Hornets built a 23-point lead in the first half and remained in control the rest of the way. The highlight of the night came when Ball made a steal at midcourt, and went between the legs with the ball in mid-air and threw a perfect pass off the glass to the trailing Harrell for a two-handed dunk.

Emotions were running high early on.

Charlotte's Cody Martin dunked over Wagner and several Hornets, including P.J. Washington, began talking trash from the sideline. Wagner responded on the next possession with a reverse dunk and proceeded to stare down the Hornets bench.

That preceded the dustup in the fourth quarter that occurred when Jalen McDaniels fouled R.J. Hampton on a drive. Several players began pushing each other under the basket, but no punches appeared to be thrown. Officials met for more than a minute before the ejections were handed out.

Hornets: Gordon Hayward's left foot clearly hasn't completely healed. After missing 22 games with a left ankle sprain, Hayward returned to play 17 minutes against Philadelphia on Saturday, but he has since missed the last two games since with left foot soreness. ... Miles Bridges was voted the winner of the inaugural Rick Bonnell Award given to the Hornets player who best works with the media. Bonnell was an NBA sports writer for the Charlotte Observer who died last year.