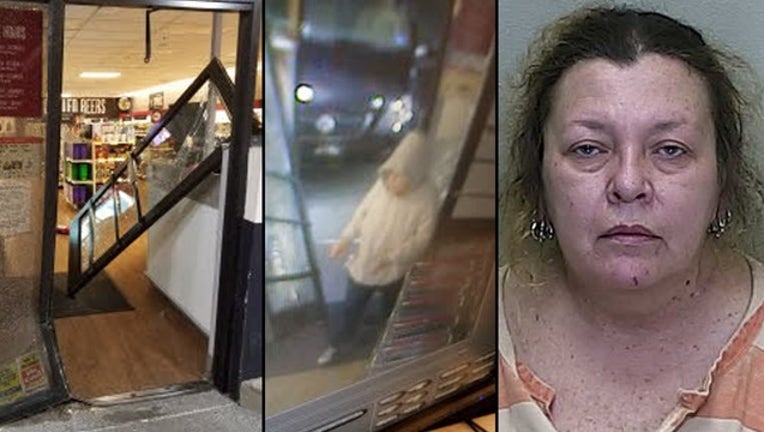 BELLEVIEW, Fla. (FOX 35 WOFL) - A woman was arrested after she drove a vehicle into a Bellieview liquor store and then stole a bottle of Jim Bean.

The Belleview Police Department says that officers responded to a Winn Dixie liquor store on south U.S. Highway 301 on Tuesday in reference to an alarm. Responding officers observed that the front door was damaged to the point that a person was able to make entry.

Video was received and officers say that a female ran a Nissan Altima into the store, entered, and stole a $23.99 bottle of Jim Bean.

The assistant manager of the store reportedly told officers that he recognized the person as the female that lived next to the store.

The Belleview Police Department stated in their incident report that the suspected vehicle was then located at an apartment on southeast Campbell Road. Responding officers noticed damage to the front of the vehicle, which was consistent with the damage observed on the building.

A Sergeant reportedly knocked on the door of the apartment. Hannah Ruttimann came to the door and stated that she and three others were inside. Hannah was shown a photo of the suspect and she confirmed that it was Suzanne, one of the three others in the apartment. The Sergeant soon made contact with Suzanne and identified her as the suspect in the commercial burglary.

According to the incident report, Suzanne said she was too intoxicated to walk, so the Sergeant assisted her out of bed and into a wheelchair. The other ladies in the apartment told the Sergeant that Suzanne had a problem with alcohol and needs help bad. They even said that she has not eaten in five days and has only been consuming alcohol.

While waiting for an ambulance to respond, the Sergeant spotted a bottle of Jim Bean behind the driver seat of the damaged car.

Suzanne was transported to the Summerfield Emergency room to be cleared and then to the Marion County Jail.

The total cost of damage to the building may be close to $5,000, according to police.