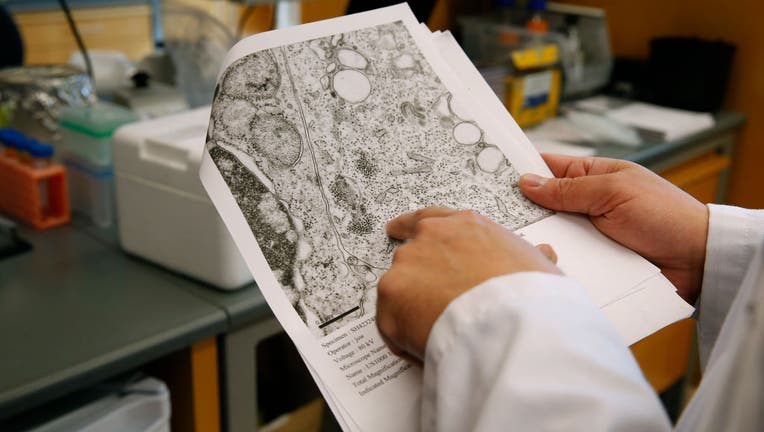 Dr. Charles Chiu reviews microscopic imagery in his lab at the UCSF Mission Bay campus in San Francisco, Calif. on Friday, Feb. 24, 2017. Chiu has published findings on his research about the effects of paralysis in children with the Enterovirus D68

ATLANTA - The U.S. Centers for Disease Control and Prevention is alerting pediatricians to be on the lookout for a rare, serious respiratory illness affecting children.

The agency recently issued a health advisory late last week about Enterovirus D68, or EV-D68, saying healthcare providers and hospitals in several regions across the country had notified the CDC last month about increases in pediatric hospitalizations.

What is Enterovirus D68?

According to the CDC, Enterovirus D68 is a respiratory illness commonly seen in children that can range from mild to severe infection. It is one of more than 100 non-polio enteroviruses.

Some people may not come down with any symptoms while others may experience a runny nose, sneezing, cough, body aches, and muscle aches. More severe symptoms can include wheezing and difficulty breathing.

What is the difference? COVID-19, the flu, the common cold

Health experts advise getting tested by a health care provider but here are some key differences between COVID-19, the flu and the common cold as told by a nurse educator.

The virus is likely to spread from person to person through an infected person’s cough, sneeze or touch of a surface.

There’s no specific treatment for the virus but hospitalization may be required.

The CDC urges people to protect themselves by properly washing hands and not touching the face.

The CDC warns that infants, children and teenagers are more susceptible to the virus because they do not have immunity from previous exposure to enteroviruses. Children with asthma are also found to be at a higher risk for severe respiratory illness.

The CDC said the last EV-D68 occurred in the U.S. during the summer and fall of 2014. From mid-August 2014 to January 15, 2015, CDC or state public health laboratories reported that 1,395 people contracted the illness.

Almost all of the cases involved children.