BRADENTON, Fla. - A Bradenton woman is still confused, upset, and terrified after U.S. Marshals appeared at her front door and entered – armed and without a warrant – Friday morning.

Kada Staples says she feels violated and traumatized. The young mother is still scared and shaken up from what happened.

"We were taking a nap and my Ring doorbell kept alerting me that there was motion detected," Staples recalled.

Staples was napping with her 3-month-old daughter when she opened the app.

"When I clicked on it, there was two men standing there in bulletproof vests with guns pointing at my door," Staples said. 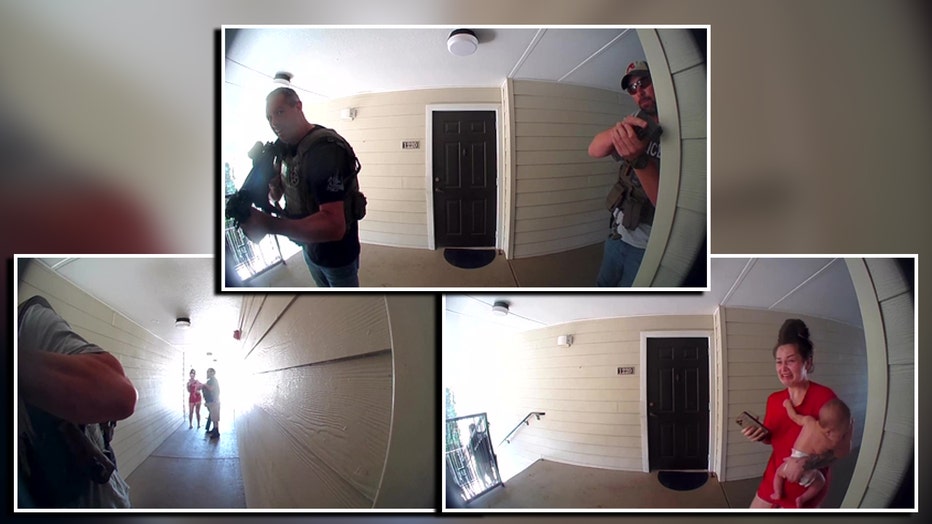 "U.S. Marshals. Come to the door!" a marshal can be heard yelling in the video from her doorbell camera.

The group from the U.S. Marshals Florida Caribbean Regional Fugitive Task Force was looking for a suspect wanted by the Manatee County Sheriff’s Office for homicide.

"Tell him to come out with his hands up," one of the officers yells to the camera. "We know he’s in there.  The place is surrounded."

When she cracked her door, she says the marshals ushered her out, leading her down the breezeway.

"There was probably seven or eight guys out there with guns. Three of them run in my apartment with no warrant or anything and are just running around," she said.

Staples says the encounter only lasted about three minutes. She says the marshals left as quickly as they came.

The U.S. Marshals Service told FOX 13 News that Staples’ apartment was never their target, but the team saw a man matching the suspect’s description near her unit. In a statement, the U.S. Marshals Service said the man entered the breezeway adjacent to Staples’ unit. They claim they were "engaged by a woman in [Staples’ unit]" but that officers never entered her unit.

"If the resident had not made contact with the team through the Ring doorbell, the team would not have had any contact with anyone at [Staples' apartment]," the agency said.

However, the video from Staples’ doorbell camera shows U.S. Marshals appear to have approached the door and then held the door open before realizing they were at the wrong apartment.

The U.S. Marshals Service says they arrested the suspect, Shamar Johnson, inside a nearby apartment.