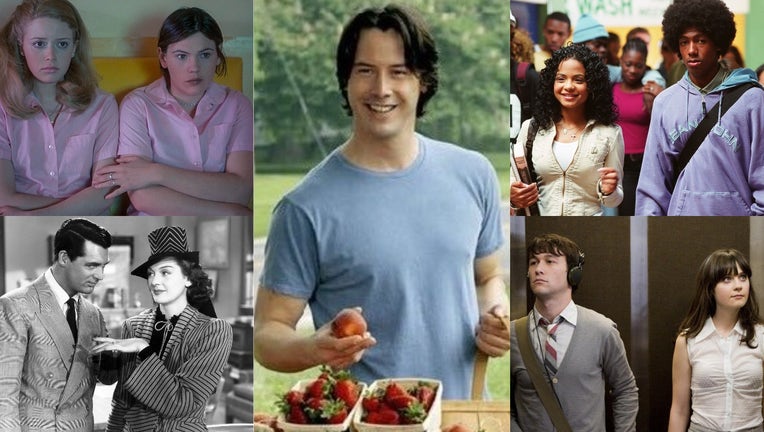 Left, from top: Natasha Lyonne and Clea Duvall in "But I'm a Cheerleader!", Cary Grant and Rosalind Russell in "HIs Girl Friday." Center: Keanu Reeves in "Something's Gotta Give." Right, from top: Christina Milian and Nick Cannon in "Love Don't Cost

CHICAGO - Whether they’re set in the English countryside in the 1810s, New York in the 1960s or the Hamptons in the 2000s, there’s nothing like a romantic comedy to offer some laughter, joy and escapism. So just in time for Valentine’s Day, we’ve rounded up a list of delightful rom-coms from all different eras — all of which are streaming for free on Tubi.

These 9+ films cover more than two centuries of human history and 80 years of Hollywood filmmaking, proving that the combination of romance and comedy really is timeless.

Read on to find your perfect Valentine’s Day movie match. And if you’re in the mood for something more serious, you can also check out our guide to the best romantic dramas.

Other than William Shakespeare, there’s no one more influential on the modern day romantic comedy genre than Jane Austen. And the early 19th century novelist gets one of her best-ever adaptations in this winning romance from director Ang Lee and writer/star Emma Thompson. With its classic story of polar opposite sisters — the reserved, responsible Elinor (Thompson) and the expressive, emotional Marianne (Kate Winslet) — "Sense and Sensibility" basically delivers two rom-com storylines in one. So whether your dream is to hit it off with a charmingly humble Hugh Grant or get stuck in a dramatic love triangle with Greg Wise and Alan Rickman, there’s something for everyone here.

Grab your typewriter and throw on your best pin-stripped suit for this iconic screwball comedy about the best newspaper woman in the biz. Cary Grant is hard-boiled editor Walter Burns and Rosalind Russell is his star reporter (and former wife) Hildy Johnson. When Hildy announces she’s leaving her career to settle down with a boring insurance man, however, Walter knows he needs the story of the century to rope her back in. And boy do they find it in an execution-turned-jailbreak that leads right back to their own press room. Director Howard Hawks famously encouraged his actors to speak as fast as humanly possible, giving this film a signature snappy style that’s been oft-imitated but seldom topped. Indeed, "His Girl Friday" proves that great things can happen when you take a play originally written about two male coworkers and add in some fiery rom-com flair.

This special little film defies easy categorization. It’s sort of a rom-com about a nebbish guy (Jack Lemmon) trying to woo the elevator girl of his dreams (Shirley Maclaine). And it’s sort of a humanistic drama about what it takes to be a good person in an oppressive, corrupt system. Either way, "The Apartment" is a timeless romantic classic that feels just as fresh today as it did in 1960. A hit with both critics and audiences, "The Apartment" cleaned up at the Oscars, winning five out of 10 of its nominations, including Best Screenplay, Best Director and Best Picture. So sit back and enjoy this sharp, savvy, poignant film from its playful opening sequence to its all-timer of a final line.

Before he was McDreamy on "Grey’s Anatomy," Patrick Dempsey was Ronald Miller — the ultimate ‘80s teen nerd. Hoping to up his cred at school, Ronald pays his popular cheerleader neighbor Cindy (Amanda Peterson) $1,000 to pretend to be his girlfriend for a month. And if you don’t know where this is going, you’ve probably never seen a romantic comedy before. Released during a boom in teen rom-coms that also included the likes of "Pretty In Pink" and "Say Anything," "Can’t Buy Me Love" set the template for future bet/fake dating teen comedies like "10 Things I Hate About You," "She’s All That" and "To All The Boys I’ve Loved Before." But though it hits some familiar beats (Cindy gives Ronald a makeover! He learns a lesson about staying loyal to your real friends!), it’s still a charming watch with a sweet message.

Once you’ve watched 1987’s "Can’t Buy Me Love," be sure to check out this 2003 remake that casts Nick Cannon as the teen dweeb and Christina Milian as the object of his affection. Though this version takes its title from a Jennifer Lopez song, instead of a Beatles one, the story beats are mostly the same: Cannon’s Alvin pays Milian’s Paris to pretend to be his girlfriend and get him in with the popular crowd. As the attention starts to go to Alvin’s head, however, he loses sight of what really matters in life. Thankfully his dad Steve Harvey and his friend Kenan Thompson are there to help set Alvin straight as he and Paris start to develop real feelings in their fake relationship.

For a romantic comedy that’s just a little bit off the beaten path, try this delightful cult classic starring a 19-year-old Natasha Lyonne. Lyonne plays Megan Bloomfield, an all-American cheerleader who’s sent away to a gay conversion camp when her parents and friends start to suspect that she’s secretly a lesbian. Ironically, it’s not until Megan is at the oppressive "True Directions" conversion program that she begins to realize she does actually like women — specifically Clea Duvall’s rebellious bad girl Graham Eaton. And while that sounds like the plot of a heavy drama, director Jamie Babbit takes a whimsical, satirical approach in a colorful rom-com that rejects repression and reclaims queer romantic joy.

Jack Nicholson is an aging cad who only dates younger women. Diane Keaton is a divorced playwright who thinks she's over love. What happens when they wind up stuck in a house in the Hamptons together? Well, something's gotta give, of course! This frothy romantic comedy established writer/director Nancy Meyers as a major figure in the rom-com genre, and helped kick off a new trend of romances starring women over 50. Keaton and Nicholson generate great chemistry together in their first and so far only onscreen pairing. And it's hard to say which is dreamier: The sweet supporting turn from Keanu Reeves or the movie's to-die-for kitchen.

At a time when the rom-com genre was starting to become increasingly formulaic, "(500) Days of Summer" offered a breath of fresh air. The inventive film hops around in time to chart the rise and fall of the romance between Tom Hansen (Joseph Gordon-Levitt) and his dream girl Summer Finn (Zooey Deschanel). But as Tom sets about trying to win Summer back, the movie challenges whether his view on things is really the correct one. Filled with creative filmmaking, two charming central performances and perhaps the best sequence ever filmed at an IKEA, "(500) Days of Summer" quickly became something of a modern indie rom-com classic — even if its message has sometimes been misunderstood by fans.

Before writer Dan Fogelman took America’s tear-ducts by storm with his layered family drama "This Is Us," he revitalized the rom-com genre with this twisty look at life and love. Ostensibly, the central premise of "Crazy, Stupid, Love." hinges on Steve Carell trying to win back his wife (Julianne Moore) after she asks for a divorce. But, let’s face it, what really made this movie a hit is the off-the-charts chemistry between Ryan Gosling and Emma Stone as the movie’s secondary couple. The scene where the duo reenact the lift from "Dirty Dancing" is one of the best rom-com moments of the past two decades. And that alone is reason enough to give this one a rewatch. Pair it with "La La Land," and you’ve got the perfect mix of sweet/poignant Valentine’s Day viewing.

More romances streaming (for free!) only on Tubi

Howard High (2020): A modern-age "Bring It On," "Howard High" is an energetic teen musical that follows a high school performance group who must compete against a rival school in order to save their arts program. The crowd-pleasing film from "You Got Served" director Chris Stokes is inspired by his 2020 TV mini-series of the same name, which is also streaming on Tubi. With its talented cast of up-and-comers, "Howard High" shines a light on the challenges that school arts programs face in underfunded neighborhoods — all through the power of song and dance. "Howard High" is a Tubi Original. Rated TV-14. 102 minutes. Dir: Chris Stokes. Featuring: Chrissy Stokes, Veronika Bozeman, Lindsay Diann, Jarell Houston, Dylan Mooney.