President Donald Trump and his Democratic challenger, Joe Biden, speak of their handling of the coronavirus outbreak.

The United States topped 100,000 new daily COVID-19 cases on Wednesday, setting a new record for cases in a single day as the country awaits the outcome of the presidential race in a chaotic year with high stakes.

On Nov. 4, the country reported 103,087 new daily virus infections, according to data compiled by the COVID Tracking Project. The grim milestone comes as new daily infections were rising in all but three states.

The U.S. death toll has surpassed more than 232,000 people, and the seven-day rolling average for new daily deaths is  rising, according data. The U.S. also leads the world in total confirmed coronavirus cases with more than 9 million.

Hospital officials in Iowa and Missouri warned bed capacity could soon be overwhelmed without serious efforts to curtail the virus spread.

The seven-day rolling average of Iowa's positivity rate reached 36.4% over the weekend, the third-highest in the nation behind South Dakota and Wyoming, according to researchers at Johns Hopkins University. Hospitalizations reached a record 730 on Monday.

“We are again in danger of losing control of this pandemic in Iowa,” Suresh Gunasekaran, CEO of the University of Iowa Hospitals & Clinics, warned in a statement this week. “Our COVID positivity rates skyrocketed twice before, but this is the first time we have seen rates this high while also dealing with record patient hospitalizations.”

As the country awaits an approved vaccine, public health experts have warned of dire consequences as the seasonal flu, holidays and the winter months approach.

“Where we are is in an extremely dire place as a country. Every metric that we have is trending in the wrong direction. This is a virus that will continue to escalate at an accelerated speed and that is not going to stop on its own,” said Dr. Leana Wen, a public health expert at George Washington University.

Dr. Susan Bailey, president of the American Medical Association, also said there are things Americans can do now to help change the trajectory.

"Regardless of the outcome of the election, everyone in America needs to buckle down,″ Bailey said.

“A lot of us have gotten kind of relaxed about physically distancing, not washing our hands quite as often as we used to, maybe not wearing our masks quite as faithfully. We all need to realize that things are escalating and we’ve got to be more careful than ever,” Bailey added.

Mayra Ramirez was generally healthy prior to becoming infected with the virus.

Polls showed the public health crisis and the decimated economy were top concerns for many American voters. They have been competing issues that President Donald Trump and Democratic challenger Joe Biden view through drastically different lenses.

Trump has ignored the advice of his top health advisors, who have issued increasingly urgent warnings in recent days about the need for preventive measures. The president has also highlighted his own recovery from COVID-19 and falsely claimed the crisis “is going away” during the final presidential debate.

In contrast, the Biden campaign didn’t hold large, in-person rallies in the months leading up to the presidential race, opting instead for smaller, socially distanced events to signal the former vice president’s approach to the public health crisis. He pledged to work with state and local officials across the country to push mask mandates — and has rarely been seen in public without one.

The pandemic impacted both who voters chose at the ballot box and how they submitted their votes. More than 100 million Americans voted early, many by mail, amid health concerns about voting in person. Still, lines were long in many polling places with record turnout and safety precautions in place. 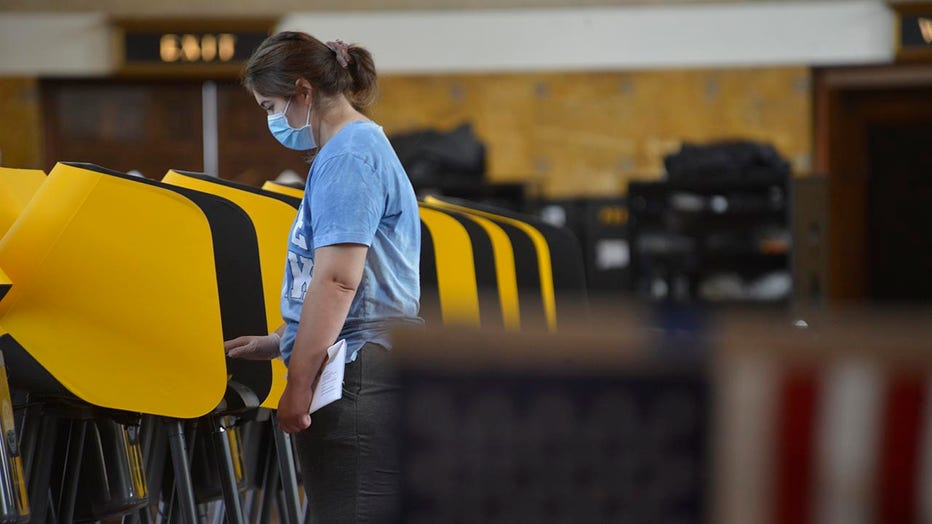 Voters cast their ballots at the polling place located within L.A.'s Union Station on Nov. 3, 2020 in Los Angeles, California.(Photo by Deccio Serrano/NurPhoto via Getty Images)

“It’s very serious that we have 400 people gathered in one space at the height of the pandemic here in Wisconsin. So, we’ve tried to take every measure to limit the movement throughout the room,” said Claire Woodall-Vogg, the election commission director of the city of Milwaukee.

Dr. Deborah Birx, the coordinator of the White House coronavirus task force, broke with the president this week and joined a chorus of Trump administration scientists sounding the alarm about the current spike in infections.

“We are entering the most concerning and most deadly phase of this pandemic,” Birx wrote in a memo distributed to top administration officials, initially reported by the Washington Post.

Birx added that the nation was not implementing “balanced” measures needed to slow the spread of the virus.

Dr. Anthony Fauci, the nation’s top infectious disease expert who is also on the coronavirus task force, has similarly raised concerns that the country was heading for a challenging winter if more isn’t done soon.

Fauci has grown outspoken that Trump has ignored his advice for containing the virus, saying he hasn’t spoken with Trump in more than a month. The rift became more apparent earlier this week with Trump suggesting at a campaign rally in Florida that he would “fire” Fauci.

In an interview last week, Fauci said he doesn’t anticipate a COVID-19 vaccine to be available in the U.S. until at least January 2021, if not later. That timeline is in contrast with statements made by Trump, who said Oct. 22 during the final presidential debate that a vaccine would be announced “within weeks.”

RELATED: Hosting Thanksgiving? Amid coronavirus pandemic, you may need to rethink your dinner plans: expert